Top 8 Things To Do In St. Petersburg 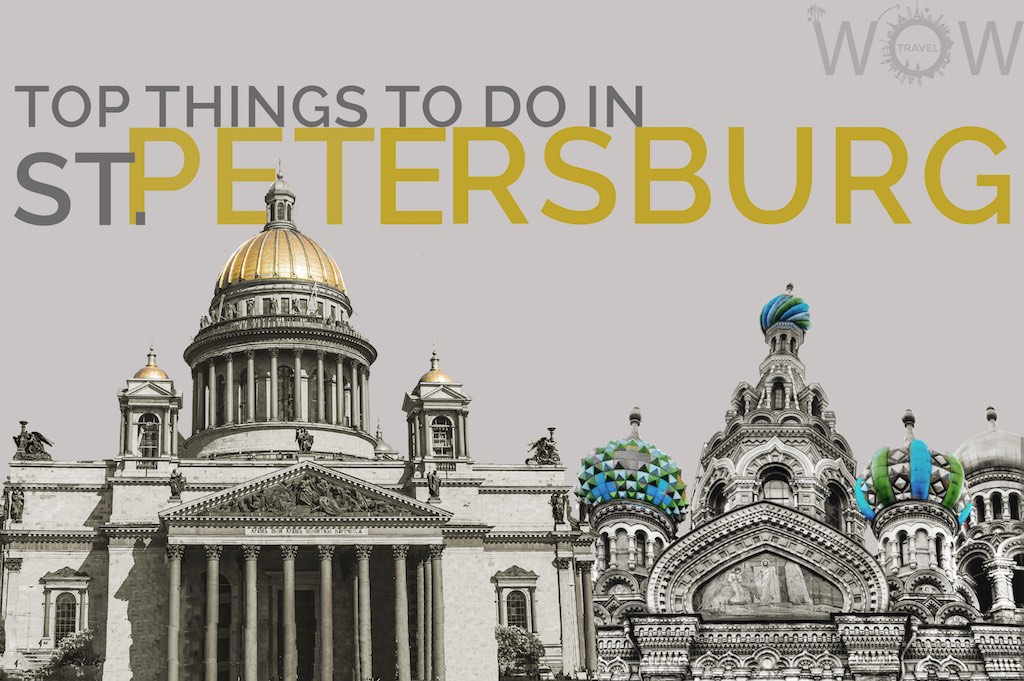 The famous and elegant city of St. Petersburg second largest city in Russia and one of the most developed cities as well. This metropolis has lots to offer, let’s not forget it was the capital of Russia for 200 years. A city filled with palaces that once belonged to the wealthiest families in Europe, almost 400 lavish bridges, 221 museums, 80 theaters, luxurious hotels, great restaurants and excellent shopping malls. This city was conceived to be an example of westernization, industrialization, and revolution and it lives up to it. Although it suffered a lot during the country’s various wars, St. Petersburg began to recapture some of its lost splendor in 2003 when UNESCO designated the city as a World Heritage site. Since around the end of the 20th century, a great deal of active building and restoration works have been carried out in a number of the city’s older districts. Saint Petersburg has significant historical and cultural heritage and is considered a highly attractive tourist destination. To many people, it seems like a cold and boring place but they are wrong. It is indeed a vibrant, culturally rich European city, with lots to do. WOW Travel shares with you The Top 8 Things To Do In St. Petersburg.

St. Isaac’s Cathedral was originally the city’s main church and the largest cathedral in Russia. It was built between 1818 and 1858, by the French-born architect Auguste Montferrand, to be one of the most impressive landmarks of the Russian Imperial capital. One hundred and eighty years later the gilded dome of St. Isaac’s still dominating the skyline of St. Petersburg. Although the cathedral is considerably smaller than the newly rebuilt Church of Christ the Savior in Moscow, it boasts much more impressive fades and interiors. Source: saint-petersburg.com

The Winter Palace is one of the most splendid buildings in St. Petersburg. Almost all the Romanovs starting from Catherine the Great resided there. The palace had hundreds of rooms; many of them were State Halls the interiors of which are preserved till the present days and open to visitors.

The Peter and Paul Fortress is a symbol of St.Petersburg and one of the few remaining fortresses of the 18th century, the burial place of Russian emperors, as well as a former political prison of Russia. It was the one the history of St. Petersburg began with. On the teretorry of Zayachy Island, where the fortress stands on, just behind its wall, recided the main beach of the city. You can enjoy the marvelous view on Neva River and Heritage from there, but swimming is forbidden at the moment. Source: petersburg4u

Church of the Savior on Blood

Savior on the Spilled Blood is an architectural landmark of central St Petersburg, and a unique monument to Alexander II the Liberator. It features Russia’s largest collection of mosaics (over 7,000 sq.m.), Italian colored marbles, decorative stones from the Urals and Altai region, as well as a collection of Russian heraldic mosaics.

Nevsky Prospect was the main thoroughfare of the city and a main artery for commerce and transportation. The development of the Nevsky Prospect throughout the 18th and 19th century represented the evolution of the city from one dominated by the Imperial Court to a vibrant economic center and the main industrial center for the county. Today Nevsky prospekt is still the main commercial thoroughfare thoroughfare, and remains the pulse of the city. Nevsky Prospekt is life in Russia on display, with street vendors and exclusive Western boutiques (ranging from Hugo Boss to Versace), cathedrals and parks, cafes and canals.

Kazan Cathedral, also known as The Cathedral Of Our Lady Of Kazan, features an impressive stone colonnade, encircling a small garden and central fountain. The construction was started in 1801 and continued for 10 years. Upon its completion the new temple replaced the Church of Nativity of the Theotokos, which was disassembled when the Kazan Cathedral was consecrated. The cathedral was intended to be the country’s main Orthodox Church. After the war of 1812, the church became a monument to Russian victory. Nowadays it is considered one of the most historical and architectural sites of Russia.

Sometimes known outside Russia as the Kirov, this is the city’s premier cultural venue. Named after Maria Alexandrovna, the wife of Alexander II, the building dates from 1860 but stands on the same site as a wooden theater erected in 1765. The hulking exterior is hardly inspiring, but the glittering multi-tiered interior is a jewel among St. Petersburg’s aging auditoriums. The theater is famous for the Kirov Ballet Company, but it is best known for opera. Source: Marriot

Whereas the Hermitage was the Winter Palace, the Peterhof Palace was the Summer Palace. The Peterhof Palace often referred to as “the Russian Versaille”, is a series of palaces and gardens located approximately 30 km (19 miles) from St. Petersburg. Peter the Great took his inspiration from Versaille when he chose to build the imperial palace, which now includes a famous system of fountains, including the truly spectacular Grand Cascade. Like almost all of St. Petersburg’s suburban estates, Peterhof was ravaged by German troops during the Second World War. Thanks to the work of military engineers and over 1,000 volunteers, most of the estate’s major structures had been fully restored by 1947.