Top 12 Things To Do In Ashgabat 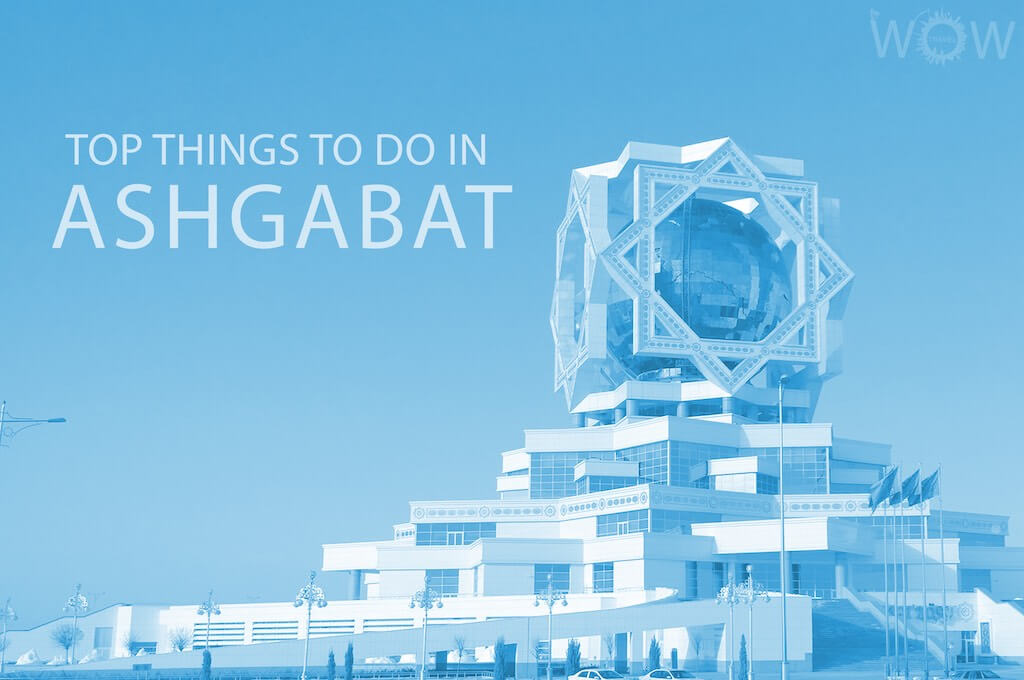 Settled in the central part of Asia near the Caspian Sea lies an arid land that goes by the name Turkmenistan. Ashgabat is situated towards the southern part of this country bordered by the Karakum Desert on one side and the Kopet Dag mountain range on the other side. This city reeks of grandiosity and also happens to be the capital of Turkmenistan. The city is filled with museums, mosques, art galleries and is quite a suitable spot for art enthusiasts and those who just want a relaxing time. It is a relatively new city with its roots set back in 1881 and was styled by the Russians.

All one needs to do is just travel 11 km from Ashgabat and reach the doors of the largest mosque in Central Asia- the Turkmenbashi Ruhy Mosque. This mosque was very recently built between 2002 and 2004 and like all other modern structures, it is grand. Constructed from white marble, with a dome and 4 minarets. The minarets are erected to a special height of 81m to mark the year 1991, the year of Turkmenistan independence.

Turkmenistan has seen bizarre turns of events since its birth under the regime of Saparmurat Niyazov who tried to free Turkmenistan of all its non-Turkmen influences. President Niyazov happens to be a published author and his first published work was the Ruhnama. The Ruhnama is a book that discusses the Turkmenistan code and is an attempt to implement “Turkmen ways” into the daily lives of the people. Niyazov also erected a grand monument in honors of his book, which he deems are God’s own words and reading the book is a direct ticket to heaven.

The Arch of Neutrality is a debatable piece of architecture- where some find it to be one of the grandest monuments of the world; others tend to believe that the architecture of this monument is quite blasphemous. It is the tallest monument in Ashgabat, standing tall at 55m on three pylon supports. At a height of 21.5m, there is a café welcoming visitors and offering a luxurious panoramic view of the entire city. The elevator is then transparent and takes all the way up to 50m.

A large building designed with a modernistic approach, the Carpet Museum in Ashgabat it has the largest collection of carpets in Turkmenistan on display. This museum should be visited only for the sheer number of well-labeled carpets if not for anything else. There are 8000 well preserved ancient carpets from around the world along with the largest carpet in the world as certified by the Guinness Book.

Nisa was one of the most important cities of the Parthian Empire and is now a UNESCO World Heritage Site. The strategic location that allowed it to dictate trade from all directions made it so important as well as a rich city. This is a place where a beautiful amalgamation of the traditional cultural features with the Hellenistic and Roman forms has taken place. This is an excavation site and displays the architecture of the Parthians to the highest precision.

Rukhiyet Palace in Ashgabat is an epitome of the Turkmen grandiose. Completely constructed from white marble, this immense monument features an attractive dome in aqua hue. The grand palace was constructed by the Bouygues, a French company. This palace is the house for all official meetings and discussions in Ashgabat. Various forums, exhibitions, inaugural programs are all held in this huge palace. Unlike the bizarreness of other buildings in other architectural structures in Ashgabat. This building is a reflection of good architecture and has an artistic overtone to it.

The Halk Hakydasy Memorial Complex is a monument built in honor of all those who lost their lives to natural or man-made calamities. This site houses three memorials, all of which stand for a different cause of death. Halk Hakydasy honors those who died in the great earthquake of 1948, martyred soldiers from the Second World War, and soldiers killed in various battles that the Turkmen fought.

The white-marbled city of Ashgabat, the name literally translates to “the city of love” has a wonderful main city park. Like other parks, it is filled with benches, intricate fountains and so on, but it also stands as a symbol representing the modern Turkmen. The showstopper on this park is a 118m high column, known as the independence monument. The top has a crescent with 5 stars that are indicative of the five tribes of Turkmen’s unity. The park is flagged by other giant structures such as five-headed-eagle fountains and statues depicting national heroes.

At a height of 133m, the Ashgabat Flagpole is the 5th tallest flagpole in the world. it was erected on the 26th day of June in the year 2008. Since that day this free-standing flagpole has been standing strong and unyielding. This is a wonderful site and should never be missed when on a trip to Ashgabat.

The Turkmenbashi’s Land of Fairytale is a theme and adventure park situated at the heart of Ashgabat. There are various fascinating rides to choose from within the park. The name comes from the daily animatronic shows depicting various fairytales from the Turkmenistan folklore. Flume rides through the mountains, ride in a river rapid, roller coasters, etc. are some of the other attractions featured in the park.

If one is looking for grand buildings and monuments around the world then Ashgabat is the place to be. Being a modern city all the buildings in Ashgabat is an epitome of grandiose and the Wedding Palace is no exception. An 11 storied building, this is the place in Ashgabat where civil registry of weddings take place. The building is divided into three tiers with each tire being shaped in the form of an 8-pointed star. All the tiers are aligned differently to prevent overlapping. The dome is a globe featuring a titanium-gold map of Turkmenistan surround by frames of 8-pointed stars.

The Kunya-Urgench is a place that depicts the history of Turkmenistan in a well-preserved fashion. It happens to be a UNESCO world heritage site because of the sheer number of old and antique monuments dating back to 11th to 16th century AD. Mosques and minarets, caravanserai, mausoleums and what not are available in this place all speaking out the stories of the Turkmen past.