10 Most Beautiful Mosques In The World 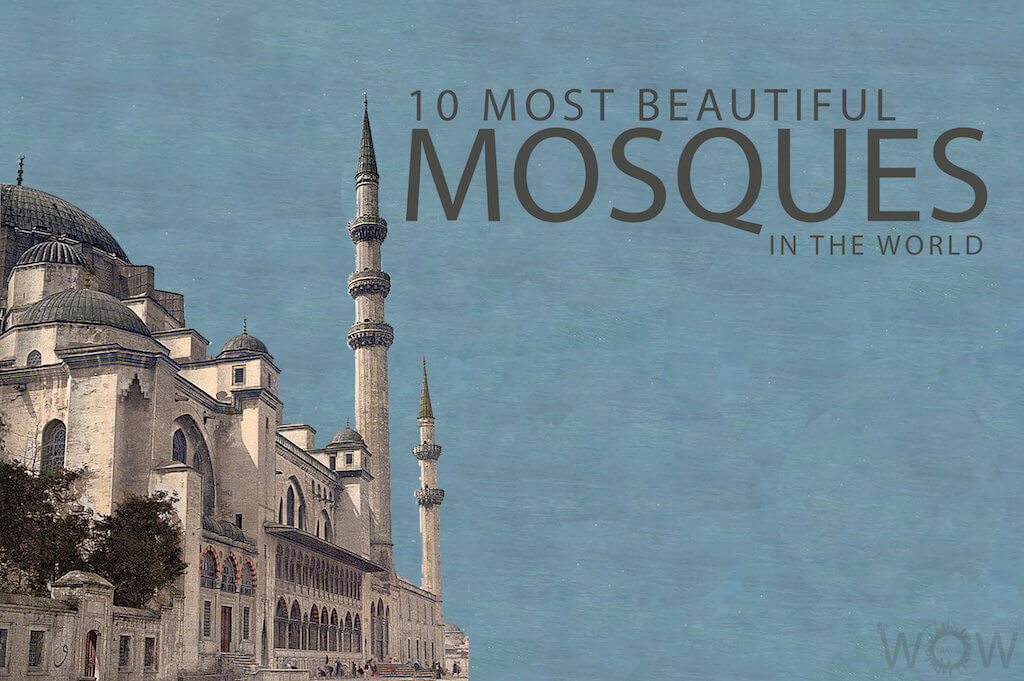 Muslims in the past and even today have made use of local artisans and architects to create beautiful, magnificent mosques. The architecture of mosques depends on where you are and when the mosque was built, and there are many different styles. Here is a list of  the 10 Most Beautiful Mosques In The World.

Located within the Kazan Kremlin walls, Qolşärif is the most prominent of the city’s mosques. It was completed in 2005 and was the biggest in Russia at the time of its construction. It was rebuilt on the site of the old Qolşärif Mosque that stood there since 1552. The Qolşärif Mosque was named after the Tatar imam who sacrificed his life while saving the city.

Located in Mecca, Saudi Arabia, the Masjid al-Haram is Islam’s most sacred mosque and it can accommodate up to 820,000 worshippers. This Holy Mosque is the only mosque that has no qibla direction, since Muslims pray facing the Ka’ba in the central courtyard. Every year about 2 million Muslims travel to Al-Masjid Al-Haram, where they perform a number of spiritual rites, in a process known as the Hajj. Performing the Hajj, is one of the five pillars of Islam, and all able-bodied Muslims should go at least once in their lives if they can afford it.

Sheikh Zayed Mosque in Abu Dhabi  is the largest mosque in the United Arab Emirates and can hold about 40,000 visitors in its many halls. Everything here is grand and extraordinary – It features 82 domes, over a 1,000 columns, 24 carat gold gilded chandeliers and the world’s largest hand knotted carpet. The mosque’s first ceremony was the funeral of its namesake, Sheikh Zayed, who is buried at the site.

The Sultan Omar Ali Saifuddien Mosque dominating the skyline of the city center of Bandar Seri Begawan,the capital of the Sultanate of Brunei. The Sultan Omar Ali Saifuddien Mosque accommodates approximately 3,000 people and it is said to be one of the most beautiful mosques in the Southeast Asian region. It is considered amongst the people of Brunei as the country‘s major landmark, symbolized the country’s official religion of Islam.

Completed in 1986, the Faisal Mosque (also known as Shah Faisal Masjid) is an exceptionally large and unique mosque in Islamabad, the capital of Pakistan. It was designed by Turkish architect Vedat Dalokay, shaped like a desert Bedouin’s tent, and soon became an iconic symbol of Islamabad throughout the world.

Built between 1610 to 1616, The Sultan Ahmed Mosque is a historic mosque in Istanbul and one of only a few in the world with 6 minarets. The mosque is popularly known as the Blue Mosque for the blue decorative İznik tiles adorning the walls of its interior. The 20,000 blue tiles adorning the interior were made in Iznik, an area that was famous during the Ottoman Empire for its expert production of ceramic tiles. These tiles also gave themselves to the name of the mosque.

Dome of the Rock Mosque, Jerusalem

The Putra Mosque is the principal mosque of Putrajaya in Malaysia. Construction of the mosque began in 1997 and was completed two years later. The pink-domed Putra Mosque is constructed with rose-tinted granite and can accommodate 15,000 worshippers at any one time.

The Badshahi Mosque in Lahore, commissioned by the sixth Mughal Emperor Aurangzeb in 1671 and completed in 1673, is the second largest mosque in Pakistan. Its beauty makes it one of the top things to do in Lahore. It used to be the largest mosque in the world till 1986 when the Faisal Mosque was constructed in Islamabad. One cannot escape the sight of the grand red-bricked Badshahi Mosque on entering the historical city of Lahore which links Pakistan’s northern and southern regions.