Top 8 Things To Do In Abu Dhabi 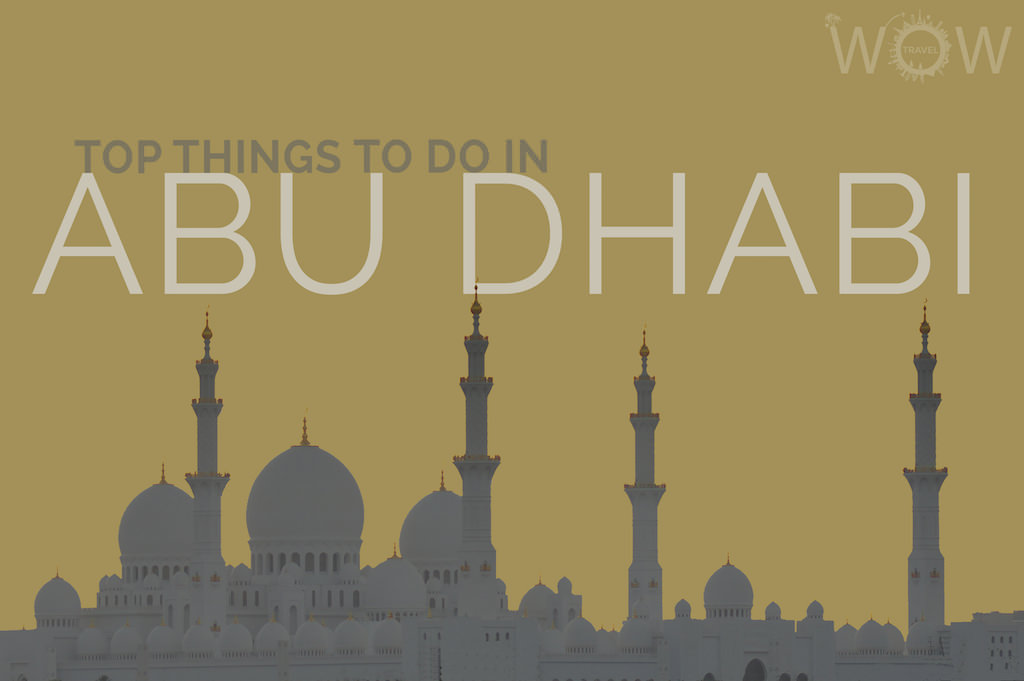 Abu Dhabi is rich in both natural beauties as well as in resources. While driving across the city and its surrounding oases, it feels like we are living the “One Thousand and One Nights”. Scenic wadis, colossal dunes and palm trees accompany tourists along with caravans of camels next to the roads. The city offers everything one can dream, but we encourage visitors to drive into the desert and enjoy the many spas, museums, and outdoor activities, along with the opportunity to experience Bedouin hospitality. Nowadays, Abu Dhabi’s wealth is most notable along its coast, where the skyscrapers, luxury hotels, and landscaped parks of the capital city welcome a mix of tourists, business travelers and foreign workers, all while keeping the Islamic heritage and Arab cultural roots of the Emiratis. It was an experience we will never forget. We invite you to visit the largest, wealthiest, and most powerful of the seven shaykhdoms and check it off your bucket list already. WOW Travel shares with you The Top 8 Things To Do In Abu Dhabi.

Situated on a 1600-square-meter site on the Breakwater, near Marina Mall and overlooking the Corniche, this heritage village is run by Emirates Heritage Club. Here you can journey to the past and experience traditional life in Abu Dhabi before oil revenues altered the landscape, economically and socially. Bedouin tents, palm-frond houses (‘arish), stone houses from the mountains,, old fishing villages and traditional souqs help to recreate life as it was. Given its location along the seafront, maritime traditions are a special feature. A shop sells local crafts. Source: uaeinteract

“This architectural work of art is one the world’s largest mosques, with a capacity for an astonishing 40,000 worshippers. It features 82 domes, over a 1,000 columns, 24 carat gold gilded chandeliers and the world’s largest hand knotted carpet. The main prayer hall is dominated by one of the world’s largest chandeliers, weighing twelve tonnes. The mosque’s first ceremony was the funeral of its namesake, Sheikh Zayed, who is buried at the site.” Source: abudhabi.ae

The Corniche is a strip of land stretching 8 km (5 miles) along the beach front. Here you can enjoy the view of the sea, while also taking in the skyscrapers for which the UAE is famed. Go for a jog in the morning, swim in the pristine waters of Corniche beach or relax in the shade of a tree. All of these activities are totally free, making the Corniche a refreshing option in pricey Abu Dhabi. In the evening, when the temperature starts to drop, you can enjoy the sunset with a nice meal in the restaurants and bars along the beach. Make sure you take a snap of the Volcano Fountain!. Source: topuniversities

The Alhosn Palace is a prominent historical feature in Abu Dhabi. The palace has a distinctive administrative and political record. In the past it functioned as the office and home for the Abu Dhabi ruler, government departments and courts of justice. The palace is the oldest stone building in the city of Abu Dhabi and the Sheikh Shakhboot Bin Zayed built it as a castle when the seat of government was moved from the Liwa Oasis to the Abu Dhabi Island in 1793. The interior of the Palace has been renovated and modernized, and is now used to house the Center for Documentation and Research, which holds a collection of documents on the heritage and history of the United Arab Emirates and the Gulf region.

Located on Level 74 of Tower 2 at the Etihad Towers complex, the Observation Deck at 300 is the highest vantage point in Abu Dhabi and offers stunning views across the city and Arabian Gulf while enjoying delicious refreshments, light snacks or scrumptious High Tea.

Yas Island is a man-made island in Abu Dhabi, home to some of the UAE’s most exciting attractions, Yas Marina Circuit (a Formula One racing), concerts, luxury hotels, restaurants and the Yas Waterworld with over 45 adrenalin-fuelled waterslides. Experience life at its richest, through adventure and entertainment at Yas Island!.

The Gold Souk on 4th Street in Madinat Zayed has many jewellers, including some of the Gulf’s largest. Apart from the souk, you’ll also find some big-name jewellers in the shopping malls, such as Cartier, Chopard and Tiffany & Co. Right next to it you will find the chaotic, eclectic and sprawling Madinat Zayed Shopping Center.

The Emirates Palace Hotel is an unprecedented luxury and one of the wotrld’s most expensive hotels in the heart of Abu Dhabi, built as a landmark showcasing Arabian culture. The palace is usually not opened to the public, but by booking a 45-minute guided tour, you will get to take a look at the suites, the ballroom, the auditorium and the private beach.