Top 12 Things To Do In Lahore 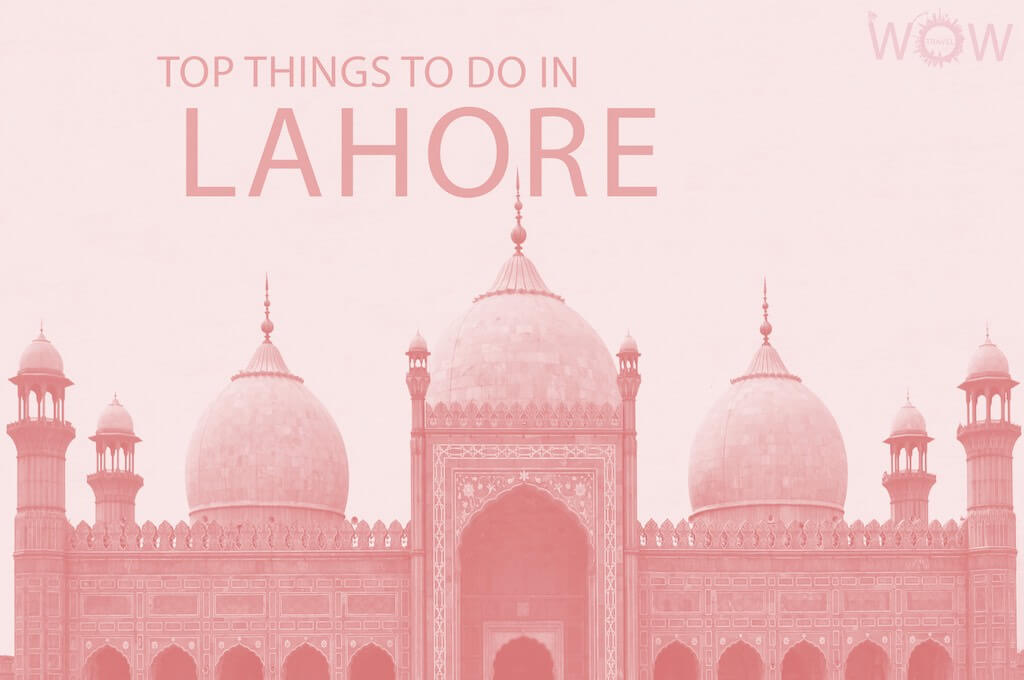 Lahore is the capital city of the Punjab Province of Pakistan. It is the second wealthiest city in Pakistan after Karachi. Its wealth is not only monetary but Lahore also displays a very rich cultural heritage. Dating back to days of Indus Valley Civilization, Lahore has been under the rule of various rulers ranging from Hindu Shahs to the Delhi Sultanate and even the Mughal Empire. A wide range of cultural diversity can be easily witnessed in Lahore owing to the varying rulers that have come to the place over thousands of years.

Built by the Mahmood of Ghazni in the 11th Century, the Lahore Fort or the SahiQuila stands as one of the most extraordinary structures in Lahore. It is speckled with a rich artistic overtone and is the place to be whether you are an art lover or not. The Lahore Fort covers a humongous area of 1400’ by 1115’ and houses oh so many palaces and gardens within its boundaries. A special mention should be made about the SheeshaMahal (Palace of Mirrors) and it is indeed a must-visit site within the fort premises.

The Badshahi Mosque is a grand structure that was devised by the sixth and a very prominent Mughal Emperor, Aurangzeb, in the 17th century. This is a gigantic mosque made completely out of red sandstone as was the fashion in those days. It is estimated that the mosque is so huge that it can house about 40000 devotees in just one prayer session! The mosque is a prime example of the Mughal grandiose and should not be missed for anything else when visiting Lahore.

Off the many sites of historical significance in Lahore, the Minar-e-Pakistan can be deemed as a modern inclusion. This Minar is a standalone structure bearing the Pakistani ideology upon its shoulders. The Minar is situated in Iqbal Park- it was here that the Lahore Resolution was passed in 1940 by the All-India Muslim League. The architecture is a fine blend of various architectural styles, significantly the Mughal, the Islamic and the modern styles of architecture!

Chauburji translates to four towers. This is also a Mughal era structure in Lahore, it is said that the construction of this structure is attributed to Shah Jahan’s eldest and most favorite daughter! The Chauburji is an excellent amalgamation of the Mughal architectural style blended exceptionally with the ancient Islamic styles of architecture.

The Hiran Minar owes its existence to Mughal Emperor Jahangir. The story behind its construction is quite interesting- Jahangir was fond of hunting antelopes, but then again, he also kept a pet antelope. Mistaken identity, stray shot, whatever the reason may be, this pet antelope was shot in 1606 by Jahangir and his hunting team. The grieve-stricken Jahangir then erected a 100 feet tall tower out of reverence for his dear antelope! The intriguing tale and the fine craftsmanship indeed makes this a must-visit spot in Lahore.

Data Darbar is a shrine dedicated to an Islamic mystic by the name of AbulHasan Ali Hujwiri. He was a great Sufi scholar and has even authored a book on Islamic philosophy. He was popular as Data GanjBaksh and hence the peculiar name of this shrine. The Data Darbar happens to be the largest shrine dedicated to the Sufis in South East Asia and witnesses as many as one million visitors every year, especially during the time of the annual urs festival.

If you travel just 7 km outside the city of Lahore, you will reach the Jallo Wildlife Park. It is one of the three extravagant wildlife parks of Lahore and is an impressive site to visit. It is spread over a humongous area of 461 acres and is quite a well-kept wildlife reserve. The park also houses a Forest Research Centre, restaurants and cafes, Wildlife Breeding Centres of its own and much more and deserves a visit.

The Wagah border is a gate that connects Pakistan to India. Since 1959, this historic site has witnessed a ceremonial parade between the Indian and the Pakistani soldiers in the evenings, when the flags of both the countries are pulled down. This ceremony is visited by guests from both countries and is one of a kind thing to witness. The energy and exuberance that flows among the visitors and the soldiers are quite addictive and this is going to be a sight that one remembers for a long time to come.

Another supreme example of the Mughal craftsmanship, the Masjid Wazir Khan was built under the rule of Emperor Shah Jahan. This grand building took only 7 years for its complete construction. A walk through the mosque is a kaleidoscopic journey because of the multitude of colors that one can witness. The beautifully colored calligraphy adorning the façade, the multicolored mosaic tiles are all such welcoming sights! This place is a complete contrast in color as compared to the ShahiQila and can serve as The Place for photography for those who like to frame every beautiful moment.

The Mughals are known for the extraordinary gardens and palaces that they have constructed over the years of their rule, and Shalamar Gardens is another example of their grandiose. Built-in 1641 by Emperor Shah Jahan, the Shalamar Gardens cover an astounding 80 acres. The central region of the garden features three terraces- the Hayat Baksh, the FaizBaksh, and the Farah Baksh. The garden is also speckled with multiple fountains constructed from the whitest white marbles which display the supremacy of the Mughal architectural styles.

Jahangir’s Tomb is another example of the Mughal architecture in Lahore. It is a 45-minute drive away from Lahore and is the place to be if you are looking forward to a peaceful time away from the cacophony of the city of Lahore. The green gardens filled with fragrant colorful flowers, and the tomb itself preserved in a fine condition promises a lovely time to enjoy one’s solitude and find one’s peace of mind.

The Eiffel Tower is situated in Paris, but Lahore has its version of it. Not as tall, not as grand, but a replica of the Eiffel Tower is there. The tower even has an elevator facility that takes one to the top whereupon one is gifted with a mesmerizing view of the entire city. This is a fine destination to set upon if you are looking forward to having a nice time with your family or a fun time with your friends.