The 8 Most Unique Forests Around The World 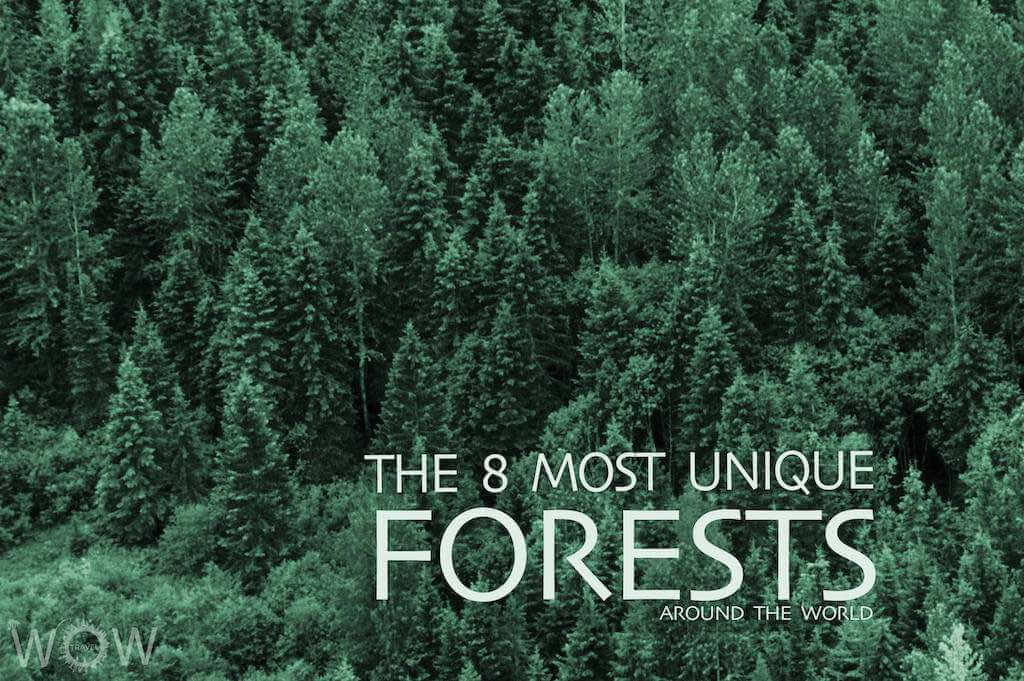 Forests make up nearly a third of our planet. They help make our planet hospitable to life; they purify the air, manage nutrients, capture greenhouse gases, create soil, play a role in weather systems and are the home to 80% of our terrestrial biodiversity. The following forests are visually stunning and unique. Enjoy the 8 Most Unique Forests Around The World.

In a small corner of western Poland, near the town of Gryfino, a strange woodland exists. This bizarre collection of curved trees, named the “Crooked Forest,” is shrouded in mystery and despite the numerous different theories that have been proposed over the years, no one truly knows what caused the trees to adopt this conformation. The Crooked Forest consists of around 400 pine trees that grow with a 90-degree bend at their base, the vast majority of which are bent northward. Curiously, the Crooked Forest is enveloped by a larger forest of straight growing pine trees. It is estimated that the trees were planted in the 1930s and that they were around 7-10 years old when they experienced whatever force/damage that resulted in trunk curvature. Source: iflscience.com

It is said that if there should be wonderlands on the earth, Jiuzhai Valley must be one of them. There is no equal elsewhere that has sceneries and fables of dreamlike eloquence, or natural purities like a fairyland as it. It is a great masterpiece of nature having dreamlike scenery, which combines blue lakes, waterfalls, verdant forests, snow-covered mountains, and the folk customs of the Tibetan and Qiang peoples.

The Amazon rainforest, covering much of northwestern Brazil and extending into Colombia, Peru and other South American countries, is the world’s largest tropical rainforest, famed for its immense biodiversity. It’s crisscrossed with thousands of rivers, the most exceptional being the powerful Amazon. River towns, with 19th-century architecture dating to rubber-boom days, include Brazil’s Manaus and Belém, Colombia’s Iquitos and Peru’s Puerto Maldonado. Source: Wikipedia

The Schwarzwald (Black Forest) comprises a swathe of deep-green woodland draped across the granite and sandstone mountains of Baden-Württemberg in south-west Germany. The Black Forest stretches north from Basel in Switzerland for about 160km to Pforzheim, with its western edge defined by the Rhine, and extends east for about 40 km (25 mile).

This 25,000 acre forest is actually a tree farm located in Morrow County, Oregon. The farm consists of thousands and thousands of hybrid poplar trees.The type of tree grown at the Boardman tree farm is actually called the “Pacific Albus”. It’s a hybrid of four to five different poplars, they achieve a better yield, grow faster, and use less water than their counterparts do.

Sagano Bamboo Forest is located within the Arashiyama district in the western outskirts of Kyoto covering an area of 16 square kilometers. It is one of the most beautiful natural environment in entire Japan, not only because of its natural beauty but also because of the sound the wind makes as it blows through the thick bamboo grove.

The Sequoia National Forest, named for the world’s largest trees, celebrates the greatest concentration of giant sequoia groves in the world. Protected within the Giant Sequoia National Monument, these groves and the areas around them are managed by the U.S. Forest Service for today and for future generations.