Top 12 Things To Do In Yerevan 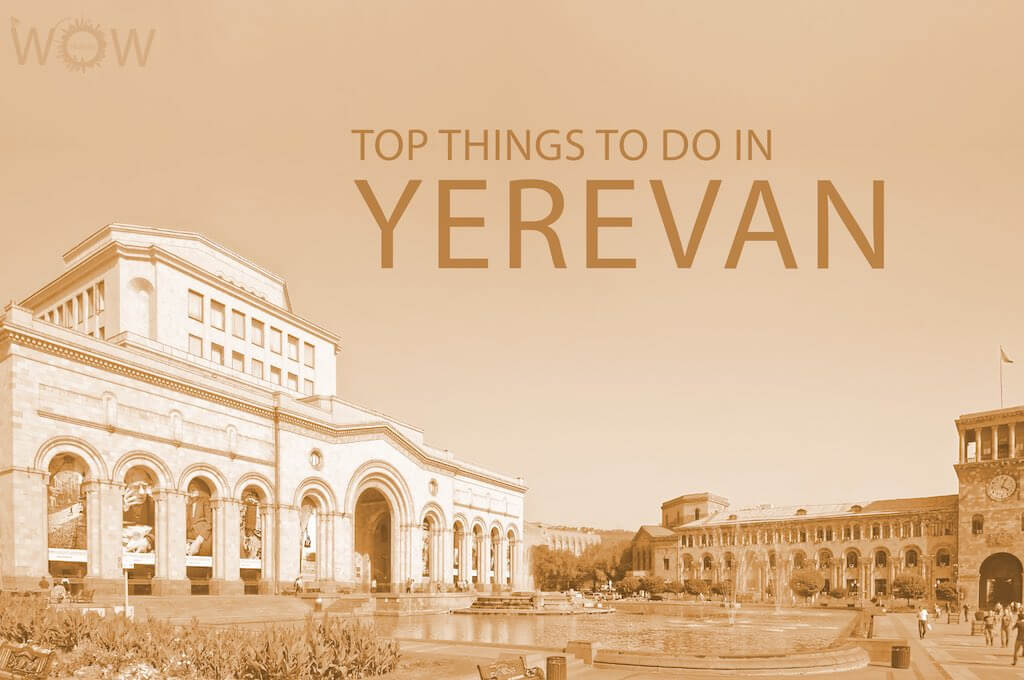 Yerevan is the capital city of the Republic of Armenia. This city is considered to be one of the oldest continuously inhabited cities in the world. The beautiful city dates back to the 8th century when the fortress of Erebuni was built by King Argishti I. The city has a number of beautiful landscapes as well as places to explore. This is the reason Yerevan is also considered to be one of the most popular tourist destinations in the country. Apart from amazing landmarks, the city is also famous for its extensive nightlife. Here are the top 12 things to do in Yerevan.
[booking_product_helper shortname=”yerevan”]

This museum is a tribute to the Soviet Armenian director and artist Sergei Parajnov and is considered to be one of the most popular tourist destinations within the city. The museum is a representation of the diverse artistic and literary heritage of the artist. Found in the year 1988, this museum is considered to be one of the cultural centers of Yerevan which are mostly known for its publications, exhibitions, and honorary receptions. It is a must-visit for all the art lovers.

The Cascade is known to be a giant stairway which is made up of limestone in the city. This place links the downtown Ketron area of the city along with the Monument neighborhood and is known to be one popular tourist destination among all the visitors. The construction of Cascade began in the year 1971 and it was partially completed in the year 1980. There are exterior steps underneath the Cascade and the exteriors are full of multiple levels embraced with fountains and other sculptures.

Republic Square is locally known as Hraparak in the city. This place sits in the center of the city in the Kentron neighborhood. This beautiful square took around 50 years to complete. You can easily spend your entire day here as it is home to a number of landmarks within the city such as the History Museum, the National Gallery, as well as Government House. The most appealing thing about this place is its musical fountains.

One of the most popular places in the city among the tourists at large is the Ararat Brandy Factory. You can take a tour of this place in order to learn more about the local spirit and can even try a sample on its ground. Thus, if you are a connoisseur of alcohol, you are certainly going to love this place. The Ararat Brandy Factory was produced since 1887 and is made using the spring water and local white grapes of Armenia. Get in touch with the different methods of the preparation of this drink during your tour.

This project started in the year 2006 and today, the Lover’s Park of Yerevan has become one of the most sought-after tourist attractions of the city. This park has beautiful traditional oriental gardens which are considered to be a haven for all nature lovers. This park covers a total area of 1.6 hectares. There is an artificial lake with two islands which is located on the eastern side of the park. There are two beautiful waterfalls in the park. This place is nature’s paradise.

The Medieval Monetary of Geghard is being partially carved out of the adjacent mountain that is surrounded by cliffs. This place happens to be one of the most popular tourist destinations of the city which has also been listed as a UNESCO World Heritage Site with enhanced protection status. The main chapel of this monastery was built in the year 1215 and the main complex was founded in the 4th century respectively. This monastery entertains various sacred beliefs among all the locals.

History Museum of Armenia is the best place to be in if you are a history and art lover as this museum showcases a collection of 400,000 objects to appeal to your tastes. This place was founded in the year 1920. 35 percent of the main collection at this museum is made up of archaeology related items. The other portions include items related to ethnography, numismatics, documents, and others. The museum publishes its works of architecture, archaeology, ethnography as the history of Armenia.

This is the Armenian Genocide memorial complex which is officially dedicated to all the victims of the Armenian Genocide. This place was built in the year 1967 on the hill of Tsitsernakaberd. Every year on the 24th of April, thousands of Armenians gather at this memorial in order to commemorate the victims of genocide. This place has also become a major tourist attraction of Yerevan over time. Many artists, musicians, politicians, athletes, and other celebrities have visited this memorial.

The beautiful Yerevan Opera Theatre is one of the places to be in when you are touring the amazing city. This place is located in the heart of the city and the building is considered to be the symbol of music culture that represents its luxury and classic beauty. The theatre was opened in the year 1933 and ever since then, it has been gathering tourists from all around the world. There are two concert halls within the theatre and in front of the building rests the Azatutyan Square where you can see two beautiful statues.

Also known as the Zoological Garden of the Yerevan, this zoo was established in the year 1940. At present, there are around 3000 individuals within the zoo which represent 300 different species. Thus, this place is a must-visit for any animal lover. The species within the zoo include Syrian brown bears, vipers, American mouflon, black vultures, red deer, lions, camels, tigers, Bactrian, moon bears, and many others. Take a day trip to the zoo to make the most of running into these animals.

Mother Armenia is known to be a female personification of Armenia. Her most public visual rendering comprises of this monumental statue in Victory Park which overlooks the capital city. This monument is considered to be a popular place for all the tourists and was unveiled to the world in the year 1962 after it was replaced by the statue of Stalin. The monument is a beautifully constructed statue that surely attracts a majority of people towards it.