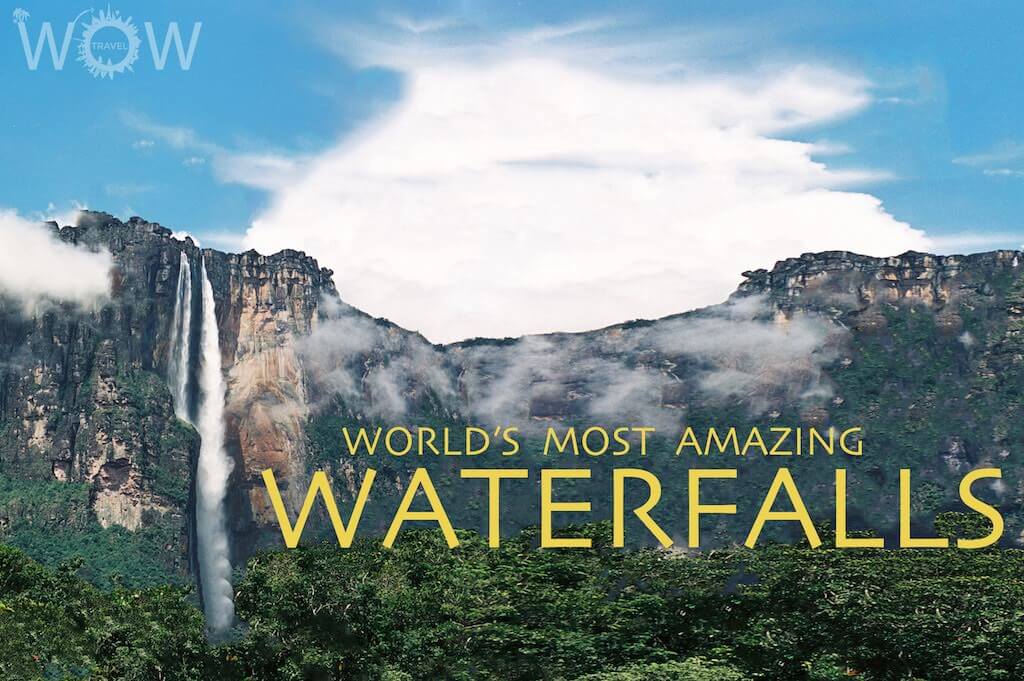 Waterfalls are one of nature’s most beautiful creations and come in all shapes and sizes. They are usually judged by their height, width or style or volume of water. Styles of waterfalls include tiered, cascades, horsetails or single drops (plunges). Some larger waterfalls contain multiple styles, showcasing cascades, tiers and even horsetails in one amazing waterfall. With thousands of waterfalls across the world, it was difficult to choose. Take a look at the World’s 10 Most Amazing Waterfalls.

Victoria Falls presents a spectacular sight of awe-inspiring beauty and grandeur on the Zambezi River, forming the border between Zambia and Zimbabwe. In more modern terms Victoria Falls is known as the greatest curtain of falling water in the world. Columns of spray can be seen from miles away as, at the height of the rainy season, more than five hundred million cubic meters of water per minute plummet over the edge, over a width of nearly two kilometers, into a gorge over one hundred meters below.  The wide, basalt cliff over which the falls thunder, transforms the Zambezi from a placid river into a ferocious torrent cutting through a series of dramatic gorges. Facing the Falls is another sheer wall of basalt, rising to the same height, and capped by mist-soaked rain forest. A path along the edge of the forest provides the visitor prepared to brave the tremendous spray, with an unparalleled series of views of the Falls.

Devil’s Pool is a natural rock pool on the edge of the Victoria Falls. During the dry season, Devil’s Pool is shallow enough that people can safely swim right to the edge before the waterfall drops more than 100 meters (300 ft). You don’t get swept down by the force of the falls because of a natural rock wall just below the surface. This is as close as you can get to the thunderous roar and permanent rainbows that adorn this magnificent Natural World Wonder.

At 3,212 feet, Angel Falls is the highest waterfall in the world. The water from the Río Gauja travels down Auyan Tepui, a sandstone plateau-mountain, and vaporizes into a column of fine mist by the time it reaches the bottom. The best way to see Angel Falls is by plane during the wet season (May to December).

Plitvice Lakes National Park in Croatia is the home of some of the most beautiful waterfalls on the planet, with 16 cascading lakes in crystal-clear shades of emerald and turquoise. Water flowing over the limestone and chalk over thousands of years have created the barriers, resulting in natural dams that form incredibly stunning waterfalls as well as rivers and caves.

The majestic wonder of the powerful waterfall is the centerpiece of the Park and proudly boasts being one of the most spectacular waterfalls in the world. Kaieteur Falls is undoubtedly the crown jewel of Guyana’s interior. Its thunder can be heard long before visitors glimpse this magnificent cascade. The Potaro River runs through the park falling over the Kaieteur escarpment to form the Kaieteur Falls. The Falls has a sheer drop of 226 meters (741 feet), a total height of 251 meters (822 feet), and during the rainy season, a width of 122 meters.  More than 136,200 liters of tannin-stained water, per second, shrouded in mist and pierced by rainbows, crash to the bottom of the rocky but lush gorge. Kaieteur is one of the highest, and the most spectacular, and powerful waterfalls in the world.

With 1902 feet, Sutherland Falls is the highest waterfall in New Zealand, but to see it you should either do a 4 days tramping Milford track or get a scenic flight. Sutherland Falls is a high volume waterfall of three steps in very quick succession along the Arthur River, which spills from a pair of sizable lakes carved into glacial basins high on a mountainside in New Zealand’s Fiordland National Park. The three drops of the falls stand 751 feet, 815 feet, and 338 feet tall respectively, occur in such quick succession that when viewed from the air the falls appear to be one long drop that impacts the bedrock in a few places.

Gullfoss is a magnificent waterfall located in southwest Iceland. Not particularly high (two 36 feet and 68 feet plunges), however, it is very beautiful. Due to a crevice, the river Hvítá seems to disappear into the abyss.

Yosemite Falls is one of the tallest waterfalls in North America with a total drop of 2,425 feet. The Lost Arrow spire is located adjacent to Upper Yosemite Fall. Yosemite Falls webcam is streaming live for the first time, thanks to Yosemite Conservancy donors.

Niagara Falls is the collective name for three waterfalls that straddle the international border between Canada and the United States. Arguably the most famous falls. This popular tourist destination offers double the fun, as both the Canadian and American sides are home to additional attractions. You can see the falls any time during the year, but you will have the best weather if you visit between mid-May and mid-September.

Niagara Falls comes to a halt AGAIN: Millions of gallons of cascading water is frozen in bitter temperatures

With an 830 ft drop these are among the highest falls in India. They are most impressive during the rainy season. Outside of rainy season, they’re like a parched man pissing in the desert.

Taller than Niagara Falls, twice as wide with 275 cascades spread in a horseshoe shape over nearly two miles of the Iguazu River, Iguazú Falls are the result of a volcanic eruption which left yet another large crack in the earth. During the rainy season of November – March, the rate of flow of water going over the falls may reach 450,000 cubic feet (12,750 cubic m) per second. The tremendous amount of water (an average of 553 cubic feet per second) thundering down 269 feet and the tropical location is one of a kind. Four times the width of Niagara Falls, Iguazu Falls are divided by various islands into separate waterfalls. You can admire the view of the falls from one of the most thrilling skywalks in the world here.