Top 7 Things To Do In Armenia 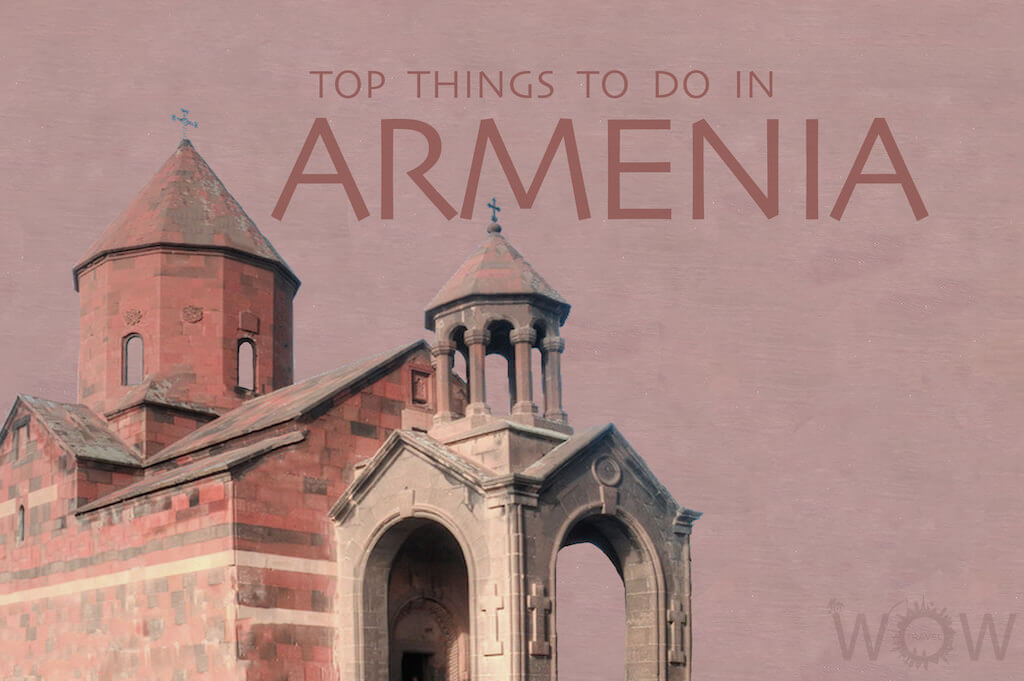 The first Christian nation, Armenia, is an ancient kingdom that has been passed from empire to empire until it gained its independence from the Soviet Union. Armenia is home to world heritage sites, old monasteries and a laid back, friendly culture. It is usually not the first country that will come into your mind but it is a real paradise on earth that not many people know. So if you want a vacation filled with culture, history and relaxation, here are the Top 7 Things To Do In Armenia.

Not far from Etchmiadzin on the way to Yerevan lie the ruins of the church of Zvartnots (church of the Guardian Angel or Celestial Angel), a colossal and unique masterpiece of Armenian architecture that was erected in the middle of the 7th century. The complex itself consisted of St. George temple or Zvartnots and the palace of Catholicos Nerses III, known as “Builder”. Once Zvartnots used to be the most magnificent church structure in Armenia. Now it resembles a cemetery of silent mysteries.

Tatev Monastery is a masterpiece of confluence of ingenious medieval architecture situated in the south-east of Armenia, on the very edge of a deep and narrow valley in which the Orotan River runs, near Tatev village. It is a 9th century historical monument, one of the oldest and most famous monastery complexes in Armenia. Tatev was also widely regarded as one of the most famous spiritual and educational centers of the Middle Ages. During medieval times Tatev Monastery was a vital scholastic, enlightenment and spiritual center and played a singular role in the country’s history.

Located in the city of Vagharshapat, Etchmiadzin Cathedral is the mother church of the Armenian Apostolic Church and a UNESCO herritage site. It dates back to the 4th century, making it the oldest Christian cathedral in world. Although the current sanctuary was erected in the 1600s, remnants of the 4th-century altar have been unearthed beneath the present structure. Originally the Cathedral was constructed from wood in the form of basilica. But in 483 it was reconstructed and made into cross-shaped building with a dome.

This antique city will always be top of the #best places to visit in Armenia. For one it’s the nation’s capital and for another, it is one of the oldest continuously inhabited cities in the #world. Thanks to its age, only the outskirts bear any sign of the Soviet grey sprawl, with the center being boulevards with cafés, rings of parkland, elegant squares, and some #beautiful 19th-century buildings. Yerevan has #everything you ask of a capital city, and its own special and unique flavor. There are museums aplenty, a zoo, a thriving entertainment scene, a trendy art scene and a very definite café culture. Make your visit unforgettable by staying at the best hotels in Yerevan. Source: allwomenstalk

Every advertisement for Armenia includes an image of Khor Virap Monastery’s stands before the snowcapped flanks of Mountain Ararat, the national symbol of Armenia. The Khor Virap (meaning “deep dungeon”) monastery is one of the most popular tourist destinations in Armenia. It features a jail cell, where Grigor Luisavorich was imprisoned for 13 years before curing King Trdat III of a disease. An event which had led to conversion of the king and Armenia into the first officially Christian nation in the world in the year 301.

The architectural complex of Garni, situated 28 km away from Yerevan, on the right bank of the Azat River, is one of the famous examples of ancient architecture. The pagan temple of Garni was built in the 2nd half of the 1st century during the reconstruction of the fortress (77 AD) and it is the only remaining intact model of Hellenistic architecture in Armenia. After the adoption of Christianity it became the summer residence of Khosorovdukht, the sister of King Trdat III. The temple is comprised of 24 columns and symbolized the 24 hours of the day. The temple remained standing until the 16th century, and was destroyed in 1679 because of the devastating earthquake in Armenia. Other than the Garni Temple, there are the Fortress of Garni, the khatchkars of Garni, the Garrison, the founding stone, the ruins of the Saint Sion Church, the ruins of Mashtots Hayrapet Church, the summer palace, King Argishti I’s cuneiform inscription and the royal baths.

Geghard is a medieval Armenian monastery located in the Kotayk province. Geghard was founded in the 4th century, but the main cathedral was built in 1215. Geghard Monastery  is surrounded by high walls on three sides and the mountain on the fourth. You can enter the churches which are interconnected. There are many caves around the monastery complex. During Middle ages Geghard Monastery became the spiritual center of the region which was under the  rule of Zakarian later Proshyan princes. Source: armenian-history