Top 10 Things To Do In Yekaterinburg 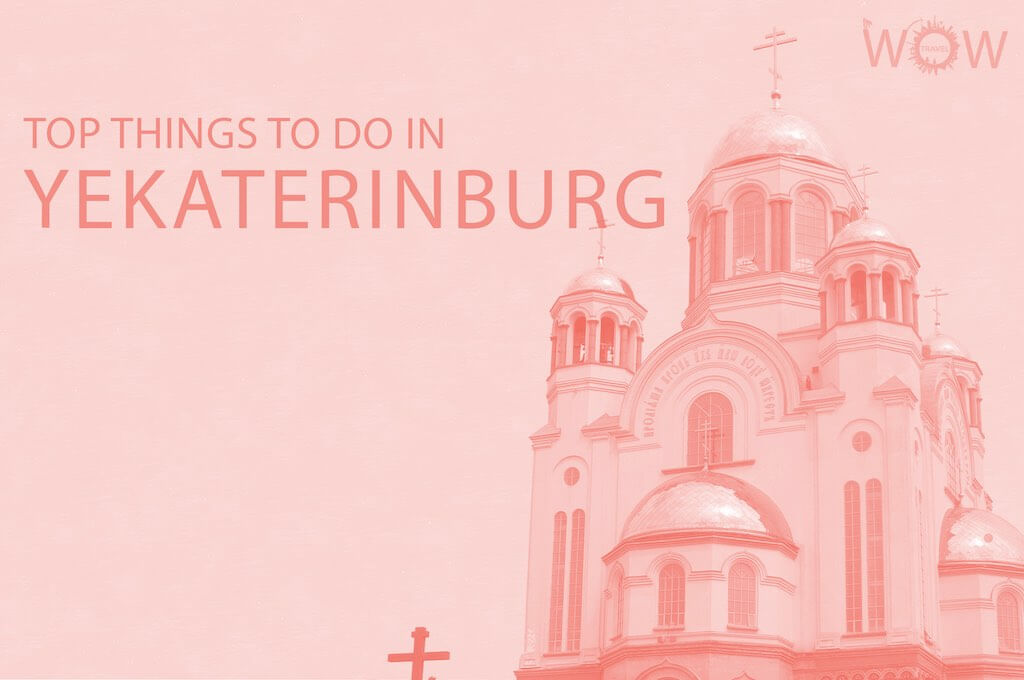 Perched on the banks of the Iset River smack dab in the middle of Eurasia, Yekaterinburg—or Ekaterinburg— is one of Russia’s biggest and most populous cities. It lies on the eastern slope of the Middle Urals, roughly 1,500 km east of Moscow. The city has been called the Window to Asia and travelers can say they stand with one foot in Europe and the other in Asia when they come to visit. Named after the 18th-century Russian empress Catherine I, Yekaterinburg was called Sverdlovsk from 1924 after Russia turned to socialism. Following the Soviet Union’s fall in 1991, the city re-adopted its historical name. Read on for the top 10 things to do in Yekaterinburg if you’re planning a holiday in this city of culture, history, and industry.
[booking_product_helper shortname=”yekaterinburg”]

Also called the Church of All Saints or Church on the Blood, this is one of the most popular Yekaterinburg attractions. The church, built in the Byzantine Revival style, stands on the site of the Ipatiev House, where Emperor Nicholas Romanov II and his family died by the hands of the Bolsheviks in 1918. The house’s demolition took place in 1977. In 2000, construction started on the church complex, and it was inaugurated in 2003. In the main church, the altar stands right over the Romanov family’s execution site. A museum honoring the Romanovs is also part of the church complex.

Russian for the word dam, Plotinka traces its beginnings to the 18th century. The dam’s original purpose was to harness the River Iset’s energy to provide power to a metallurgical plant. A support wall constructed over the dam in the 19th century connected Plotinka to what is Lenin Avenue today. The public garden, also created in the 19th century, features rocks taken from mines in the Urals. Nowadays, Plotinka is a popular city park where people can take leisurely strolls, enjoy picnics, and watch concerts and other public performances. It’s definitely among the most popular places to visit in Yekaterinburg.

Planning a holiday in the Urals with children in tow? Then this zoo should be on your list of the top 10 things to do in Yekaterinburg. Don’t let its small size fool you: it’s home to more than 1,000 animals, including polar bears, snow leopards, and tigers. Also within the premises are an aviary and an aquarium. Visitors can join activities such as the naming of baby animals. You’ll also find a small amusement park within the zoo complex where both kids and adults can have fun on various rides.

Located near the city center, the circus is another example of family-friendly Yekaterinburg attractions. The building, with its unmistakable lattice steel dome, ranks among the city’s most distinctive landmarks. Built in 1980, it can accommodate up to 2,600 spectators. Young ones—and the young-once—are in for a treat here since Russian circuses enjoy a fantastic reputation worldwide. You can expect exceptional entertainment from well-loved circus acts, from skillful jugglers to thrilling animal acts to the funniest of clown antics.

Visiting this quirky tourist attraction is one of the top 10 things to do in Yekaterinburg. Also called the QWERTY Monument, it’s a 2005 creation by Russian artist Anatoly Vyatkin. The keyboard has 104 concrete keys, each weighing between 100 and 1,000 pounds. Some of the keys went missing, taken by thieves. However, replacements were installed in 2011. The monument is also a major part of the local culture. On Sysadmin Day, on the last Friday of July every year, it’s the venue for a gathering by local technicians. It’s a fun-filled celebration with unusual competitions such as computer mouse-throwing and powerlifting with empty hard drives.

The Fab Four never played any concerts in the Soviet Union or Russia. But despite the government’s efforts to limit or censor Western influences during the 1960s, the Beatles’ music nevertheless made its inexorable way into the local consciousness. If you stroll the banks of the Iset River, you’re likely to come across the Beatles Monument: life-size cookie-cutter outlines of John, Paul, George, and Ringo. The installation is set against a red-brick wall, along with a line from the Beatles song The End. Unveiled in 2009 by the Beatles Fan Club of the Urals, it’s one of the most delightful things to see in Yekaterinburg.

Dating from the late 18th century, this church is one of the oldest of its kind in the city. It’s a blend of the Baroque and Neoclassical architectural styles, and its lofty tower forms part of the Yekaterinburg skyline. Consecration of the original altar, dedicated to the Nativity of Christ, took place in 1801. The primary altar was consecrated in 1818 when the church was finally completed. Ascension Church is a fine example of provincial sacred architecture, and it’s just as colorful as many of the city’s notable buildings.

A mere stone’s throw from Ascension Church, Kharitonov Palace is a grand house commissioned in 1794 by Lev Rastorguyev, a wealthy merchant and landowner. Like the church, this palatial structure sits perched on Ascension Hill. Rastorguyev’s son-in-law, Pyotr Kharitonov, inherited the property and installed passageways to connect its buildings. After Kharitanov’s imprisonment in 1837 for cruelty to his servants, the palace fell into neglect. The palace underwent restoration in the 1930s to house a youth center. Today, this Neoclassical structure and its beautiful English park are among the top places to visit in Yekaterinburg.

Situated on the city pond’s east bank, this historic house is more like a palace than anything. Its original owner, an 18th-century businessman named Nikolay Sevastyanov who grew rich from the Gold Rush in Yekaterinburg, had ambitious plans for the place. Once, he requested the Tsar’s permission to cover its roof with gold! Sevastyanov also never actually lived in this grandiose house. Instead, he decided to rent it to rich visitors to add to his wealth. More recently, the house served as the Yekaterinburg residence of the Russian President. Sebastyanov’s House combines elements of the Moorish and Gothic architectural styles, and visiting it is surely among the top 10 things to do in Yekaterinburg.

This bean-shaped lake is one of the oldest bodies of water in the Urals. It lies east of the city center and is one of the best places to visit if you’re a nature lover. It’s a beautiful sight to see, and there are plenty of things to do in and around the lake pretty much all year round. In summer, you can swim in its calm waters or work on your tan on the shore. During the cool months of spring and fall, you might want to go biking on the trail around the lake or explore the local flora and fauna in the nearby forest. In winter, it’s a great place for ice-skating.