Top 11 Things To Do In Moscow 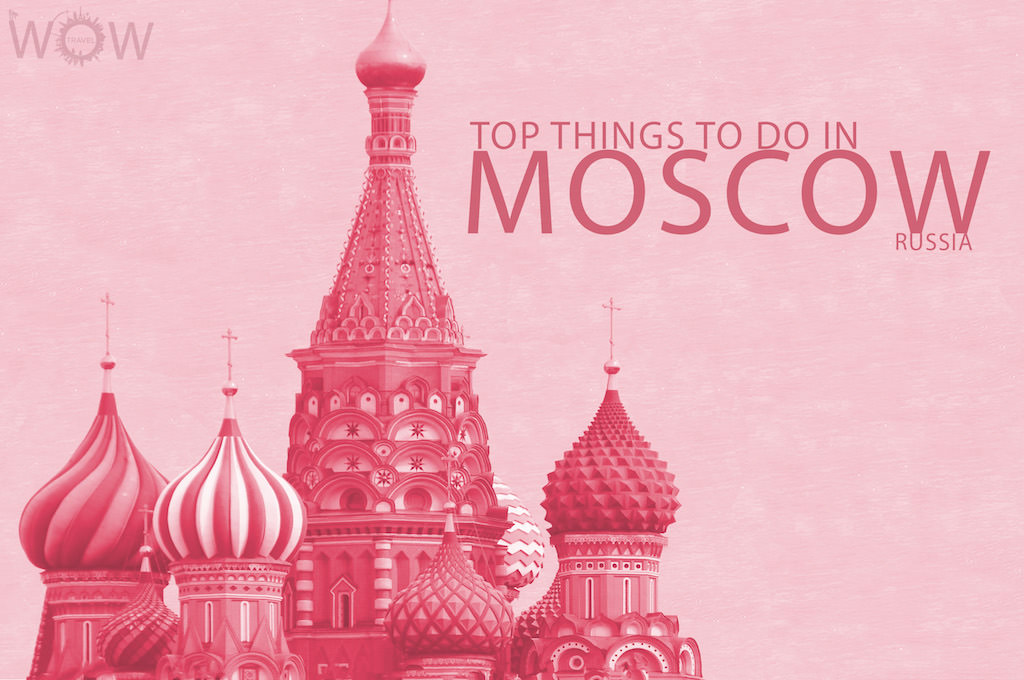 Moscow, a truly iconic global city, is one of the world’s most intriguing destinations. It is the capital of Russia, located in the far west of the country on the river Moskva. With such beautiful architecture created over several centuries, a wide range of entertainments and cultural hot spots, Moscow is one of the most breathtaking capitals in the world. We have compiled a couple of tips and recommendations with the Top 11 Things To Do In Moscow.

The St. Basil’s Cathedral, standing in the Red Square, was constructed from 1555 to 1560. It was commissioned by Ivan the Terrible in the 16th century to commemorate a military victory. The Legend tells that after it was completed, Ivan had the architect blinded in order to prevent him from building a more magnificent building for anyone else. In fact, he went on to build another cathedral in Vladimir.

Designed by Nikolai Nikitin, Ostankino Tower is one of the most impressive television towers in the world. Owned by Moscow branch of unitary enterprise Russian TV and Radio Broadcasting Network. Although it stands at 540 meters (1,770 ft) tall, it takes just 58 seconds for visitors to reach the tower’s observation deck. This observatory presents an entirely new perspective of Moscow with an amazing view.

Lenin’s Mausoleum, also known as Lenin’s Tomb, situated in Red Square, is the mausoleum that serves as the current resting place of Vladimir Lenin. The founder of the Russian Communist Party, leader of the Bolshevik Revolution and architect and first head of the Soviet state. Lenin’s embalmed body has been on display for almost 90 years, following his death in 1924. It is guarded by soldiers 24 hours a day.

Monument to the Conquerors of Space

The Monument to the Conquerors of Space was erected in Moscow in 1964 to celebrate achievements of the Soviet people in space exploration and embodiment of the cultural and historical heritage of the Soviet space program. It is 110 meters (360 ft) tall and it depicts a starting rocket that rises on its contrail.

The Bolshoi Theatre is one of the greatest and oldest ballet and opera companies in the world and a symbol of Russia for all time. It is the main temple of Russia’s culture and was opened on 20 October 1856, on Tsar Alexander II’s coronation day. It was awarded this honor due to the major contribution it made to the history of the Russian performing arts. The Bolshoi recently re-opened in October 2011 after being closed for a 6-year renovation project.

Established in 1755, Lomonosov Moscow University is a Russia’s leading academic and cultural center and the tallest educational building in the world. Including 5,000 academic staff and 4,500 researchers, over 40,000 students, including 5,000 international students from almost 100 countries. The University has its two campuses in the center of Moscow where there are 4 museums, 15 research institutes, one of the two botanical gardens, Science Park and a number of service units. The library of the University holds over 9 million volumes.

This is the deepest Museum in Moscow, what used to be a top secret bunker, located 65 meters (213 ft) beneath Moscow in the Taganskaya area. It is a unique underground facility and former emergency command post of the Ministry of Defense of the USSR. It has a spacious room with everything you need in case of nuclear war. Here were stored large amounts of food, water, fuel for stand-alone generators. Treatment systems have been installed and the resumption of the air supply and is equipped with filtered drinking water.

Cathedral of Christ the Saviour

On the northern side of the Moskwa River, near the Kremlin, there stands the world’s tallest Orthodox Christian Church, the Cathedral of Christ the Saviour. It looks centuries old, but it was just built in 2000. For the second time. After Napoleon Bonaparte had retreated from Moscow, Emperor Alexander I signed a manifest on 25 December 1812, for a grand cathedral to be built in honor of Christ the Saviour. The cathedral was to be a memorial to the sacrifices of the Russian people.

With over 85,000, The Memorial Museum of Cosmonautics, is quite an interesting place. The museum is located within the base of the soaring Monument to the Conquerors of Space in the north-east of Moscow and it is Dedicated to USSR space exploration and achievements. It contains a lot of space-related models and exhibits with variety of Soviet and Russian items which were used in history of flight; astronomy; space exploration; space technology; and space in the arts. You can see over 85,000 different items.

In the heart of Moscow, The Kremlin is associated with all major events in Russian history, and its monuments are great examples of Russian architecture. The Kremlin is a medieval fortress surrounded by huge red brick wall. Dates from the 19th century and consists of 4 churches, government building, munitions stockpiles and multitude of palaces, it is the complex that serves the official residence of the President of the Russian Federation. The Tsar Cannon, the largest cannon ever built, and the Tsar Bell, the worlds largest bell are along with the building and monuments.

The Red Square is home to some of the country’s most distinctive and important landmarks such as: Lenin’s Mausoleum, Kazan Cathedral, the brightly-domed Saint Basil’s Cathedral, GUM department store, Iberian Gate and Chapel and the State Historical Museum. The only sculptured monument on the square is a bronze statue of Kuzma Minin and Dmitry Pozharsky, who helped to clear Moscow from the Polish invaders in 1612.