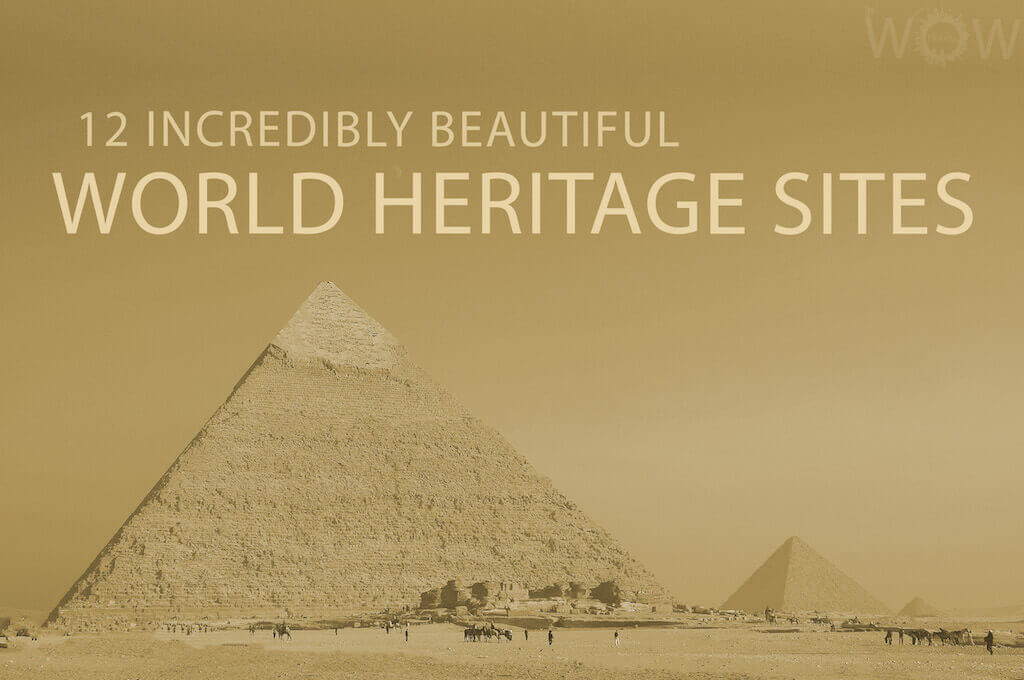 A World Heritage Site is a place (such as a building, city, complex, desert, forest, island, lake, monument, or mountain) that is listed by the United Nations Educational, Scientific and Cultural Organization (UNESCO). These globally recognized sites are very important and as such, they are typically the world’s most intriguing sites to visit for travelers. There are more than 1000 UNESCO designated sites, and everyone has their own favorites. Take a look at ours.

Carved out by the Colorado River, the Grand Canyon (nearly 1,500 m deep) is the most spectacular gorge in the world. Located in the state of Arizona, it cuts across the Grand Canyon National Park. Its horizontal strata retrace the geological history of the past 2 billion years. There are also prehistoric traces of human adaptation to a particularly harsh environment.

Inhabited since prehistoric times, this Nabataean caravan-city, situated between the Red Sea and the Dead Sea, was an important crossroads between Arabia, Egypt and Syria-Phoenicia. Petra is half-built, half-carved into the rock, and is surrounded by mountains riddled with passages and gorges. It is one of the world’s most famous archeological sites, where ancient Eastern traditions blend with Hellenistic architecture. Once in your life, you should see the beauty of one of the 11 Places That Look Like They Are From Another World.

Built in 220 B.C., under Qin Shi Huang, sections of earlier fortifications were joined together to form a united defense system against invasions from the north. Construction continued up to the Ming dynasty (1368-1644) when the Great Wall became the world’s largest military structure. Its historic and strategic importance is matched only by its architectural significance.

The capital of the Old Kingdom of Egypt has some extraordinary funerary monuments, including rock tombs, ornate mastabas, temples, and pyramids. In ancient times, the site was considered one of the Seven Wonders of the World.

Machu Picchu stands 2,430 meters (7,972 ft) above sea-level, in the middle of a tropical mountain forest, in an extraordinarily beautiful setting. It was probably the most amazing urban creation of the Inca Empire at its height; its giant walls, terraces, and ramps seem as if they have been cut naturally in the continuous rock escarpments. The natural setting, on the eastern slopes of the Andes, encompasses the upper Amazon basin with its rich diversity of flora and fauna.

Angkor is one of the most important archeological sites in South-East Asia. Stretching over some 400 km2, including forested area, Angkor Archaeological Park contains the magnificent remains of the different capitals of the Khmer Empire, from the 9th to the 15th century. They include the famous Temple of Angkor Wat and, at Angkor Thom, the Bayon Temple with its countless sculptural decorations. UNESCO has set up a wide-ranging program to safeguard this symbolic site and its surroundings.

Rapa Nui, the indigenous name of Easter Island, bears witness to a unique cultural phenomenon. A society of Polynesian origin that settled there c. A.D. 300 established a powerful, imaginative and original tradition of monumental sculpture and architecture, free from any external influence. From the 10th to the 16th century this society built shrines and erected enormous stone figures known as moai, which created an unrivaled cultural landscape that continues to fascinate people throughout the world.

The park shares with Iguazú National Park in Argentina one of the world’s largest and most impressive waterfalls, extending over some 2,700 meters (8858 ft). It is home to many rare and endangered species of flora and fauna, among them the giant otter and the giant anteater. The clouds of spray produced by the waterfall are conducive to the growth of lush vegetation.

Capital city of the first Myanma Kingdom, the site measures 13 by 8 km (8 by 5 miles) and contains more than 2,500 Buddhist monuments (temples, stupas, monasteries, etc) built from the 10th to the 14th centuries AD. Several of these monuments are still highly venerated by the population, and attract numerous pilgrims and devotees from all over the country, particularly at festival times. Other are in various states of conservation and maintenance. The large corpus of contemporary stone inscriptions has been the most reliable source for the history of the Kingdom. The mural paintings inside more than 300 temples constitute a unique corpus of paintings of that time in Southeast Asia.

The Acropolis of Athens and its monuments are universal symbols of the classical spirit and civilization and form the greatest architectural and artistic complex bequeathed by Greek Antiquity to the world. In the second half of the fifth-century bc, Athens, following the victory against the Persians and the establishment of democracy, took a leading position amongst the other city-states of the ancient world. In the age that followed, as thought and art flourished, an exceptional group of artists put into effect the ambitious plans of Athenian statesman Pericles and, under the inspired guidance of the sculptor Pheidias, transformed the rocky hill into a unique monument of thought and the arts. The most important monuments were built during that time: the Parthenon, built by Ictinus, the Erechtheon, the Propylaea, the monumental entrance to the Acropolis, designed by Mnesicles and the small temple Athena Nike.

Perhaps the most famous coral reef system on Earth, the UNESCO protected Great Barrier Reef of Australia has more than 2,900 reefs and covers an area of about 344,400 km sq.

An immense mausoleum of white marble, built in Agra between 1631 and 1648 by order of the Mughal emperor Shah Jahan in memory of his favorite wife, the Taj Mahal is the jewel of Muslim art in India and one of the universally admired masterpieces of the world’s heritage.

Note: All descriptions have been taken from UNESCO World Heritage Centre website.