11 Places That Look Like They Are From Another World 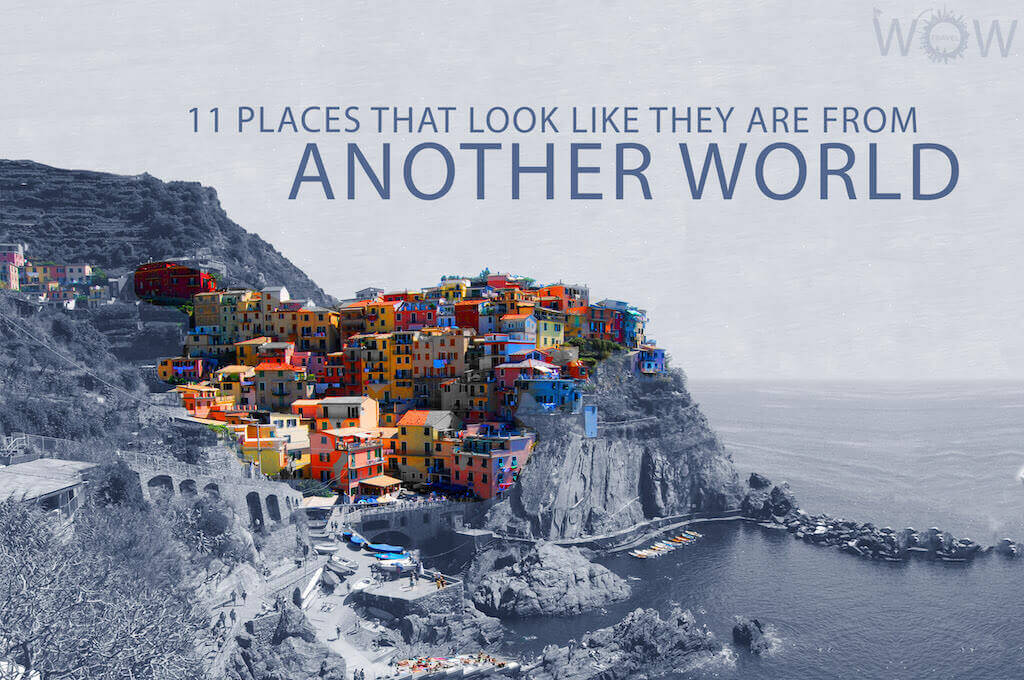 These surreal and out-of-this-world photos will make you feel like you are on another planet. Luckily, they are just a plane ride away. Enjoy our list of the 11 Places That Look Like From Another World.

Paro Taktsang is Bhutan’s most iconic landmark and religious site. The name Taktsang translates to “The Tiger’s Nest”. This temple is one of the holiest sites in the kingdom and clings impossibly to a sheer cliff face 900 meters (2,950 ft) above the Paro Valley. It was first built in 1692 as a cave where Guru Rinpoche meditated in the 7th century A.D. Legend states that Guru Rimpoche flew to the site on the back of a tigress and meditated in the cave for 3 years, 3 months, 3 days and 3 hours in order to subdue evil demons residing within it. The cave has been considered a sacred site ever since and many famous saints have traveled to meditate in it. Paro Taktsang is located approximately 10 km (6.2 miles) north of Paro town at an altitude of 3,120 meters. In order to arrive at the temple, visitors must trek for around 2-3 hours through beautiful, shady pine forests. No trip to Bhutan would be complete without a visit to this remarkable heritage site.

Manarola is a small fishing town in northern Italy. It is one of five tiny towns that are all connected by a walking path, in a section of the Italian Riviera known as Cinque Terre. The village of Manarola is surrounded by vines and is situated along a stream.

Petra, the capital of the Nabataean Arabs, is a UNESCO World Heritage Site and one of the most famous archeological sites in the world. This vast city carved from the red-tinged rock began to prosper as the capital of the Nabataean Empire from the 1st century BC, which grew rich through trade in frankincense, myrrh, and spices. Petra was later annexed to the Roman Empire and continued to thrive until a large earthquake destroyed much of the city in the 4th century AD. The earthquake combined with changes in trade routes eventually led to the downfall of the city which was ultimately abandoned.

Avenue of the Baobabs, Madagascar

The Avenue of the Baobabs is a group of baobab trees lining the dirt road between Morondava and Belon’i Tsiribihina in the Menabe region in western Madagascar. The experience of using this road is very impressive. It’s a row of about 20 – 25 imposing Baobab trees along some 260 meter (853 ft) long stretch of the road and in the nearby pastures between Morondava and Belo Tsiribihina. Its striking landscape draws travelers from around the world, making it one of the most visited locations in the region. It has been a center of local conservation efforts and was granted temporary protected status in July 2007 by the Ministry of Environment, Water and Forests, the first step toward making it Madagascar’s first natural monument. Source: DangerousRoads

The spectacular Giant Crystal Cave is connected to the Naica Mine, located in Chihuahua, Mexico. 300 meters (984 ft) bellow the surface. Its main chamber contains the largest selenite crystals ever found, some of them reaching 11 meters (36 ft) in length, 4 meters (13 ft) in diameter and about 55 tons in weight. The crystals are said to be 500,000 years old and were formed from the underground magma (situated below the cave) which maintained the water at a stable temperature of 50°C (122°F), saturating it with minerals, including gypsum. This process allowed the selenite crystals to grow to the unbelievable sizes that we see today.
You may also like: 10 Beautiful Caves You Must See.

Colmar is a commune in north-eastern France. The town is situated along the Alsatian Wine Route and considers itself to be the “capital of Alsatian wine”. Essentially traffic-free city center, Colmar is a fantasy of steep pitched roofs, pastel stucco, and aged timbers. This charming town was an important marketplace as well as a center of art and learning in the 13th century. Can’t get enough of the view? Stay at one of the 11 Best Hotels in Colmar.

New Zealand glowworms live all over New Zealand; they are very common and found in forest settings. The Waitomo Glowworm Caves, located just outside the main Waitomo township on the North Island of New Zealand, is a famous attraction because of a considerable population of glowworms that live in the caves. Glowworms are small, bioluminescent creatures that produce a blue-green light and are found exclusively in New Zealand. The Waitomo Glowworm Caves were first explored in 1887 by local Maori Chief Tane Tinorau accompanied by an English surveyor Fred Mace.

Your eyes are not deceiving you. This layer cake of amazing colors is a real landscape located at Zhangye Danxia Landform Geological Park in Gansu Province, a remote region in northern central China. (‘Danxia’ is the name for a type of rock form, ‘Zhangye’ being this particular location). Across the Danxia landscape zone, a kaleidoscope of numerous red rocky outcrops resembles weird and wonderful shapes like castles, cones, towers; as well as humans, creatures, birds, and beasts. The unusual colors of the rocks are the result of red sandstone and mineral deposits being laid down over 24 million years.

The St. Basil’s Cathedral, standing in the Red Square, was constructed from 1555 to 1560. It was commissioned by Ivan the Terrible in the 16th century to commemorate a military victory. The Legend tells that after it was completed, Ivan had the architect blinded in order to prevent him from building a more magnificent building for anyone else. In fact, he went on to build another cathedral in Vladimir.

You may also like: 10 Most Extraordinary Churches Of The World.

The world’s smallest capital may be tiny in size but it houses beautiful surprises for you. It may not be the most cosmopolitan party city most people hope for but its narrow streets, colorful houses, graffiti and a strong communal feel make of this charming places a perfect stop to relax, breathe in a bit of the abundant calm and serenity of the Maldives.

The Neuschwanstein Castle really looks like a fairytale castle, it is one of the most visited castles in Germany and one of the most popular tourist destination in Europe. The castle is located in Bavaria, near the town of Fussen. It was built by King Ludwig II of Bavaria, also known as the “Fairytale King”. King Ludwig was a great admirer and supporter of Richard Wagner, the world-renowned composer. Neuschwanstein Castle was built in his honor and many rooms in the castle’s interior were inspired by Wagner’s characters.