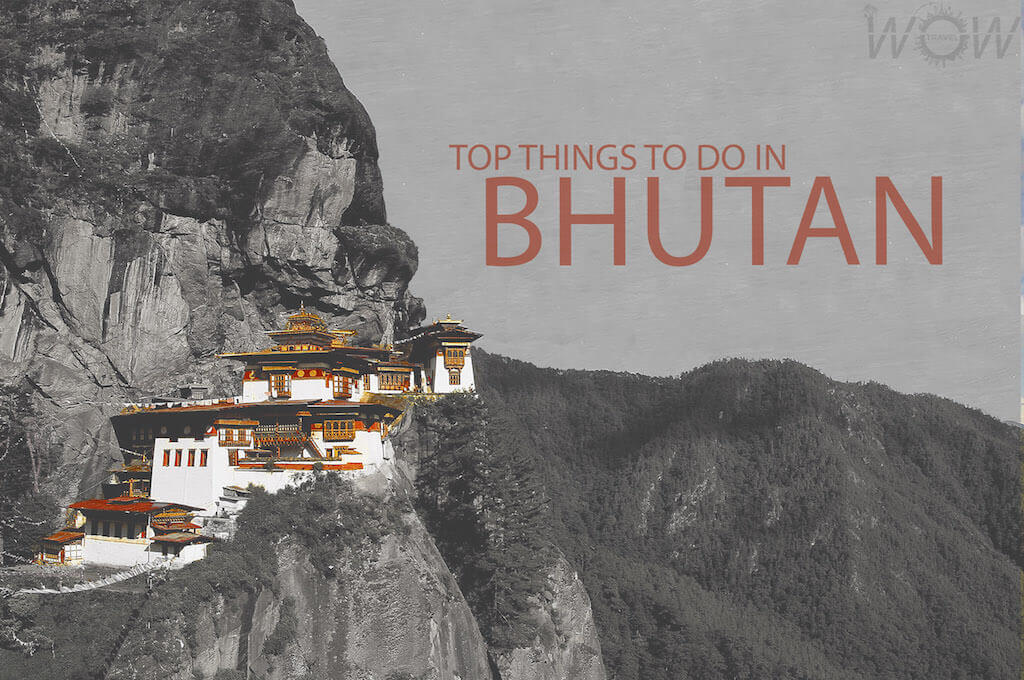 Tourism in Bhutan was introduced in 1974 during the coronation of His Majesty the 4th King. Since then Bhutan has pursued a cautious policy in tourism guided by principles of sustainability that is today the envy of many destinations in the world. Bhutan’s strategy of “low volume, high quality” tourism has made it a highly regarded destination for discerning travelers. It costs an official US$250 per day per person to sample the charms of this isolated Himalayan kingdom, an amount that includes land transport, accommodations, food and guide service. While it’s not quite an arm and a leg, the cost does seem restrictive for some. It’s the government’s way of keeping the country from being overrun by mass tourism while at the same time ensuring its preferred visitors get the most value out of their trips. WOW Travel put together for you a list of the Top 6 Things To Do In Bhutan.

Located on the way to Punakha from Thimphu. The pass is a popular location among tourists as it offers a stunning 360-degree panoramic view of Himalayan mountain range. The view is especially scenic on clear, winter days with snowcapped mountains forming a majestic backdrop to the tranquility of the 108 chortens gracing the mountain pass.

Popularly known as the Punakha Dzong, Punthang Dechen Phodrang (The Palace of Great Bliss) was built in 1637 by the Zhabdrung. The gigantic Dzong was damaged 6 times by fire, once by flood and once by an earthquake. On 17 December 1907, the first king of Bhutan, Ugyen Wangchuck, was crowned here. The Machen Lhakhang, a temple inside the Dzong enshrines the mummified body of the Zhabdrung who passed away in retreat here in 1651. Dzongchung (or the little Dzong), built in 1328 by saint Ngagi Rinchen can still be seen opposite the main Dzong. The spectacular Kuenrey (assembly hall) in Punakha Dzong is open to the tourists.

Paro Taktsang is Bhutan’s most iconic landmark and religious site. The name Taktsang translates to “The Tiger’s Nest”. This temple is one of the holiest sites in the kingdom and clings impossibly to a sheer cliff face 900 meters (2,950 ft) above the Paro Valley. It was first built in 1692 at a cave where Guru Rinpoche meditated in the 7th century A.D. Legend states that Guru Rimpoche flew to the site on the back of a tigress and meditated in the cave for 3 years, 3 months, 3 days and 3 hours in order to subdue evil demons residing within it. The cave has been considered a sacred site ever since and many famous saints have travelled to meditate in it. Taktsang Lhakhang is located approximately 10 km (6.2 miles) north of Paro town at an altitude of 3,120 meters. In order to arrive at the temple, visitors must trek for around 2-3 hours through beautiful, shady pine forests. No trip to Bhutan would be complete without a visit to this remarkable heritage site.

Chomolhari is the second highest peak in Bhutan lying on the western border with Tibet. Due to both technical difficulty, strong winds, and access issues, Chomolhari has seen only six successful ascents to date. As of 1996, no technical climbing is permitted in Bhutan. On the Tibetan side, climbers have reported difficulty in obtaining permits due to a large Chinese military presence. One of the most popular treks advertised for Bhutan is the “Chomolhari Base Camp Trek”. Thousands of trekkers photograph spectacular views of Chomolhari from the camping destination Jangothang or “Land of Ruins” in Bhutan each year. Chomolhari, according to Buddhist beliefs, is the seat or the embodiment of Tseringhma. The mountain is sacred to Tibetan Buddhists who make an annual pilgrimage from Phari Dzong to the holy lake Chomo Lharang just north of the mountain.

A small town that lies on the banks of the Paro Chhu, just a short distance northwest of the imposing Paro Dzong. The main street, only built in 1985, is lined with colorfully painted wooden shop fronts and restaurants though these appear under threat as the town grows and multi-storey concrete buildings continue to propagate.

The capital and largest city of Bhutan. The city became the capital of Bhutan in 1961. As of 2005 it had a population of 79,185, with 98,676 people living in the entire Thimphu district. Thimphu offers the best opportunity to briefly break away from the tour itinerary. In addition to its traditional Buddhist sights and attractions, it offers cafes, bars, nightclubs and restaurants.

Bhutan has declared 2015 as a Visit Bhutan Year to commemorate the 60th birth anniversary of His beloved 4th King Majesty Jigme Singye Wangchuck. A figure loved and revered by all Bhutanese, it is an occasion where the country come together to celebrate 60 years of a life spent in the service of the nation and its people. The tourism fraternity invites the world to join the Bhutanese in celebrating 60 years of Gross National Happiness.