10 Beautiful Caves You Must See 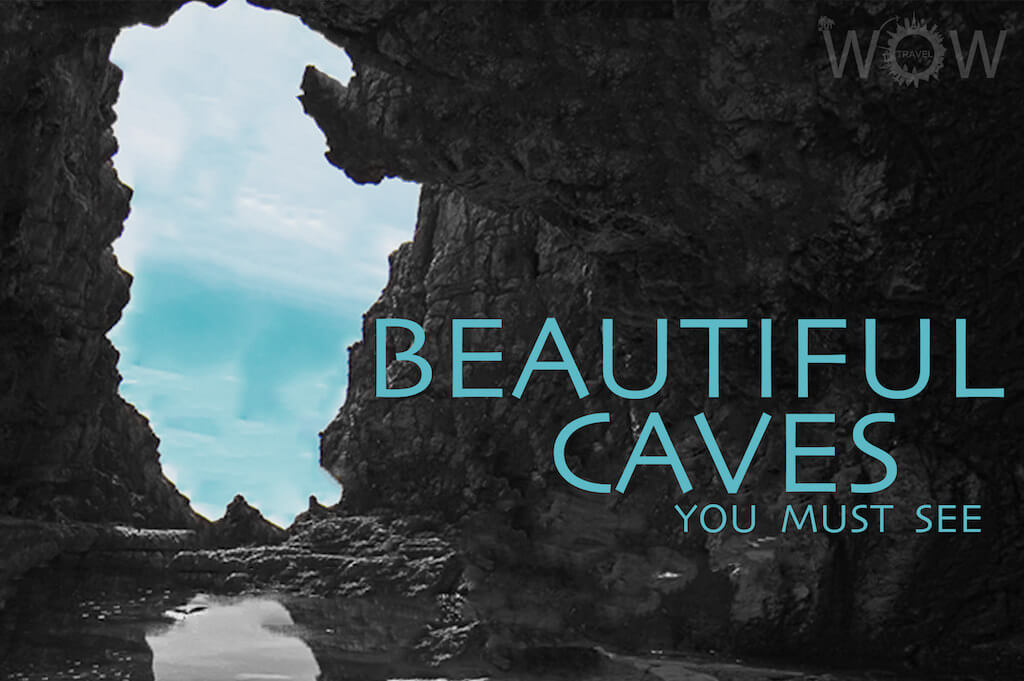 The mystery is what prompted men to leave caves, to come out of the womb of nature. However, nature is wise and sometimes keeps its most beautiful treasures within these underground chambers called caves. Always remember that the cave you fear to enter may hold the treasure you seek. WOW Travel invites you to discover The 10 Beautiful Caves You Must See.

New Zealand glowworms live all over New Zealand; they’re very common and found in forest settings, The Waitomo Glowworm Caves, located just outside the main Waitomo township on the North Island of New Zealand, is a famous attraction because of a considerable population of glowworms that live in the caves. Glowworms are small, bioluminescent creatures that produce a blue-green light and are found exclusively in New Zealand. The Waitomo Glowworm Caves were first explored in 1887 by local Maori Chief Tane Tinorau accompanied by an English surveyor Fred Mace.

The Marble Caves were formed by waves washing against the calcium carbonate walls of the Patagonian Andes for over 6000 years. Reflecting an electric sky blue from the waters of Lake Azure, guests can embark on a thirty minute guided tour of these marvelous caves carved into solid marble along the Chile Argentina border.

The Ice Cave Near The Mutnovsky Volcano, Russia

The half-mile long cave was formed by a stream that flows through glacial fields at the bottom of the volcano. All photos were taken by Denis Budko. Bud’ko wrote that the passage is usually too small to enter, but light snowfall and an unusually hot summer created these massive caverns with a nearly transparent roof, reminiscent of a stained-glass cathedral. Known for an abundance of precipitation the area is often covered in several meters of snow and ice that cover mountain streams like this creating vast caves that look like something out of a science fiction movie.

Lod Cave is a large spectacular natural limestone cave system, its main feature being the stream which runs through the heart of the cave. Here you have a choice of exploring some of the dark caverns by lamplight and/or taking a bamboo raft into the cave. Bats are in abundance here as well as many swifts which make their nest in the mouths of the caves, both can be seen exiting the caves at dusk in large numbers. There is no artificial lighting in the cave so any exploration should be done with the services of a guide with lamps or on one of the rafts. A number of prehistoric wood coffins have been found in this cave, the remnants of the coffins can still be seen.

The spectacular Giant Crystal Cave is connected to the Naica Mine, located in Chihuahua, Mexico. 300 meters below the surface. Its main chamber contains the largest selenite crystals ever found, some of them reaching 11 meters in length, 4 meters in diameter and about 55 tons in weight. The crystals are said to be 500,000 years old and were formed from the underground magma (situated below the cave) which maintained the water at a stable temperature of 50°C, saturating it with minerals, including gypsum. This process allowed the selenite crystals to grow to the unbelievable sizes that we see today.

This natural cave is 25 meters wide and 60 meters long, with a tiny entrance less than a meter high. To enter, visitors lay back in wooden rowboats and glide through the low cave mouth. Once inside, the boats bob in the dark, suspended on the surface of the water so blue that it seems dream-like. Floating in the Grotta Azzurra is an experience that should be on any traveler’s bucket list.

Inside the Khao Sam Roi Yot National Park is the Phraya Nakhon: an incredible cave with an interesting history behind it. Sunlight filters through the top of the structure’s collapsed ceiling, illuminating the Kuha Karuhas pavilion that was originally built in 1890 for King Chulalongkorn. Since its construction, other local kings have visited the cave and left their signatures on its walls. This is one cave that is majestic in every sense of the word. (Source: renown-travel.com)

Located on the island of Staffa, Scotland, Fingal’s Cave, also known as “Uamh-Binn” in Gaelic (meaning “cave of melody”), is well-known for its arching, cathedral-like geological features and emanating eerie sounds. The cave, along with the entire island of Staffa, is composed entirely of hexagonal basalt columns (similar to Northern Ireland’s Giant’s Causeway), which produces the naturally arched ceiling. The easiest way to see this awe-inspiring cave for yourself is to take a sightseeing cruise from the town of Mull. The cruises land close to the cave, and the hexagonal basalt columns serve as perfect stepping stones to walk along the shore and enter the cave.

There is not much information about this special cave in Kyaut Se, but we know that there is a special Buddhist temple inside and it’s very active.

The sprawling Navajo Nation has no shortage of magical places, but the most photogenic might be Upper and Lower Antelope Canyon, located just outside Page, Arizona. They are a testament to the power of water and time, as over the years, flash flooding has created deep, gorgeous passageways—called slot canyons—that you can walk through.

If you look at Paleolithic cave paintings, you see how people were depicted inside nature, not outside it. They described amazing times, people living together, eating, working, fishing, it was a kind of dream time. Maybe it is a reason why we should keep looking for hidden messages inside these beautiful natural treasure boxes called caves.