Top 8 Things To Do In Easter Island 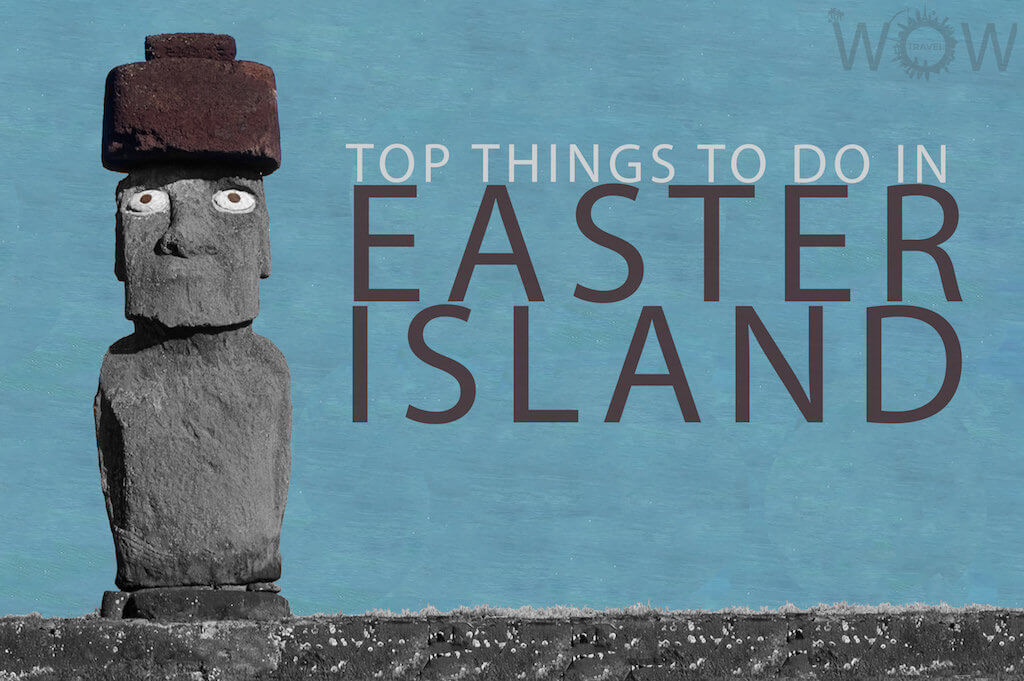 Easter Island, also known as Rapa Nui, is a tiny volcanic island halfway between Oceania and South America, at the southeasternmost point of the Polynesian triangle. Easter Island is mostly famous for the Moai, massive human figures carved from stone by the Rapa Nui people between 1250 and 1500 AD. The 887 giant Moai statues on Easter Island have turned this isolated inhabited land on the planet into one of the most well-known and most mysterious touristic spots. Easter Island was built around 3 main volcanoes (Poike, Rano Kau and Terevaka) and the entire island is protected within the World Heritage site of the Rapa Nui National Park. The volcanoes, beaches, the culture, and mainly the mysterious Moai are one of a kind and despite the smallness of the island, there are various attractions. Check out our Top 8 Things To Do In Easter Island.

What is Moai? Moai are the easter island heads. They are monolithic human figures with a masculine shape, sculpted in volcanic hardened rough ashes.

So what is Ahu? An ahu is the flat base of the stone where the moai are supported.

Ahu Tongaiki is the biggest and the most photographed Ahu’s in Eastern Island. It contains 15 moai that have been recently restored after the Ahu was destroyed in the 1960s by a Tsunami. Its isolated location, the nearby Poike volcano and the waves of the Pacific Ocean crashing behind it, give an air of majesty and mystery unmatched. The Moai face inland as they were guardians of the scattered groups that dwelt on Rapa Nui.

Rano Kau is a 324 meter (1,063 ft) tall extinct volcano that forms the southwestern headland of Easter Island. It is the biggest extinct volcanic crater and the most beautiful one on the island. Rano Kau was formed of basaltic lava flows in the Pleistocene with its youngest rocks dated at between 150,000 and 210,000 years ago. It has a crater lake which is one of the island’s only three natural bodies of freshwater. The crater is over 1.5 km.

The ceremonial village of Orongo, in the south of the park, is considered to be among the most spectacular archaeological sites in the world. It is perched on a narrow ridge, with the crater of the Rano Kau volcano on one side and cliffs that fall 300 meters to the sea on the other. Orongo contains dozens of petroglyphs and stone houses dating from the Huri-Moai period of Easter Island’s history (c. 1680–1867). The self-contained, dry-laid houses featuring sod roofs were built into the topography of the site. The ceremonial center of Mata Ngarau in Orongo, the center of the Tangata Manu (Birdman) cult that succeeded the moai culture, was the site for the annual games that represented the transfer of power between competing clans. By the end of the nineteenth century, most of the Rapa Nui culture had perished or had converted to Christianity; the Tangata Manu cult collapsed and Orongo was abandoned. Source: wmf.org

Standing at 511 meters (1,676 ft) above sea level, Terevaka is the largest, tallest and youngest of three main extinct volcanoes that form Easter Island. Its summit offers a wonderful 360 view of the island.

Rano Raraku is a volcanic crater formed of consolidated volcanic ash, or tuff, and located on the lower slopes of Terevaka. Rano Raraku is known as he “Moai factory” because that is where the most figures were excavated. The stone-faced giants lie in various states of production. Some are half carved, many are broken, and many seem to have been abandoned in mid-transport. Most remarkably, at the base of the quarry, moai stand half buried in the slope—up to their chins and noses, from years of erosion. It looks like a graveyard of stone giants. It is as if the production of moai was abruptly abandoned, leaving us a frozen snapshot in time. This quarry and the nearby transport road is the staging area on which many speculators base their theories on how the moai were transported.

Situated near the town of Hanga Roa, the Tahai Ceremonial Complex is an archaeological site, home to three separate moai platforms. On the north side is Ahu Ko Te Riku, a platform with this single moai, which not only sports a topknot, but eyes believed similar to those used to decorate other moai. On the southern edge is the larger Ahu Vai Uri, with five moai of assorted shapes and sizes. In the middle is the most famous platform with a single moai called Ahu Tahai, thought to be among the earliest ahu structures on the island, dating back to AD 690. Ahu Tahai is a must-see during one of Easter Island’s brilliant sunsets.

The only town at Easter Island (and its capital) is called Hanga Roa. The main street is called Atamu Tekena, along which you’ll find many restaurants and shops. The crossing street Te Pito o te Henua with the church at the top is also quite busy, but the heart of the center is the market. There is also the cemetery, an interesting and colorful spot overlooking the water, where most of the island’s deceased are buried.

During the first two weeks of February each year, the entire island comes together for a unique celebration of their culture, involving music, dance and traditional sports. Tapati Rapa Nui is a festival that is at once a test of masculine strength and feminine grace, a celebration of local culture and a welcoming of visitors. Unlike many island festivals, Tapati Rapa Nui has been a festival for locals, by locals, rather than a tourist attraction. In 1969, just a few years after Easter Island gained some autonomy from Chile, Semana de Rapa Nui was born as a simple summer festival that featured singing, dancing and a small parade. Over the years it has evolved, including a name change, but Tapati Rapa Nui has always been about celebrating Polynesian pride. While tourists are welcome, and tend to pack the island this time of year, this is not a commercial luau or something you’d find at a hotel in Waikiki. Expect true authenticity in these festivities, and a deep appreciation and respect for the culture by the Rapa Nui people and all who attend. Source: fest300