Top 10 Things To Do In Thessaloniki 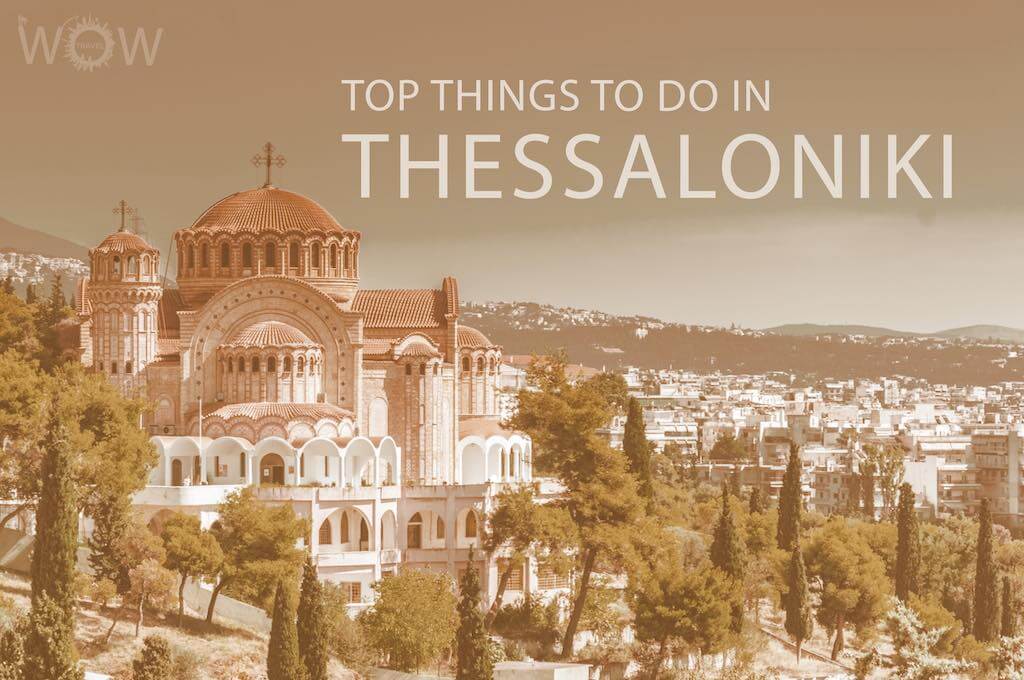 It’s no surprise that the top 10 things to do in Thessaloniki encompass history, culture, and nature. Dating from 315 BC, this capital city of Central Macedonia in Greece is teeming with ancient buildings. Old and new traditions are alive and well here, and the arts and culture scene is ever vibrant. It’s the second-largest city in the country after Athens (about a 5-hour drive), and it’s forever growing and evolving. You can fill your days exploring archaeological sites, shopping in fashionable boutiques, or going on relaxing walks in the waterfront parks. And when the sun sets, the nightlife of Thessaloniki beckons with its ouzeries and bars.

Want to save time and money? A hop-on hop-off sightseeing bus tour can help! The ability to get on and off as many times as you like at 8 different stops to explore the city’s treasures is definitely worth the tour’s small fee.

Standing 34 meters high over the city, the White Tower is an iconic landmark. It may look benign now, but it’s a throwback to a dark part of Thessaloniki’s history. When the Ottomans ruled the city, the tower functioned as a jail, where tortures and massacres took place. Legend has it that the structure kept its monicker “Tower of Blood” until a prisoner whitewashed in exchange for his freedom. Today, the White Tower houses a museum with exhibits showing aspects of daily life in Thessaloniki over the centuries. It’s among the highlights of a classic sightseeing tour, one where you can visit the city’s best attractions in the comfort of a car.

Exploring historic landmarks is among the top 10 things to do in Thessaloniki, and this distinctive Roman structure is a must-see. Emperor Galerius commissioned its construction in 303 AD to celebrate his victory over the Sassanid Persians. War-like scenes depicted in carvings in the marble panels illustrate the fall of the Persian capital Ctesiphon. The monument used to have four main and supporting pillars, a dome, and eight gates and arches. However, only a single supporting arch and two central arches have withstood the passage of time. Not a mile away is the outstanding Daios Luxury Living 5-star hotel, where you can enjoy sweeping sea views from discreetly elegant rooms and suites. It’s also one of the best hotels in Thessaloniki.

A few years after building the Arch of Galerius, the very same emperor constructed this massive domed structure as part of a palace complex. Historians speculate that Galerius might have planned to use it as a mausoleum. What’s certain is that the Rotunda served religious functions throughout the ages. First, it was a Christian church (Agios Georgios) established by Emperor Theodosius I in the late 4th century. After more than a millennium, it became the Mosque of Suleyman Hortaji Effendi after Thessaloniki’s fall to the Ottomans. In 1912, Greek Orthodox officials reconsecrated it as a church. Today, it serves as a venue for both secular and religious events.

Fans of religious architecture will find much to admire here. This impressive Byzantine church goes back more than 1,000 years. In fact, the earliest written reference about it dates back to 795 AD. However, another temple stood on its site until the great earthquake of 620 AD. Most of the wall paintings date from the 11th century, though there are murals of the iconoclastic wars from the 8th century. The crusaders used the Hagia Sophia as a cathedral after the Fourth Crusade in the 13th century. It functioned as a mosque after the Ottomans captured Thessaloniki in 1430. A fire in 1917 damaged the building, and it underwent gradual restoration over the decades. Today, Hagia Sophia is a UNESCO World Heritage site and exploring it is one of the 10 best things to do in Thessaloniki.

Designed by the French architect and urban planner Ernest Hébrard, Aristotle Square forms a big part of Thessaloniki’s heart and soul. It’s the city’s main city square and one of the most impressive in the whole country. A stroll along the waterfront square, which sits along Nikis Avenue, affords scenic views of Thermaikos Gulf. Beautiful mansions, bustling bars, cafes, and restaurants, and other buildings all flank the square. It’s also more than just a place for leisurely walks. The square has served as the location for many political gatherings as well as festivals and other cultural celebrations.

Constructed in 1997, this church is in no way as ancient as many of the city’s other religious landmarks. Nevertheless, it’s one of the best things to see and do in Thessaloniki. Perched atop a hill, it’s an unmistakable sight in the Aghios Pavlos district. The church commemorates Saint Paul the Apostle, who came to Thessaloniki a couple of times in the 1st century AD. A flattened dome and the distinctive arch adorning the central entrance are just two notable architectural details. Inside the shrine, a silver chest trimmed with enamel holds sacred relics.

This abandoned fortress, located inside the Acropolis of Thessaloniki, traces its roots to the Byzantine era—as far back as 330 AD. However, the Ottomans rebuilt it in the 15th century when they conquered the city. Its conversion into a prison took place in the 19th century. From the 1930s to the 1960s, the fortress developed a dark reputation as a place where inmates were tortured and executed. Restoration started when the prison closed in 1989, and today it stands as one of the memorable things to see in Thessaloniki.

Savoring delicious Greek food is surely one of the top 10 things to do in Thessaloniki, and this is where you can do just that. Also called the Vlali Market, it’s one of the places for authentic Thessaloniki shopping. Kapani Market offers a tasty slice of Thessaloniki’s culinary history, having been in existence since the time of the Ottomans in the city. Conveniently located in the city center, this outdoor market is where many of the locals go to buy fresh meat, fish, fruits, and vegetables. Looking for souvenirs? You’ll find a good variety in Kapani. For another look at authentic Greek culture, join a private traditional-villages tour. From tasty souvlaki in Agios Prodromos to 14th-century Byzantine architecture in Galatista, it’s an experience that’s worth every penny.

This stainless-steel sculpture ranks among the top things to see in Thessaloniki. The late Greek sculptor George Zongolopoulos created it when he was 92 years old, and another version exists in Brussels. In 1997, Thessaloniki claimed the title “European Capital of Culture.” Fittingly, it was also during this year that the sculpture took its place on the city’s waterfront. The umbrellas have traveled to various parts of the world, an ambassador of sorts for Thessaloniki’s art and culture scene.

Visiting this wildlife haven is one of the 10 best things to do in Thessaloniki. Located in a suburban forest in the Xilia Dendra area, it’s among the city’s top family-friendly attractions. Various animals live within the zoo’s 33,000 sq m expanse. These include wild sheep, peacocks, bears, goats, and boars. The forest setting provides a conducive environment for children to observe and learn about the animals in the zoo. Also within the zoo’s premises are a natural history museum and the House of Reptiles.