Top 10 Things To Do In Amsterdam 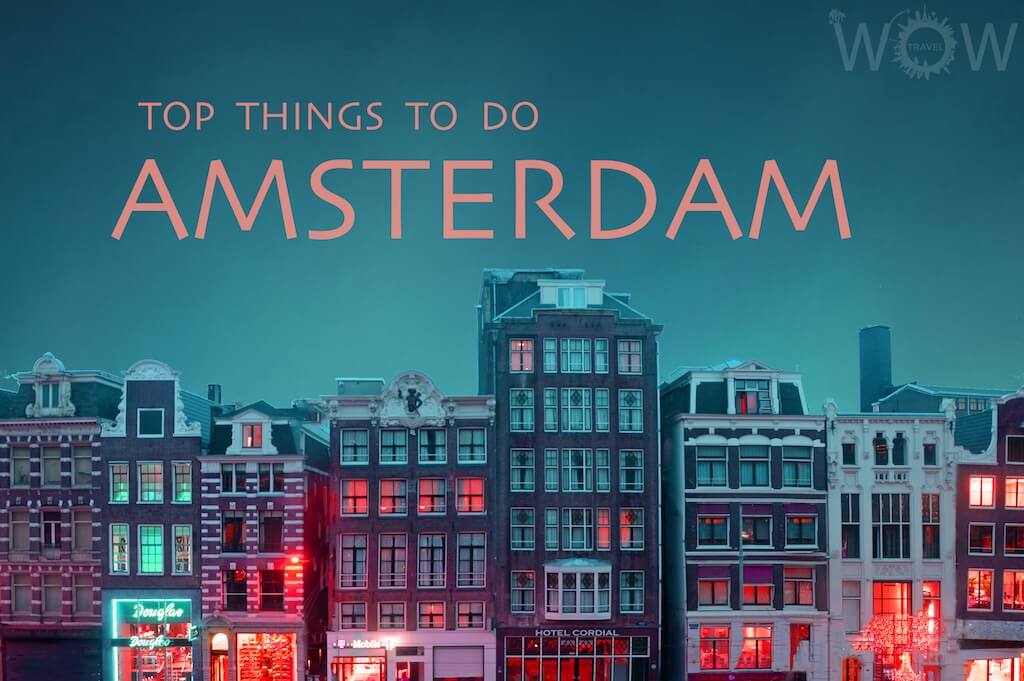 Amsterdam is the capital of the Netherlands an it is one of the greatest small cities in the world. Known as the “Venice of the North” for its 165 canals and 1,281 bridges. Amsterdam’s well-preserved and appealing 17th-century architecture provides a quaint if incongruous backdrop for a city famous for its modern, progressive, charming and cosmopolitan attitudes. It offers easy sight-seeing adventures by foot, bike and boat, from the city’s fine art museums to its colorful flower markets, from cannabis-selling “coffeeshops” to the red light district, take a look at our picks for the Top 10 Things To Do In Amsterdam.

“Some tourists think Amsterdam is a city of sin, but in truth it is a city of freedom. And in freedom, most people find sin.” – John Green

Located in the historical center of Amsterdam, Dam Square was once the central marketplace of Amsterdam where literally everything under the moon was sold. Nowadays Dam Square is Amsterdam’s beating heart and a very peaceful square which is home to scores of pigeons and street performers, food stalls, restaurants and shops galores, including the trendy Bijenkorf, Magna Plaza, Bonneterie, Amsterdam Diamond Center, the Royal Palace, the Nieuwe Kerk (New Church) and the National Monument.

For the perfect picnic, head to the Vondelpark. The largest green space in Amsterdam, the park is named after its best-known poet Joost van den Vondel (1587-1679), whose controversial play Lucifer caused the religious powers of the time to crack down on ‘notorious living’. Yet it continues to thrive in the summertime when people gather to smoke, drink and feast here. The park is also something of a cultural hub, with a number of sculptures including one by Picasso. From June to September, music, dance and kids’ activities take place at the Vondelpark Openluchttheater.

The Anne Frank House, located at the Prinsengracht in Amsterdam, is a museum dedicated to the Jewish girl Anne Frank who hid here with her family and other people from Nazi persecution during the German occupation of the Netherlands. Anne wrote a wartime diary about her life in the refuge; the occupants were later betrayed to the authorities and deported to concentration camps, where all died (except Otto Frank, her father). The diary could be retrieved nonetheless and give an emotional and moving impression about Jewish life during the Nazi terror reign. The museum was reopened in 1999 and is one of the most-visited museums of Amsterdam (an average on > 1Mio. visitors per year).

The Rijksmuseum is the largest and the most attractive museum in the Netherlands, with more than one million visitors each year. Opened in the spring of 2013 after a decade of renovation, the museum has a wonderful collection of the 17th Century Dutch Golden Age masterpieces. Famous “The Night Watch” by Rembrandt as well as other celebrated paintings like Vermeer’s “The Milkmaid” and “Woman reading a letter”, “The Windmill at Wijk bij Duurstede” by van Ruisdael, “The Burgomaster of Delft and his Daughter” by Jan Steen and many more. These marvelous paintings reflect the history and character of the Dutch. Unique sculptures and various antiquities as traditional furniture, Delftware, silver, ship models and doll houses complete the show.

The Begijnhof offers an alternative island of tranquillity, A small square of historic buildings with a quiet garden. Dating back to the 14th century, the tranquil courtyard of the Begijnhof is surrounded by the bustle of Kalverstraat, Spui and the Nieuwezijds Voorburgwal. The original facades were replaced in the 17th and 18th century, but 18 of the houses still have gothic wooden frames—one of which is still visible. The Begijnhofkapel, with its paintings of the Miracle of Amsterdam, and the English Church remind visitors of the courtyard’s religious foundations.

Located on the northwestern side of the Museum Square, or Museumplein, the Van Gogh Museum is home to the world’s largest collection of the artist’s paintings and letters. Housed in a four-story building designed by Gerrit Rietveld in the 1970s, the museum is one of the most visited tourist attractions in Amsterdam. Two hundred paintings from the Dutch Post-Impressionist occupy the second story of the museum. Displayed chronologically, the artwork offers viewers an intimate look at Van Gogh’s evolving style. The third story contains information about the artist’s troubled life and about the efforts taken to restore his paintings. Works by Van Gogh’s contemporaries, including artists like Millet, Gaugin and Daubigny are exhibited on the top floor.

De Wallen is Amsterdam’s infamous red-light district, the city’s designated area for legalized prostitution. The neighborhood covers several canals and side streets to the south of Central Station. More than one hundred one-room apartments are rented by sex workers who entice onlookers from behind windows illuminated with red lights. A strong police presence keeps the neighborhood safe. Although taking pictures is not allowed, visitors are welcome. As the oldest section in Amsterdam, the district is also home to several historic buildings, including the city’s oldest church, the Gothic-style Oude Kerk.

See millions of flowers at Amsterdam’s floating flower market. A perfect place to buy souvenirs and gifts, the flower market has millions of cut and potted flowers, as well as bulbs, pots, and other gardening essentials. The market is a little touristy, but it is still really cool, and locals do go there as well. See why Holland is famous for flowers!.

The first image one conjures up when thinking of Amsterdam is its tranquil canals. Three rings of canals, lined by elaborately decorated merchants’ residences and warehouses built in the 17th century, the Dutch “Golden Age”, give the city its iconic and easygoing image. In fact, 90 islands were created when the canals were built, and they’re all connected by hundreds of charming bridges. Can’t get enough of the view? Stay at one of the 11 Best Hotels in Amsterdam around this area.

De Pijp is a former working class neighborhood which has seen its share of gentrification over the years. Now it’s a hipstery ‘hood with cute cafés, underground bars and a fair amount of street art. Also cool in this area is the Albert Cuypmarkt— a daily food market with cool shops and great street food. Make sure to visit the Albert Cuypmarkt (open every day except Sunday from 9-6pm) to find quirky clothing, street food and fresh fruit & veggies.