15 Most Beautiful Squares In Europe 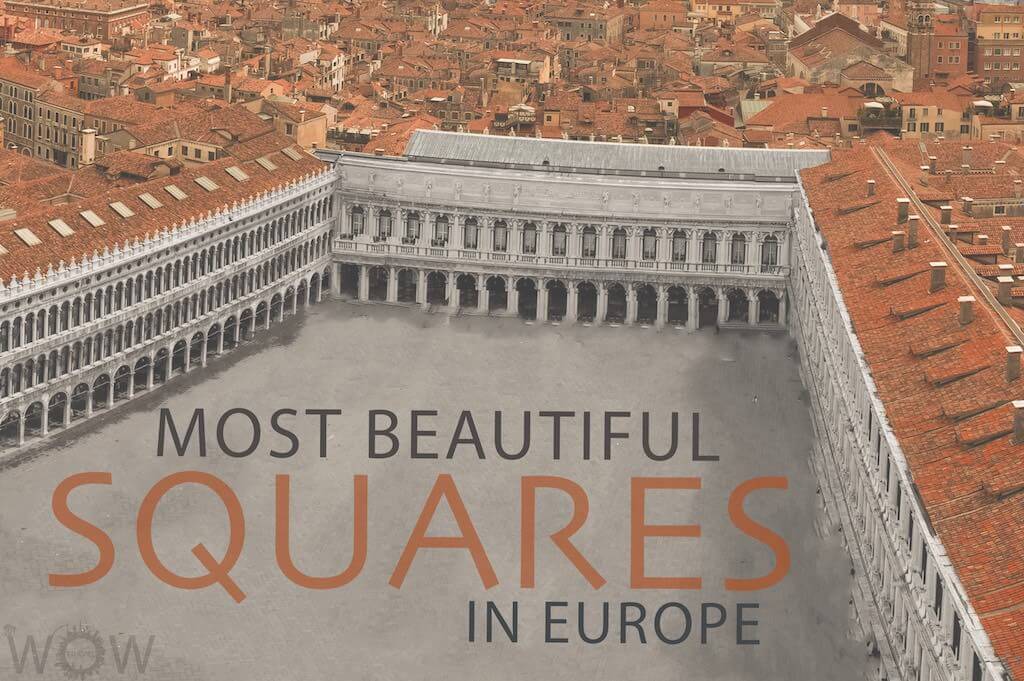 Central plazas and squares play a crucial role in successful urban areas. They are serving an important purpose as a social and commercial meeting place, a place where impromptu gatherings, people watching and even, political discourse all naturally intersect. Europe is famous for its rich history, its architecture, as well as its beautiful squares and almost every European city, has a famous square. Below, we have taken a look at some of the Most Beautiful Squares In Europe.

Designed and built by Bernini between 1656 and 1667, St. Peter’s Square in Rome is an amazing feat of architecture and art. It is located directly in front of St. Peter’s Basilica in the Vatican City (the papal enclave inside Rome).  At the center of the square is an Egyptian obelisk, erected at the current site in 1586, it is the only ancient Egyptian obelisk in Rome to have remained standing since Roman times.

The Plaza Mayor, built during Philip III’s reign (1598–1621), is a grand arcaded square in the center of Madrid and a very popular spot for tourists. Located at the confluence of the paths towards Toledo and Atocha, it was originally the site of the Plaza del Arrabal Market and thus took this name before later becoming the Plaza Mayor.

Trafalgar Square, at the heart of London, is one of the city’s most vibrant open spaces. It is a lively place often used for a wide range of activities including special events and celebrations, St Patrick’s Day, Pride, Chinese New Year and rallies and demonstrations. On the north side of the square you will find the National Gallery that was built in 1838, it displays over 2,000 Western European paintings from the middle ages to the 20th century.

The Grand Place, or Grote Markt in Dutch, is one of the most beautiful squares in Europe with architecture from 3 different eras (Baroque, Gothic and Louis XIV) making their marks on the square and giving it an eclectic flavor. The square is surrounded by Brussels’ Town Hall, nearly forty guildhalls and other beautiful buildings from the 14th to 17th century. The Grand Place is also home of the Flower Carpet, a bi-annual event featuring the creation of a colorful carpet design using more 700,000 cut begonias.

Old Town Square is a historic square in the Old Town quarter of Prague. It is one of two main squares in Prague (Wenceslas Square is the other, just 5 minutes walk away). The square is surrounded with historical buildings such as the Old Town City Hall with the famous Astronomical Clock, the imposing St. Nicholas Church, Church of Our Lady before Tyn and many houses and palaces of various architectural styles and colorful history.

Built in the traditional Spanish baroque style, the Plaza Mayor in Salamanca is one of the most beautiful squares in Spain and the most lively and popular place in Salamanca. On the north side is the City Hall, a Baroque building that has five granite arches and a steeple decorated with allegoric figures. We recommend staying at one of the 11 Best Hotels in Salamanca near this attraction.

Standing at Marienplatz, in front of the city hall “Rathaus” you find yourself right in the heart of old town Munich. Marienplatz used to be home to medieval markets, celebrations, and tournaments. Today, the square is a popular meeting place with its many cafes, restaurants and all kind of stores and it is always crowded and noisy with locals and tourists alike.

Piazza del Campo is the principal public space of the historic center of Siena and one of the biggest medieval squares in the world. It has been Siena’s civic and social center since the mid-12th century. This huge main square is in fact the only one shell shaped and probably most famed for its Palio – a crazy horse race that is run twice a year and brings crowds of thousands.

The Rynek Glowny (Main Square) in the heart of Old Town Krakow is Europe’s biggest market square. It is arguably one of the world’s most beautiful plazas in the world, boasts a plethora of landmarks and myriad restaurants, clubs, and cafes. It is surrounded by gorgeous pastel yellow and peach buildings, including the 13th-century Gothic Town Hall Tower.

Piazza San Marco has been the scene of some of the most important religious and political activities as well as the center of Venetian social life for almost a millennium. Three of Venice’s major sites are located in this square: the Basilica di San Marco; a Byzantine marvel, the Torre dell’Orologio; a famous medieval clock tower, and the Doge’s Palace; the seat of the government of Venice for centuries.

Built in 1928 for the Ibero-American Exposition of 1929, Plaza De Espana in Seville is a landmark example of the Regionalism Architecture, mixing elements of the Renaissance Revival and Moorish Revival styles in Spanish architecture. This magnificent construction is highlighted with polychromatic ceramic tiles and it is flanked by two spectacular towers and a bordering lake.

Originally built as a stadium in the first century for athletic contests and chariot races, Piazza Navona in Rome is nowadays a great meeting place for Romans and tourists alike. The Piazza is lined with luxurious cafes, restaurants and Baroque palaces. In its center is Bernini’s most spectacular fountain, la Fontana dei Fiumi, erected in 1651, the most photographed item in the square. It also features other two fountains and the baroque church of Sant’Agnese in Agone.

Located at the eastern end of the Champs-Élysées, the Place de la Concorde is the largest square in Paris. Architect Jacques Ange Gabriel started construction on behalf of Louis XV in 1754 and it was eventually completed in 1763. Today it is famous for the Luxor Obelisk, a 3,300 year old Egyptian obelisk erected on the square in 1998 and the two monumental fountains – Fontaine des Mers and Fontaine des Fleuves.

The Rynek Square in Wrocław, Poland is a medieval market square with many café, bars, restaurants, and souvenir shops. it is one of the largest squares in Europe and one of the most attractive. In the center, is the Town Hall, the seat of municipal authorities and other institutions that affect the management of Wroclaw. The square is home to precious monuments such as St. Elizabeth, and an interesting fountain constructed from glass panels that provide an interesting contrast with the surrounding buildings.

George Square is the main square in the city of Glasgow, Scotland. Laid out in 1781, it is today home to the headquarters of Glasgow City Council and many buildings from the 19th century. It boasts an important collection of statues and monuments such has the column statue of Walter Scott.