Top 7 Things To Do In Siena 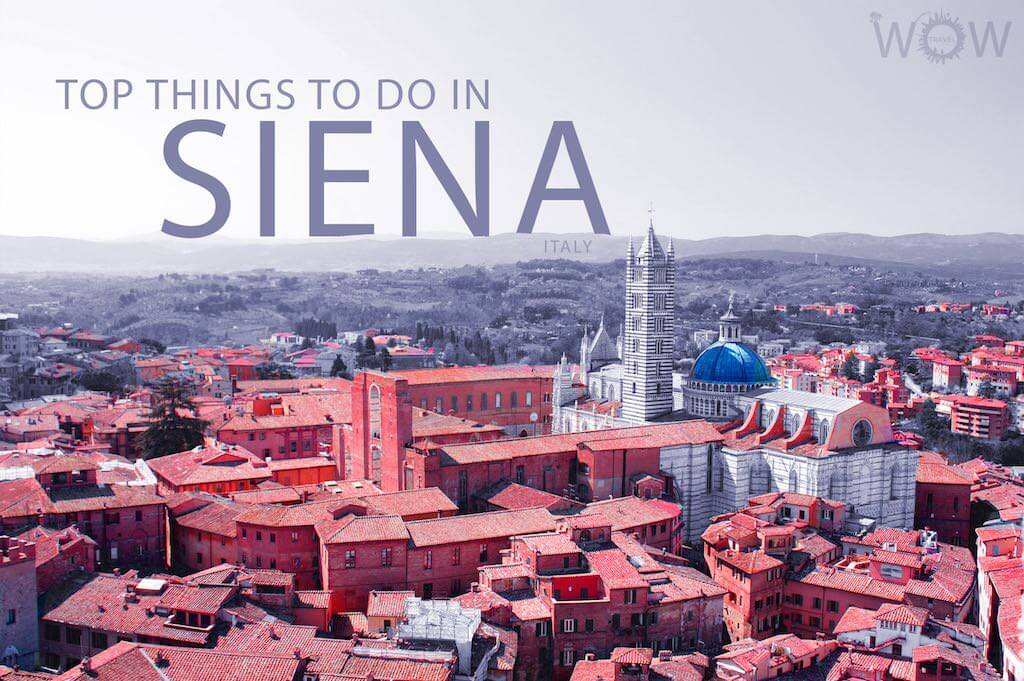 Built on three hills and surrounded by well-preserved walls, Siena is one of the most ancient cities of Italy and one of the few intact Gothic cities in Europe. The Piazza del Campo at the heart of the city along with the Siena Cathedral and its beautiful black and white Italian Romanesque façade are just two of its many landmarks which are only a couple of minutes’ walk away from each other. Siena is medieval streets, mesmerizing art, tempting cuisine and much more. Check out our Top 7 Things To Do In Siena.

Large in scale and ornately decorated inside and out, the Cathedral of Siena is one of the finest examples of Italian Gothic architecture and one of the most spectacular cathedrals in the whole world. The building stands over an existing church that in turn was built over a pagan temple dedicated to the goddess Minerva and it is filled with treasures by Pisano, Donatello, and Michelangelo as well as frescoes by Pinturicchio. The entire floor of Siena’s Cathedral is, in fact, one of the most incredible works of art of all time: a spectacular inlaid marble mosaic floor. Next to the cathedral, which was built in Romanic-gothic style, stands a 77 meter (252 ft) high campanile.

Piazza del Campo is the principal public space of the historic center of Siena and one of the biggest medieval squares in the world. It has been Siena’s civic and social center since the mid-12th century. This huge main square is the only one shell-shaped and probably most famed for its Palio – a crazy horse race that is run twice a year and brings crowds of thousands.

Palazzo Pubblico was built between 1298 and 1310 and dominates the square-shaped shell with its elegant tower (Torre del Mangia). Once housed the Podestà and the Council; today it is a kind of town hall. Made of red brick (typical of Siena) with a travertine base, it presents the image of a fortress. The campanile or bell tower, Torre del Mangia, was built between 1325 and 1344 with its crown designed by the painter, Lippo Memmi. The tower was designed to be taller than the tower in neighboring rival Florence; at the time, it was the tallest structure in Italy. Climb up the tower’s 400 steps to be rewarded by amazing and outstanding views on all sides

San Domenico is a vast 13th-century brick church. Founded by the Dominicans in 1125 as part of their friary. it is the resting place of the head of St Catherine, Italy’s patron saint.

Basilica di San Francesco is a beautiful Franciscan church which was built between 1400 and 1500. It is known for its architecture, originally Romanesque, then Gothic after enlargement works. Admire the architecture, interior facade, chapels, and frescos.

Located just behind the Cathedral, the Baptistery, built-in 1325, is one of the most important religious sites in the city. For many centuries, all the inhabitants of Siena, famous or not, were baptized under the rib vault of the Baptistery. Inside you can admire frescoes and the bronze and marble baptismal font, located right in the center of the Baptistery. Source: turismo.intoscana