Top 10 Things To Do In Florence 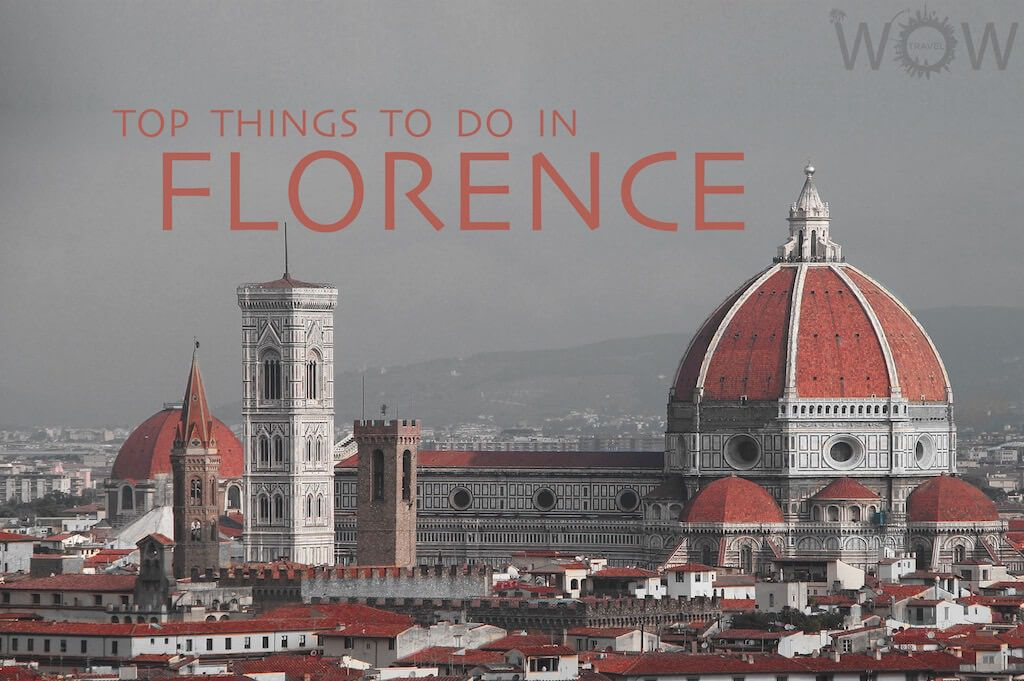 Florence is the capital city of Tuscany and one of Italy’s most stunning cities. The city lies on the River Arno surrounded by gentle hills. It is internationally famous for its beautiful historic city center (a Unesco World Heritage Site since 1982) featuring an impressive collection of art galleries, monuments, churches and palaces. In Florence you can experience the splendor of the Renaissance and visit some of the most beautiful Italian museums such as the Uffizi Gallery and the Accademia Gallery where you can admire David’s by Michelangelo, see universally known Florentine landmarks such as Ponte Vecchio, the Cathedral of Santa Maria del Fiore (Duomo) and much more. Here are some of the top things to do in Florence.

The Palazzo Pitti is a large 15th-century palace situated on the quieter south bank of the Arno river The palace was long the residence of Florence’s rulers until 1919, when it was handed over to the Italian state, which transformed the palace into a museum complex. In spite of its metamorphosis from royal residence to a state-owned public building, the palazzo, sitting on its elevated site overlooking Florence, still retains the air and atmosphere of a private collection in a grand house.

Florence is well-known as the birthplace of the Renaissance and many of the “celebrity” tombs in Florence can be found in Santa Croce (Galileo, Machiavelli, Rossini, Ghiberti, and Michelangelo). Santa Croce was rebuilt for the Franciscan order in 1294 by Arnolfo di Cambio and today it is an open church with a distinctive painted wooden ceiling and featuring frescoes by Giotto.

The San Lorenzo markets are actually comprised of two separate markets. The Central Market (mercato centrale), which is a two-level, indoor food market. The other is the outdoor market full of stalls selling leather, clothing and souvenirs. It runs from the Church of San Lorenzo along Via Ariento all the way to Via Nazionale. The market is as markets go – a cheap and cheerful place with tourists and Italians. Open 9am to 7pm Tuesday to Saturday.

Uffizi Gallery is an art museum in Florence that has the world’s finest collection of Italian Renaissance painting, particularly of the Florentine school. It also has antiques, sculpture, and more than 100,000 drawings and prints. You’ll also see da Vinci’s Annunciation, Titian’s languid Venus of Urbino, the Medici Venus sculpture, some Venetian works by Bellini, and Michelangelo’s technicolor portrait of the holy family.

The Ponte Vecchio is one of Florence’s landmarks and probably the most photographed bridge in the city. The most famous bridge of them all was built at the narrowest part of the Arno. It’s distinguished as being the only remaining bridge to have houses and shops on it. In part this is because something important was built on top of those: the Vasari Corridor. This secret passageway built by Vasari for Duke Cosimo I de’ Medici in 1565 links the Palazzo Vecchio to the Pitti Palace. In 1593, the jewelry stores that tourists so love were brought to the bridge on command of Ferdinando, the Medici heir who thought that the previous tenants – butchers – smelled too bad in his corridor.

Giotto’s bell tower is one of the four principal monuments on the Piazza del Duomo, and it is one of the most recognizable buildings in Florence. It is 84.7 meters (278 ft) high and offers fine views of Florence. It is the most eloquent example of 14th-century Gothic architecture in Florence, combining a strong vertical thrust with the principle of sound solidity, its corner buttresses rising the full length of the tower to the projecting terrace at the top. Getting to the top of the cathedral’s campanile in Florence requires 414 steps, but the view overlooking a sea of red-tiled roofs more than makes up for the effort. You can see San Lorenzo and the Medici Chapel to the north, the Palazzo Vecchio to the south, Santa Croce to the east, and the church of San Miniato al Monte in the far distance on a hill across the Arno. Best of all, Giotto’s bell tower will give you an unparalleled look at Filippo Brunelleschi’s famous dome.

Piazzale Michelangelo is the most famous square in Florence with a magnificent panoramic view of the city, and it’s located in the Oltrarno district of the city. The view from this observation point overlooking the city is justly famous and has been reproduced on countless postcards and snapshots over the years. To get there you will have to walk the tiny streets of San Niccolò neighborhood and you will probably see Clet’s Studio in San Niccolò. Clet is a famous french artist that decided to set up his studio in Florence, a quick visit will surprise you!.

The church is one of the oldest in the Florence area (from 1018) and a beautiful example of Romanesque architecture. It’s free to go inside, highlights are the mosaics above the altar and the small chapel in the back right corner of the church. Walk around the outside of the church, see the cemetery, and take in the views of Florence and the surrounding countryside.

The Basilica di Santa Maria del Fiore (known simply as the Duomo) is not only Florence’s religious center, it’s also the city’s most recognizable attraction and the world’s largest masonry dome. Occupying the Piazza del Duomo in the heart of the city. This massive Gothic cathedral was built in the late Roman times between 4th and 5th century A.D. The magnificent dome was built by Filippo Brunelleschi while the campanile was partly designed by the great artist Giotto during the 14th century on the former site of the Roman church, Santa Reparate. You’ll know you’re in the right place when you find yourself straining your neck to see the church’s massive, iconic dome. The red-tiled cupola was designed by Brunelleschi and is described as a must-see by experts and travelers alike.