Top 10 Things To Do In Seville 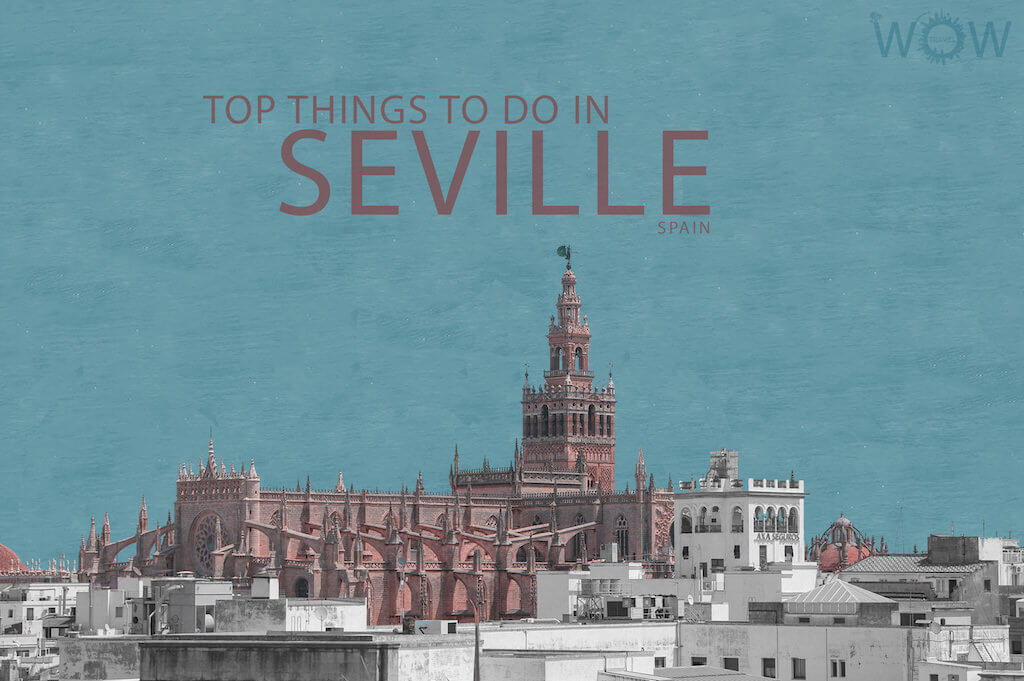 Seville is located in Andalucia, a rocky, sun-baked region on Spain’s southern coast, and it is probably the most underrated city in Spain. Many visitors tend to focus on Madrid and Barcelona while leaving Seville behind. Seville is vibrant city that has a distinctive, historic grandeur, with over a thousand years of impressive architectural styles from Moorish palaces, medieval convents, renaissance churches, and contemporary landmarks. It is the capital of the “Tapas”, home to Flamenco music and home to the famous Spanish sport, bullfighting. People who live in Seville are very well known for their pride in their city, in fact, Sevillanos (citizens of Seville) say that there is no need to go anywhere else, and after visiting this great city we totally agree. If you want to see, taste, feel, hear or smell the real Spain and learn about its vast history, traditions, culture, spirit and monuments – don’t look any further and check out our Top 10 Things To Do In Seville.

Real Alcazar was built by the Christian kings of Castile as a Moorish fort in the 14th century but later converted into a palace with fabulous patios, salons, garden of pools, palms and pavilions. This is the oldest occupied royal palace in Europe and the upper levels of the Alcázar are still used to this day by Spain’s Royal family. Real Alcazar is where Christopher Columbus began to plan his trip to the Americas.

The Plaza de España was built for the Spanish-American Exhibition of 1929, amongst many other buildings and it represents the thematic embrace of Spain and its provinces. The semicircular square of the Plaza de España, has an artificial lake in its center and is flanked by two towers. It portrays the so-called regionalist architecture gracefully thanks to Spanish architect Aníbal Gonzalez’s splendid combination of a brick structure, tiles, marble columns and many different polychrome ceramic decorations.

Located at Plaza de la Encarnacion, Metropol Parasol is the world’s largest wooden structure. It was designed by the German architect Jürgen Mayer-Hermann and was built from 3,400 individual wooden elements and 3,000 load-bearing connection nodes. ​The Metropol Parasol scheme includes an archaeological museum, a farmers market, an elevated plaza, and bars and restaurants, all contained beneath and within the parasol structure.

Triana is a vibrant old quarter in Seville, situated on the left side of the Guadalquivir River and connected to the city by the iconic bridge of Isabell II, otherwise known as Puente de Triana. Triana has evolved into a lively idiosyncratic area packed with charming paved streets, ceramic shops, pretty churches, atmospheric tapas bars and beautiful traditions. The tradition of the “Tapas” is transmitted from generation to generation in the streets of Triana and its residents (or trianeros) have always considered themselves a bit apart and are fiercely proud of their community.

Built in the 15th century, Seville Cathedral is one if the most famous attractions in the city and merits the title as it is the largest Gothic Cathedral in the world and the world’s third-largest church. The Cathedral, 135 meters (443 ft) long, 100 meters (330 ft) wide and 40 meters (130 ft) high, was built on the site of a grand Almohad Mosque and designated a UNESCO world heritage site in 1987 and is famous for being the resting place of Christopher Columbus (transferred here from Havana in 1902). In the back of the cathedral you will find the Giralda tower, the only remaining structure of the 12th-century Almohad Mosque. In fact, it is one of the few Almohad minarets surviving in the world.

At the top of Calle San Luis is the little baroque church of la Macarena, where you can see one of Seville’s best-loved virgins, La Macarena de la Esperanza, that are carried during the Easter processions. Since the 17th century, La Macarena has held the place of honor in the magnificent Holy Week processions that have made Seville famous. During the seven days before Easter, the main streets of Seville close to the normal traffic and street din. 58 processions with 116 large platforms with life-sized images portraying different episodes of the Passion traverse the streets of Seville.

Santa Cruz is the old Jewish quarter of Seville, a pretty neighborhood of Andalucían white houses, with its narrow streets, courtyards and patios. On the busy west side of the district are the Cathedral and Alcazares. Head northeast toward the House of Pilate and you can soon find yourself lost in the photogenic alleyways. Santa Cruz is home to some of the best bars and restaurants in the city.

Built in the 13th century during the Almohad dynasty, Torre del Oro (Golden Tower) was the last major building that the Muslims constructed in Seville. The tower is one of three in the south side of the city where the city wall linked the Alcazar to the river. Back than it served as a military watchtower, nowadays it is one of Seville’s most recognizable landmarks. The views from the top though are spectacular.

The Plaza de Toros de la Real Maestranza is a the oldest bullring in Spain and considered one of the most beautiful bullrings in the world. Seville is one of the most famous cities for bullfighting in the world and there are bullfights in the city for a few weeks every year.

The Maria Luisa Park is a public park that stretches along the Guadalquivir River, these former gardens of the Palace of San Telmo were opened to the public in 1893