The 10 Most Beautiful Towns In Andalucía 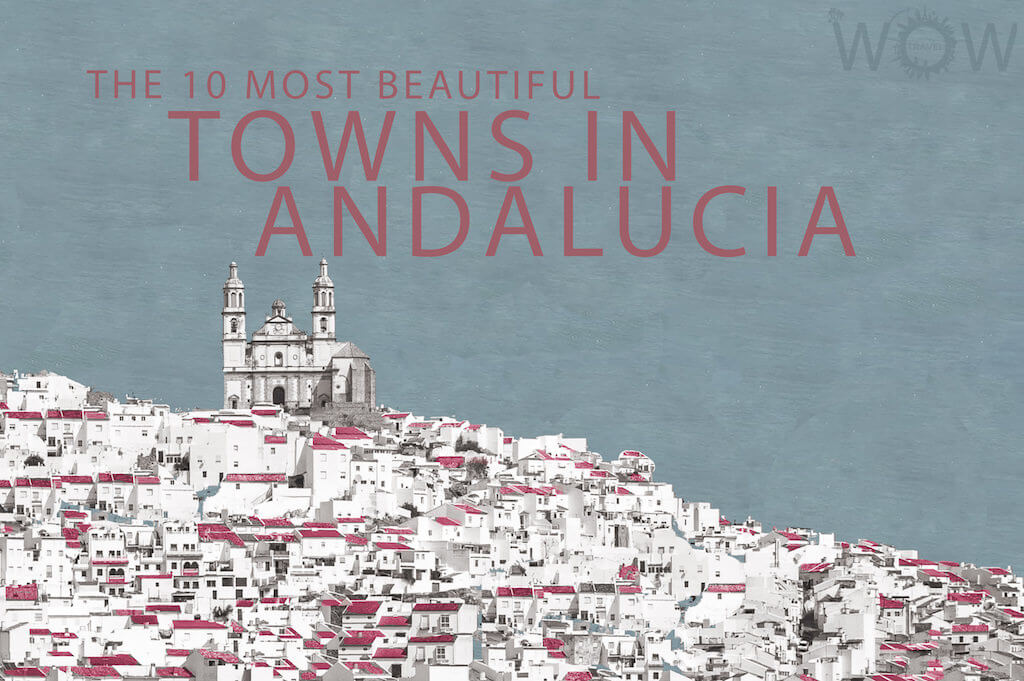 One of the many wonderful things about southern Spain is that there are so many little villages to discover. Andalucía, a rocky, sun-baked region on Spain’s southern coast, has its own character and its own specialties, which makes every trip an authentic experience. Instead of visiting only Málaga, Granada, Córdoba or Seville, try exploring the interior of Andalucía along the Route of the White Hill Towns (Ruta de los Pueblos Blancos). This charm bracelet of charming villages gives you wonderfully untouched Spanish culture. From Moorish palaces, traditional towns and villages to golden beaches and hot flamenco. We compiled a list of The 10 Most Beautiful Towns In Andalucía.
Booking.com

Medina Sidonia is a small village set atop a hill called “Cerro del Castillo” in the Province of Cadiz. The village has Roman and medieval walls and tidy narrow cobbled streets. At the top of the hill you will find an old Muslim fortress, and the Torrestrella Castle, both dating from the 12th-14th Centuries. Medina Sidonia is also famous for having within its township numerous fighting-bull ranches.

Alhama de Granada is a pretty, ancient spa town located approximately 53 km (33 miles) from Granada. It is perched precariously at the top of a ravine from where the Rio Alham carves through otherwise rolling countryside. There are 6,000 inhabitants in the town, and its picturesque location, thermal springs, affordable tapas and Spanish charm attract many visitors. Source: andalucia.com

Nestled in the hillside with its white-painted houses interlaced with tiny streets, Casares is a unique village of Arab origin that has been designated as a Historical-Artistic Site. Its main tourist attractions are the quaint streets, the ruins of the Medieval castle and the Birthplace of Blas Infante. Besides walking along the narrow, cobbled streets with their Moorish design, Casares has a 2 km (1.2 mile) coastline, a beautiful natural environment and the Arab Castle at the top of the hill where the views are spectacular.

Ronda is a city in the Spanish province of Málaga. It is located about 100 km (62 miles) west of the city of Málaga with a population of approximately 35,000 inhabitants. Ronda was first settled by the early Celts. The current Ronda is however of Roman origins, having been founded as a fortified post. Ronda received the title of city at the time of Julius Caesar. The city is situated in a very mountainous area about 750 meters (2,460 ft) above sea level. The Guadalevin River runs through the city, dividing it in two and carving out the steep El Tajo canyon upon which the city perches. Three bridges, Puente Romano, Puente Viejo and Puente Nuevo, span the canyon. The Puente Nuevo is the tallest of the bridges, towering 120 meters (390 ft) above the canyon floor. All three serve as some of the city’s most impressive features. The city has tons of accommodation options. Check out our list of 11 Best Hotels In Malaga, Spain. Source: twistedsifter

Vejer is a Moorish looking hilltop town, a place of white-washed houses, narrow winding streets, excellent food and wine and the unspoilt beaches of the Costa de la Luz are only a 10-15 minute drive away. Today this picturesque town still retaining much of the wall around the old part of town which blends in well with the newer part.  Many parts of the town have views to the sea and you can even see the Moroccan coast on a clear day. Vejer is a town steeped in history, having been used as a fortress town by the Phoenicians, later by the Romans and then underwent five centuries of Moorish rule until it was captured by King Ferdinand of Castille in 1248. The famous battle of Trafalgar took place just off the coast near the town in 1805. Source: vejerdelafrontera

40 minutes north-west of Ronda, Zahara de la Sierra is one of the most spectacularly situated villages in Andalucía. At the foot of the Sierra del Jaralin at the northern end of the Grazalema Natural Park, this picturesquepueblo blanco overlooks the fabulous, azure-blue waters of the vast Embalse below. High above the village, perched on its rocky outcrop, the remains of its Moorish castle stand guard over the whole valley. Scattered below on the slopes are the whitewashed houses of the village. The town was originally an important Moorish outpost, overlooking and guarding the vast green valley below. The defensive system of the Nazari border consisted of an extensive network of towers and watchtowers that were visually linked along the entire border of the Muslim Kingdom. Between Ronda and Sevilla, Zahara was of vital strategic importance, the perfect site for a fortress. The castle was built in the 8th Century and rebuilt once more in the 14th Century. Source: rusticblue

Grazalema is a small mountain village located in the northeastern part of the province of Cádiz, in the autonomous community of Andalucía, Spain. It has been made quite famous for the breathtaking scenery and is popular for nature enthusiasts, walkers and cyclists. The surrounding natural park named Sierra de Grazalema is a vast protected area of rugged limestone mountains, which are famous for being the rainiest place in Spain.

Olvera is a beautiful friendly town, perched on top of a hill and can be seen for miles around. It is full of olive groves that provide the best extraction of olive oils in Andalucía. The town boasts the beautiful Neo-Classical Church at the summit in the Plaza de Iglesia. Adjacent to the church is the completely renovated and restored Moorish Castle, together with the Castle Museum and gift shop.

The town of Ubrique is a beautiful pueblo blanco, a white-washed village built right up against a steep mountain cliff. It has interesting traditional architecture and an ancient leather tradition. For over a century, Ubrique has been world-renowned for its leather industry supplying the likes of Loewe, Louis Vuitton and Gucci. Ubrique is also the birthplace of famous bullfighters.

Gateway to the Pueblos Blancos Route, Arcos is considered one of the most beautiful towns in Spain. There are traces of the first prehistoric settlers and of the Romans at the Sierra de Aznar Archaeological Site. But the people the town owes its relief and current layout to are the Muslims. Walking along the incredibly narrow, steep streets and under ancient archways, the visitor enters the old quarter, declared a Historical Site. Monumental treasures in this part of the town include the Los Duques Castle (15th Century), the Matrera Gateway (11th-14thCenturies) and the remains of the walled town, with its palaces and manor houses, the Santa María Basilica, the San Pedro Church, as well as numerous churches, chapels and convents. Source: cadizturismo