Top 10 Things To Do In Malaga

Located just 129 km (80 miles) north of Africa, Malaga is a port city on southern Spain’s Costa del Sol and the largest southernmost city in Europe. Its rare combination of tropical heaven right next to an urban oasis, hot beaches, mountains, historic monuments, a charming old town and a lively nightlife make of this city a perfect destination. Some people say Malaga is a small version of Barcelona. The beautiful beaches of Spain’s Costa Del Sol may be what attracts flocks of tourists to nearby Malaga every summer but the city itself has many attractions to offer as well. Check out our Top 10 Things To Do In Málaga.

Málaga Cathedral  – Málaga Cathedral is located in the middle of the old town on the remains of the Almohad mosque, which itself replaced a Christian basilica of the Visigoths. Its Gothic Renaissance and Baroque architectural elements reflect the long period of construction that began in 1582. It is, though, still unfinished as the second tower was never built. The funds were, instead, diverted to fund the American War of Independence. As a result, the cathedral is often referred to as The One-Armed Lady.

Alcazaba  – The 8th century Alcazaba is a Moorish fortification that was used as the Palace of the rulers of Malaga from the 11th century. It is one of the most emblematic monuments of the city. Thought to be the most preserved citadel in Spain, the Alcazaba overlooks Malaga’s port and is close to the city’s other important attractions such as the Cathedral and the Gibralfaro Castle.  It is enclosed by two defensive walls, and its inner citadel is reached by a winding street which passes through the Puerta de las Columnas, Arco del Cristo and Arcos de Granada gates and attractive landscaped gardens. A small palace within the inner perimeter is now the home of Malaga’s Archaeological Museum.  Visitors should also take in the ruins of a 2nd-century Roman amphitheater found close to the Alcazaba’s entrance. Source: thingstodoeverywhere

Gibralfaro Castle – Standing proudly on the Mount Gibralfaro hilltop above the Alcazaba, the Castillo de Gibralfaro is another medieval Moorish fortress. It was built in the 10th century and used until 1925 as a military base. From the tip, you will get the best view of Malaga. 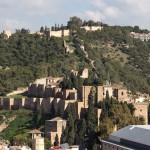 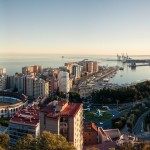 Botanical Gardens (La Concepcion Jardin Botanico) – a Concepcion Historical-Botanical Gardens were created in about 1855 by the Marquis and Marchioness of Loring and subsequently extended by the Echevarria-Echevarrieta family. They are home to an exquisite open-air collection of tropical and subtropical flora. Plant species from Europe, America, Asia, Africa and Oceania are all on show here. 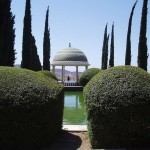 Malagueta Beach – Malaga is blessed with miles and miles of beaches, with La Malagueta Beach being the most popular in the city for both locals and tourists. It is actually an artificial beach made from sand imported from the Sahara desert. 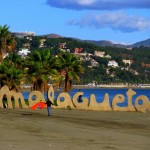 Market Hall (Mercado de Atarazanas) – For a real Malaga experience, seek out the indoor food market, Mercado de Atarazanas – a riot of seasonal colors, tastes, and smells. Malaga’s central market dates back to the 14th Century and originally was built by the Moors as a ship builder’s yard. 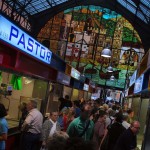 Basílica Santa María de la Victoria – Basilica of Santa Maria de la Victoria is outside the historic quarter but still within the urban district. it houses an extraordinary little crypt, decorated top to bottom with playfully macabre figures of skeletons and cherubs. The interior of the church is beautiful with an architectural quirk.

Holy Week – Holy Week in Malaga is an ancient tradition that dates back to the age of the Catholic Monarchs For more than 500 years of history, Holy Week of Malaga has been constantly present in the religious and popular feeling of people from Malaga. On February 16, 1980, it was declared of International Tourist Interest. A spectacular event of religious, social and cultural character that attracts millions of visitors to the capital of the Costa del Sol. Every year, during the Passion Week in Malaga takes out to the streets a real festival perceptible by the five senses: processional thrones carrying images that are swung all along the entire route, thousands of penitents lighting and giving color with their candles and robes, processional marches, as well as aromas of incense and flowers filling the air as the processions pass by and thousands of people crowded to see and applaud their favorite tronos (floats, thrones). Source: semana-santa-malaga 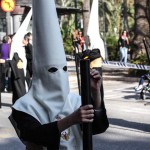 Montes de Malaga – Montes de Malaga is a natural park located north of the city with. It is a great day trip for hikers with its many waterfalls and variety of wildlife.

Plaza de toros de La Malagueta – La Malagueta is a world-class bullring that was built in 1874 by the architect Joaquín Rucoba. It can host as many as 9,032 spectators, and home to the most important events of the bullfighting season, like the Easter bullfights, the Picassian Gala, the August Fair or the bullfight dedicated to Málaga’s Patroness. 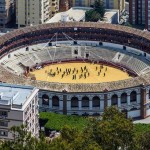