Top 10 Things To Do In Granada 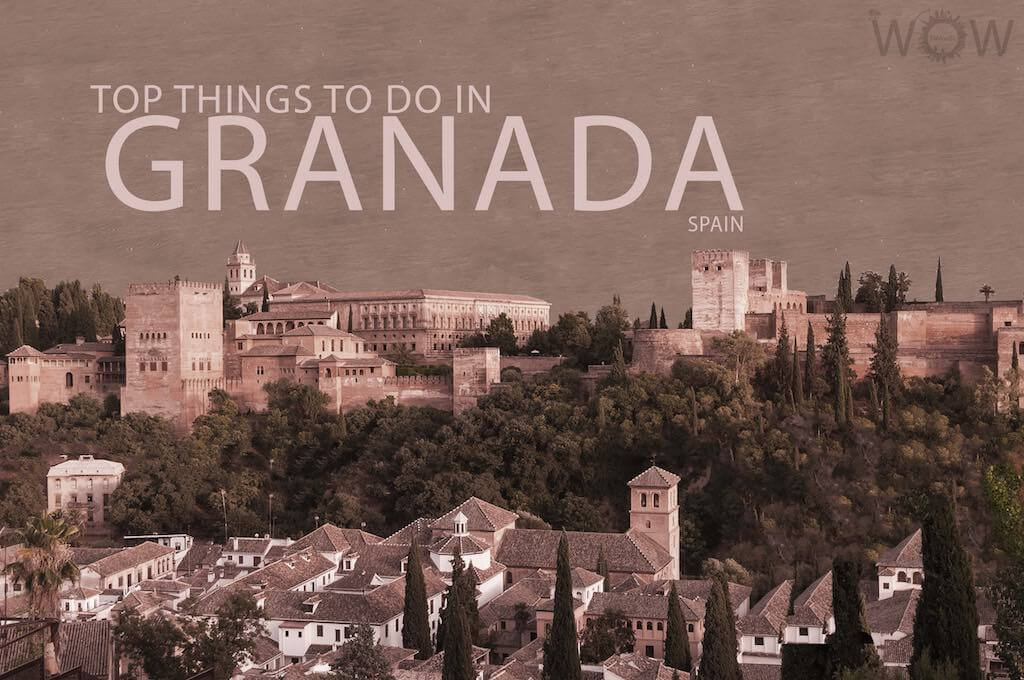 Granada, one of the pearls of Spain, is home to 3 UNESCO World Heritage sites (Alhambra, Generalife and Albayzin), all of which are exceptional reminders of Moorish Spain. Many visitors come here just to see the extraordinary Alhambra Palace, one of the most spectaculars of all European monuments, but once they arrive they realize there is much more to see and explore. Check out our list of the Top 10 Things To Do In Granada.

The Alhambra, which overlooks the city from its position on Sabika Hill, is a palace and fortress complex built by the Moorish monarchs of Granada. The beautiful Alhambra Palace is one of the best-preserved medieval Islamic palaces in the world and a unique and exceptional example of an Arab palatial city from the Middle Ages.

The Generalife is located on the hill Cerro del Sol, to the east of the Alhambra fortress. It was built by the Nasrid sultans as a summer palace for the Muslim emirs, who ruled this part of Spain in the 13th and 14th centuries. The Generalife is composed of a series of magnificent gardens, where every corner holds a novelty and a pleasant surprise for the eyes, with a minimum of obtrusive buildings.

El Bañuelo are old arab baths (Hammams) constructed in the 11th century. Bathhouses in the Moorish world served far more than only as bathing establishments. These were places where deals were struck, partnerships explored and politics discussed. The Arabs inherited the Roman springs tradition from Byzantium and Rome through Middle East and North Africa cities.

The Sacromonte district is a picturesque area running up from the Albaicín into the hills and situated above the city itself. There are cave houses in this area, dwellings set into the hillside. It is the most typical place to see Flamenco and the area is populated by gypsies, bohemians and Flemish artists alike for centuries. The Tablaos are all along this road. Source: knok

The district of El Albayzín is a UNESCO World Heritage City in itself that retains its whitewashed houses with beautifully decorated balconies and its narrow winding streets of its Medieval Moorish past. Simply walk around and soak up the atmosphere. At the top is the Mirador San Nicolas, with stunning views of the the Sierra Nevada mountains and the Alhambra palace. Walk up from Plaza Nueva through the Albaicin and find a spot on the wall.

The majestic Cathedral of Granada was built during Charles V’s reign a few years after the Reconquista on top of an existing mosque, to symbolize the triumph of Christianity over Islam. Thanks to the talent of Diego de Siloè, the project fused Gothic and Renaissance styles, with a beautiful cupola with stained glass and three entrance doors: Ecce Homo, San Jerónimo and Perdón. Inside you can admire the great arch, connecting the chorus to the naves and the silver tabernacle on the center of the sanctuary; also worth mentioning, a magnificent organ from the 17th Century and the Cathedral Museum. Source: nozio

Built in the early 14th century, Corral del Carbon, is the only “funduq” (inn) from the Moorish period left intact in all of Spain, and it’s been restored quite nicely. This well preserved urban warehouse, located behind the town hall, served as an inn for merchants in transit, warehouse and wholesale market.

The Royal Chapel of Granada houses the sarcophagi of Queen Isabella I and King Ferdinand, their daughter Juana and her husband Phillipe. This impressive domed chapel is attached to the Catedral but has a separate entrance. The chapel is constructed in the late Gothic style under the order of Ferdinand and Isabella after the capture of Granada.

La Alcaicería is an old arab market and a typical neighborhood of Muslim culture made ​​up around narrow streets. The whole neighborhood of the Alcaicería was once an Arab marketplace, known as the Grand Bazaar of Granada, but was almost completely destroyed by fire on July 20, 1843.

Granada is located at the foot of the “Sierra Nevada”, the most southern ski resort in Europe and the highest mountain in Spain(3,478 meters/11,410 ft) with great possibilities for winter-sports. Skiing in Sierra Nevada begins in November.