Top 10 Things To Do In Havana 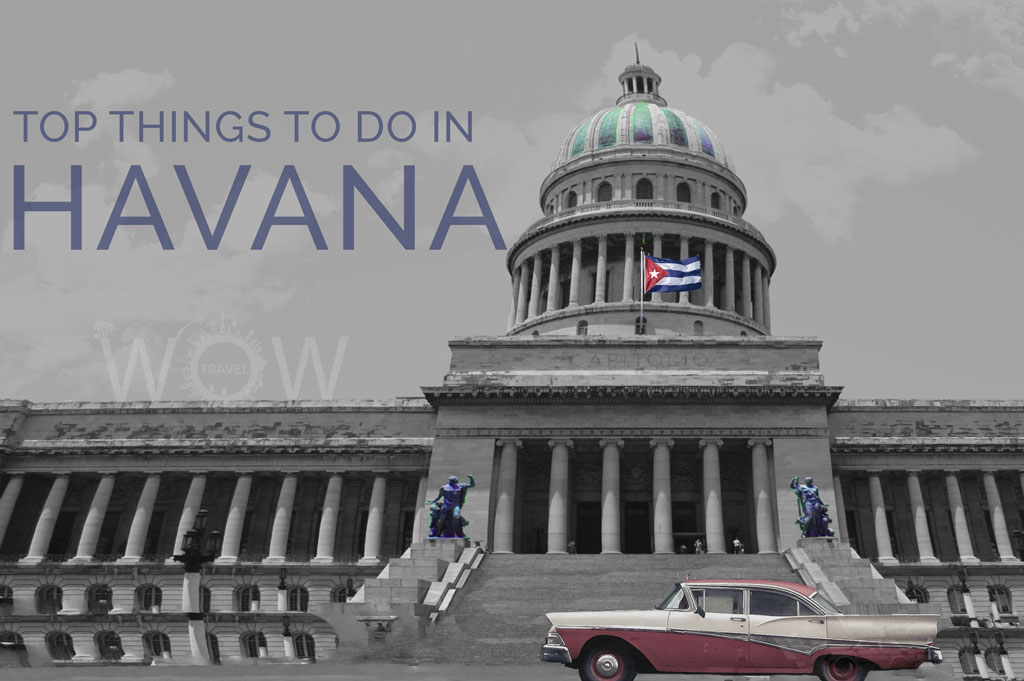 Havana it’s not just the capital of Cuba but also the capital salsa of the world. Havana has given us one of most refreshing and popular drinks “Mojitos”, the most popular Latin artist of all times known as “Queen Celia Cruz”, the best dancers, musicians, the best doctors in all of Latin America come from this delightful city.

Because of its poor economy and oppressive regime, some may believe that Havana is not safe for tourists.  However, a strong military and police presence in the tourist areas makes this city almost crime-free which allows Turner’s to wander around the city and simply enjoying it. Walking around Havana is like going back to the past, you can still feel the Spanish, the African and also the Russian and American influence. Havana is fun, addictive, sexual, sensual, sunny, affordable and always ready to receive you with open arms. Whether you want to just sit at one of the spectacular Havana beaches, visit the largest rum factory in the world, party in one of the many all-inclusive hotels or to sit at the main square and play chess with locals, Havana is waiting for you. WOW Travel shares with you The Top 10 Things To Do In Havana.

When one walks around this part of the city it seems that time froze. You can almost see everything in black and white. La Vieja Havan, in Spanish, is filled with stylish Neoclassical and Baroque houses, border cobbled squares and narrow streets, and many have been carefully restored to show the visitors their former glory. This is area is home to the best pieces of colonial architecture such as the Catedral de San Cristobal, the Castillo de la Real Fuerza and the famous squares of Plaza Vieja and Plaza de Armas. You cannot leave Old Havana without visiting La Bodeguita del Medio, a charming restaurant where Hemingway used to enjoy delicious seafood meals and ice-cold mojitos. Old Havana. We must say that it is a  UNESCO world heritage.

There is no tourist who does not have a great memory or pictures at the Malecon. This seafront promenade is visited by locals and tourists alike. While walking along the Malecon one can see some of the most famous spots in Havana along with its best preserved 20th-century buildings in a wide range of architectural styles, from Art Deco to Neo Moorish. The Malecon continues to be popular among Cubans, especially among those of lesser means whose other means of entertainment are limited. It is the perfect place to make new friends, locals who are eager to share with you their culture and tips on where to eat the best Cuban food or to have the best Mojito.

Right across the hotel area, on top of the Cabana hill, is the monumental Fortaleza de San Carlos de la Cabaña. Until the end of the 18th century, this was the largest fort the Spanish had ever built, as well as the most costly. Nowadays, it houses a few museums like the Museo de Comandancia del Che, with the office of Che Guevara preserved as it was during his time here. Lots of tourists come to the fortress at night to see the ceremony of the “Cañonazo” when actors dressed in 19th-century costumes perform a cannon-firing ceremony at 9 pm each evening.

This magnificent monument was the main government building in Cuba until the Cuban Revolution in 1959 and is now home to the Cuban Academy of Sciences. It was built in a blend of Neoclassical and Art Nouveau styles and to many it is reminiscent of the American Capitol building. It is an unmistakable landmark for those wandering around Havana; its huge dome is visible from almost anywhere in the city.

One of the most important theatres in all of Latin America and surprisingly one of the world’s largest opera houses right in the middle of the Caribbean. For art and architecture lovers this is just an oasis of beauty. We had the chance to attend a performance here and it was a memorable experience. This theatre has hosted a wide variety of performances by some of the most famous celebrities in the world. Today, the theater is home to Cuba’s National Ballet and Opera. The building includes a concert hall, conference rooms, and a video screening room, as well as an art gallery, a choral center, and several rehearsal halls for dance companies.

Is not one of the most beautiful squares in the world but it is definitely one that is filled with strong historical significance. Thousands of people have come to this plaza to listen to one of many of Fidel Castro’s speeches or to be blessed by John Paul II in 1998. A  white marble statue of national hero Jose Marti and a 109-meter gray tower decorate the square. An elevator allows access the top of the memorial, at 109 m one the tallest points in the city.

The Morro Castle as tourist call it in English, stands proudly at the entrance of the Bay of Havana in the Parque Historico Militar. This place saw great battles and protected the city in numerous occasions. Inside the gates is an exhibition on the lighthouses of Cuba. There was actually a watchtower here until the British blew it up during their successful siege in 1762. Today, its original lamp still shines, and the fort is open to visitors who can enjoy beautiful views over the ocean and the city of Havana from its upper platforms.

This “paseo” is a street in Havana that separates downtown Havana and Old Havana. It is without a doubt the most beautiful street in Havana. Beautiful terraces, marble benches, bronze lions, and iron lampposts impart the feel of glamour and elegance the city once had. This street was indeed home to some of Havana’s wealthiest families many decades ago. Elegant old cinemas, mansions, and hotels from the 19th and 20th-century line the street, many of which have been carefully restored.

Prior to the Revolution, the neighborhood was home to many of Havana’s upscale residents. There are many large houses and mansions here. This district and the Country Club were the most glamorous spaces in the Havana of the 50s. There are also some of Havana’s more modern hotels such as Hotel Melia Habana (which is one of the 11 Best Hotels in Havana), Oasis Panorama Hotel and Occidental Miramar, beaches and private rental houses. Take a stroll down Avenida 5 ( Havana’s 5th avenue) and enjoy a delicious ” cafe Cubano” while watching life go by Havana style.

A short drive from Havana’s city center, we fin Playas del Este, a long stretch of palm-fringed beach that runs for miles. This is a great alternative for those who are unable to visit the more remote beach resorts in other parts of Cuba. Along Playas del Este sightseers will find hotels, restaurants, and all the regular tourist facilities. The beach is divided up into sections, with one of the best stretches at Santa Maria del Mar, a popular tourist spot. Another beautiful section and a locals’ favorite is at Guanabo, although this area offers fewer tourist services.