Top 10 Things To Do In Toledo 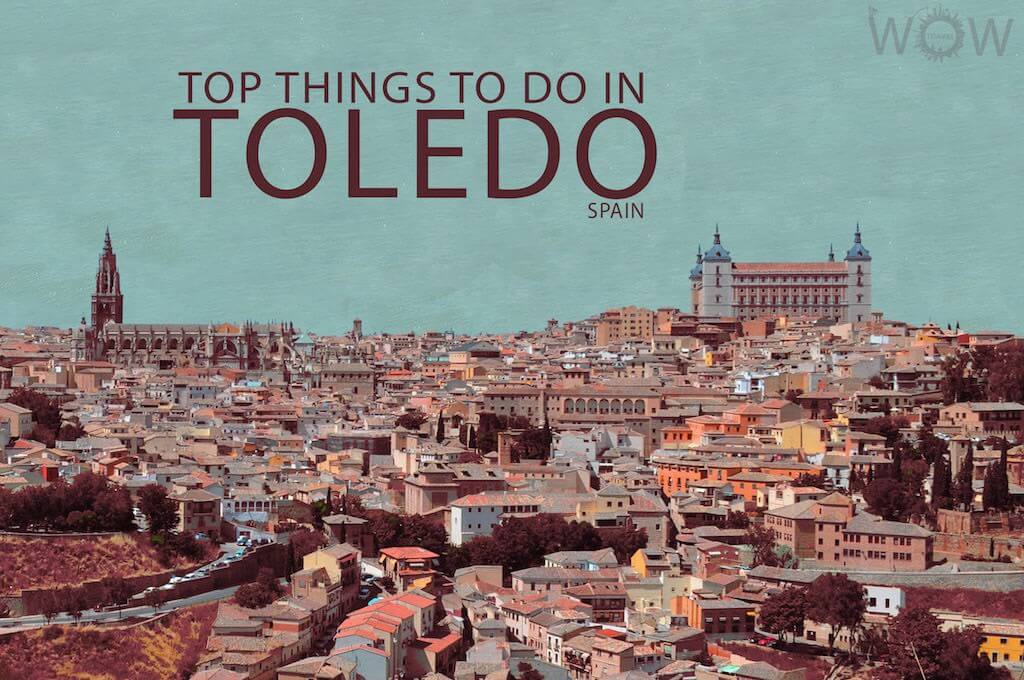 Standing on a hill high above the Tagus River, Toledo is a historic walled city in central Spain as well as the former capital of Spain. It has been an important center of culture to the Romans, Catholics, Jews and Muslims for nearly 3,000 years. Behind its walls, Toledo preserves an artistic and cultural legacy in the form of palaces, fortresses, mosques, churches and synagogues, which has led to it being declared a World Heritage Site. It is a great city to explore by foot, with medieval gates, Arab walls, bridges over the Tagus River, winding streets with many bars and cafes, and a great sense of adventure. Check out our Top 10 Things To Do In Toledo and get started.

Until you have seen Toledo, you have not seen Spain

Built in the 13th century, Toledo Cathedral is a massive Gothic structure with so much history behind. It was built on top of a mosque, that used to be a church before, and considered one of the greatest Gothic structures in all of Europe. Construction began in 1227 under the rule of Ferdinand III and work lasted for three centuries. As a result of the lengthy construction period, a mixture of architectural styles can be observed. It may be the second-largest cathedral in Spain, after Seville Cathedral, but it is the most important one. The Cathedral of Toledo is huge and its imposing size is a reflection of the historical importance of Toledo as the spiritual center of the Spanish church.

As you approach Toledo from Madrid you’ll spot the Alcázar (fortress) from the distance as it strategically overlooks the eastern plains of Castile from above the Tagus river. The building dates back to the 10th Century when it was the most important city of central Moorish Spain. Under Christian rule, it was supposed to be a royal residence but the court of Carlos I moved to Madrid so it served little purpose and became an army academy. The Alcazár became famous during the Spanish Civil War when it was almost destroyed during a 70-day siege. Franco had it rebuilt as a military museum. Source: spanish-fiestas

This little 14th-century chapel, situated on a narrow street in the old Jewish Quarter, is home to El Greco’s masterpiece “The Burial of the Count of Orgaz”, and a de Graaf pipe organ that makes it a choice venue for organ concerts.

The El Transito Synagogue was built by Samuel Ben Meir Ha-Levi Abulafia Scion of an old Jewish family. The synagogue was spared when the Jewish district of Toledo was attacked by the mob in 1391, during a wave of anti-Jewish massacres. When the Jews were expelled from Spain in 1492, the synagogue was turned into a Christian worship place, and a bell tower was built on to the exterior. In 1970 the synagogue, along with the neighboring Sephardi Museum, established in 1964, became the National Museum of Judeo-Spanish Art, a state institution under the control of the Spanish Ministry of Education and Culture. The richness of the decoration was considered by the post-emancipation Jews of Europe as a proof of the high social status that the Jews of Spain enjoyed prior to their expulsion. Source: karenbrown

Cristo de la Luz was built during the 10th century and turned into a Christian church after the taking of Toledo by Alphonse the 6th in 1085. Although this mosque was constructed in 999, it is exceptionally well-preserved and there are many decorations to admire inside.

The Monasterio de San Juan de Los Reyes is a 15th-century monastery that was built on Royal demand during the reign of the Catholic King and Queen (1477–1504). It is marvel of Gothic architecture, especially the flamboyant Gothic, designed by Juan Guas that is buried in the chapel of the church of San Justo. It was built to commemorate both the birth of Prince John (King’s sun) and their victory at the Battle of Toro over the army of Afonso V of Portugal.

Puerta Bisagra and the Old City

Puerta Bisagra is the main gateway to Toledo’s Old City. The incredible enormous stone gateway is actually two gateways — one built around the 3rd century A.D. and the other added in the 16th century. It’s a wonderfully impressive piece of masonry to see. The Puerta Bisagra is also the entrance to the Old City, where you can wander for hours shopping at craft stores, visiting little galleries, enjoying a cafe con leche in a cute coffee shop or eating tapas at one of the area’s tapas bars. The diversity of artistic styles makes the old quarter a real open-air museum. Source: seriouslyspain

“Some cities have old quarters, and then there are some cities that make you feel like you are in a living museum wherever you happen to stand… and Toledo is one of those”

Synagogue of Saint Mary the White

The Synagogue of Saint Mary the White, originally known as the Ibn Shushan Synagogue, is a museum and former synagogue with one of the most beautiful wooden Moorish ceilings anywhere. It is worth a visit especially since it has a lot of impressive Moorish Architecture inside.

Puente de San Martin Bridge is located to the west of the old city of Toledo, it is one of the most important historical and monumental bridges in Spain. Built in the early 14th century with defensive towers at each side, it crosses the Tagus River and is part of the city’s medieval heritage.

Plaza Zocodóver is the main plaza of Toledo is named after the market that was once held here in Moorish times. It is a popular meeting spot for locals and travelers alike. Make sure to walk along the bustling street Calle del Comercio with its many shops and cafés.