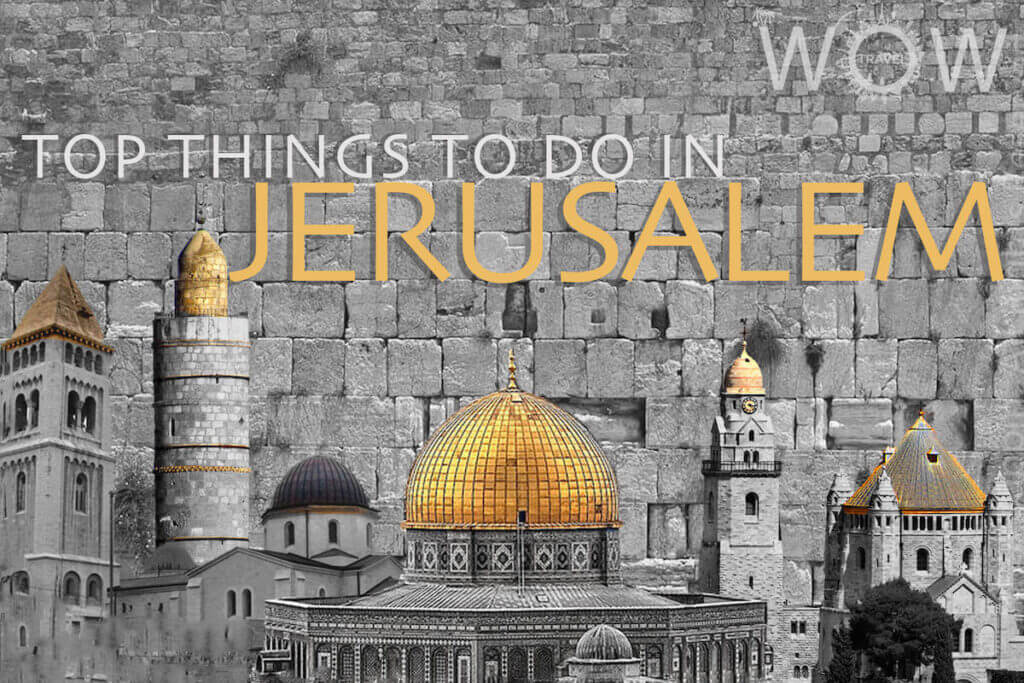 Located in the Judaean Mountains between the Mediterranean Sea and the Dead Sea (the lowest point on earth) and surrounded on all sides by valleys. Jerusalem, the capital of Israel, is one of the most ancient cities in the world with an intriguing history that stretches back thousands of years combined with a bustling modern city. It is considered the holiest city in the world due hotto its importance to three of the world’s main religions; Judaism, Christianity, and Islam. Jerusalem is a one-of-a-kind destination laden with history, not even Rome can beat Jerusalem in terms of Religious history. Enjoy archeological relics, spiritual landmarks and world-class cuisine all in one place. Jerusalem is an incredibly captivating city that is firmly cementing itself as a contemporary and hip place whilst retaining the intriguing ancient, spiritual vibe that it’s mostly known for. Here we have a list of our top 15 things to do in Jerusalem.

The Knesset is responsible of legislating, establishing a government, taking policy decisions, reviewing government activities, and electing the President of the State and the State Comptroller. The Knesset offers guided tours on Sundays and Thursdays between 8:30 am – 14:30 pm. Groups and individuals must arrange their guided tour in advance.

One of Jerusalem’s most colorful outdoor spaces, also known as “The Shuk”. The Machane Yehuda Market is very popular with locals and tourists alike. These days this typical Mediterranean style outdoor market is more accessible and there is something here for everyone. From fresh fruits, vegetables, fish, meat, cheeses, seeds and spices to wines, liquors, clothing, shoes and even housewares, textiles, and Judaica. In addition there are many cool Middle Eastern cafes (such as Coffee Roastery and Café Mizrachi) and traditional restaurants serving food from all over the world (Pasta Basta, Ichikadana, Ochlim B’Shuk and Hachapuria). Try the Yalla Basta’s Bite Cards that enables you to be a Jerusalem native for a day and get a taste from the best stands in the market, including audio tour, with all the stories and the legends behind the market. Tickets and more info Here.

Haas Promenade comprises of several walkways and parks with breathtaking panoramic viewpoint of the Holy Land.

The Via Dolorosa (“Way of Grief” in Latin) is a street within the Old City of Jerusalem, following the final footsteps of Jesus from arraignment to crucifixion while carrying the crucifixion cross. There are a total of 14 stations along this path, based on events that occurred on the way to the Golgotha hill, the site of crucifixion, which is located at the Church of the Holy Sepulcher. Eight stations are marked along the old city road, while 6 additional stations are places in the compound of the church.

Church of the Holy Sepulchre

The Church of the Holy Sepulchre is a church within the Christian Quarter of the Old City of Jerusalem. It is a few steps away from the Muristan. It covers what Christians believe is the site of the most important event in human history: the place where Jesus Christ rose from the dead. Inside, there is a bewildering conglomeration of 30-plus chapels and worship spaces. These are encrusted with the devotional ornamentation of several Christian rites.

The Western Wall, (‘the Kotel’ in Hebrew), is the most significant site in the world for the Jewish people. It is sacred because it is a remnant of the Herodian retaining wall that once enclosed and supported the Second Temple. Jews from all over the world gather there to pray and people write notes to God and place them between the ancient stones of the Wall. Wander between the alleyways of the Jewish Quarter of the Old City. It incorporates many holy and historical sites, restaurants, museums, the City of David, the Temple Institute, the Herodian Quarter, the Courtyard of the Old Yishuv and other interesting sites.

Don’t miss the ‘Tour of the Western Wall Tunnels‘ – Hidden layers of the Wall are revealed underground. They tell the story of ancient Jerusalem and of generations of longing for it. The tour takes approximately an hour and 15 minutes and you must book it in advance.

Temple Mount and the Dome of the Rock

The Temple Mount is the holiest site in Judaism, the third holiest site in Islam, and a revered site to Christians. To the Jews it is known as Har HaMoriyah (“Mount Moriah”) and Har HaBayit (“Temple Mount”); to Muslims it is known as Haram el Sharif (“the Sacred Noble Sanctuary”). Because of its importance to three major religions, its ownership has been hotly contested for nearly two thousand years.

The Dome of the Rock is a impressive, iconic, gold-topped shrine located on the Temple Mount in the Old City and the most famous Islamic site in Jerusalem. It was initially completed in 691 CE at the order of Umayyad Caliph Abd al-Malik during the Second Fitna. The Dome of the Rock can be seen from all over Jerusalem.

“Ten measures of beauty descended to the world, nine were taken by Jerusalem.”
– Talmud: Kiddushin 49b

The nation of Armenia was the first nation to declare itself a Christian nation. They did this in 301, before the days of Constantine, but Armenians had been living in Jerusalem since 95 B.C. Today the Armenian “quarter” covers about one-sixth of the Old City. It is located in its southwestern corner and can be accessed through the Zion Gate and Jaffa Gate.

Jerusalem’s Citadel, known as the ”Tower of David”, is a historical and archaeological asset of international significance. The Citadel is a medieval fortress with architectural additions from later periods. It is located near the Jaffa Gate, the historical entrance to the city and the point where the East meets the West. It bears cultural and architectural values and has been the symbol of the city of Jerusalem for generations. Inside is the Tower of David Museum, which relays the story of Jerusalem. While here, make sure you climb up to the rooftop for one of Old City’s best views.

The Christian Quarter sits in the northwest corner of the Old City and can be accessed through the Damascus Gate, New Gate, and Jaffa Gate. It is home to The Church of the Holy Sepulchre, many churches and monasteries, a few residences, and several souvenir shops, restaurants, coffee shops, and some of the best hotels in Jerusalem to serve the many tourists and pilgrims that pass through the quarter.

Located east of Jerusalem’s Old City and separating it from the Judean Desert, the Mount of Olives is one of the most prominent sites in the Jerusalem vicinity mentioned in the Holy Scriptures and it is the location of many biblical events. At 820 meters (2690 ft), it is Jerusalem’s highest peak and offers a great view of the Old City. From the 3rd millennium B.C. until the present, it has served as one of the main burial grounds for a majority of Jews, boasts 150,000 graves that date as far back as 15th century. The two-mile long ridge has three summits each of which has a tower built on it. The southern part of the Mount was the necropolis of the ancient Judean kingdom.

The Montefiore windmill is one of Jerusalem landmarks. It’s a cupola-capped English-styled mill built in 1857 to power a flour mill located in Mishkenot Sha’ananim neighborhood. The first Jewish neighborhood was built in 1860 outside the walls of the Old City by Moses Montefiore, the English banker and philanthropist. The neighborhood and the windmill were built to provide employment and housing for the Jewish residents of Jerusalem, who were suffering from over-crowded conditions within the Old City. The Montefiore Windmill was recently restored in a Netherlands workshop, and placed in its original location, adjacent to Yemin Moshe, Liberty Bell Park and the First Station compound.

The Israel Museum is the largest cultural institution in the State of Israel and is ranked among the world’s leading art and archaeology museums. Founded in 1965, the museum houses encyclopedic collections, including works dating from prehistory to the present day in its Archaeology, Fine Arts, Jewish Art and Life Wings, and features the most extensive holdings of biblical and Holy Land archaeology in the world. In just forty-five years, thanks to a legacy of gifts and generous support from its circle of patrons worldwide, the Museum has built a far-ranging collection of nearly 500,000 objects, representing the full scope of world material culture.

A decade in the making, the Holocaust History Museum combines the best of Yad Vashem’s expertise, resources and state-of-the-art exhibits to take Holocaust remembrance well into the 21st century. The Holocaust History Museum occupies over 4,200 square meters, mainly underground. Both multidisciplinary and interdisciplinary, it presents the story of the Shoah from a unique Jewish perspective, emphasizing the experiences of the individual victims through original artifacts, survivor testimonies and personal possessions.

“Whoever did not see Jerusalem in its days of glory, never saw a beautiful city in their life.” – Talmud: Succah 51b

In a peaceful valley between mountains and hills, surrounded by the beauty of natural groves, nestles one of Jerusalem’s most picturesque neighborhoods. Ein Kerem is a charming artisan village in Jerusalem that is popular with local and oversea tourists. Boasting a wide selection of restaurants, art shops and attractions, Ein Kerem is a picturesque Jerusalem neighborhood.