8 Oldest Continuously Inhabited Cities You Should Visit One Day 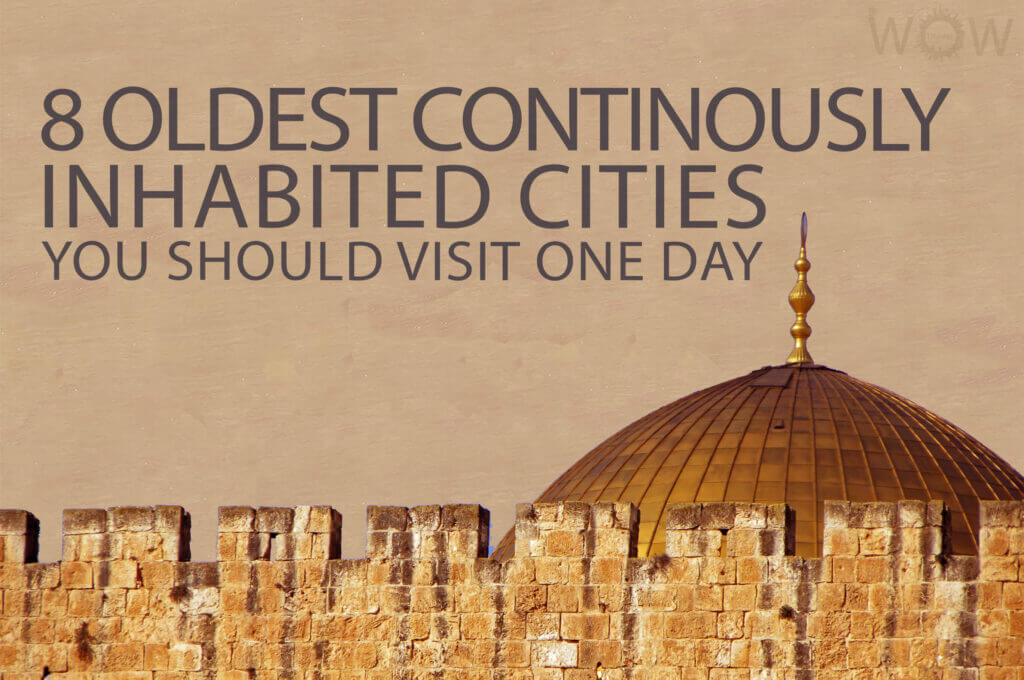 Most people say it is the people who live the cities that are the real attraction. However, cities themselves have much to offer or tell. Cities are like people, they all have a different personality. The most important is that every door, every street, square or park, they have all been witnesses to various moments that shaped society and made history. We have modern and rather young cities but we also have some who have existed for centuries. Here is a list of the 8 Oldest Continuously Inhabited Cities You Should Visit One Day.

Located in the Judaean Mountains between the Mediterranean Sea and the Dead Sea (the lowest point on earth) and surrounded on all sides by valleys. Jerusalem, the capital of Israel, is one of the most ancient cities in the world with an intriguing history that stretches back thousands of years combined with a bustling modern city. It is considered the holiest city in the world due to its importance to three of the world’s main religions; Judaism, Christianity, and Islam.

The capital and largest city of Lebanon as well as its cultural, administrative and economic center Beirut’s history stretches back around 5,000 years. Excavations in the city have unearthed Phoenician, Hellenistic, Roman, Arab and Ottoman remains, while it is mentioned in letters to the pharaoh of Egypt as early as the 14th century BC. Since the end of the Lebanese civil war, it has become a lively, modern tourist attraction. Source: wonderslist

Gaziantep, previously and still informally called Antep, is a city in the western part of Turkey. Dating back to the 4th millennium BC, Gaziantep has traces of Hittite settlement that continued till about 1183 when it was conquered by Turkish tribes. Till then it was predominantly a Syrian town named ‘Hamtap’.

The second-largest city in Bulgaria, Plovdiv was originally a Tracian settlement before becoming a major Roman city. Its unique location on these ancient crossroads has stimulated strong cultural and political influences from East and West civilizations, and yet maintained its unique cultural identity. Being older than most of the oldest towns like Rome, Athens, Carthage or Constantinople, an almost contemporary of Troy. Source: plovdivguide

Founded in the 3rd millennium B.C., Damascus is one of the oldest cities in the Middle East. In the Middle Ages, it was the centre of a flourishing craft industry, specializing in swords and lace. The city has some 125 monuments from different periods of its history – one of the most spectacular is the 8th-century Great Mosque of the Umayyads, built on the site of an Assyrian sanctuary. Source: unesco

Located 40 minutes ride from Beirut, Byblos is one of the most beautiful places in Lebanon. It is where The alphabet was created. The city’s key tourist sites include ancient Phoenician temples, Byblos Castle, St John the Baptist Church and the old Medieval City Wall. Modern archaeological excavations have revealed that Byblos was occupied at least by the Neolithic Period and that during the 4th millennium bc an extensive settlement developed there.

Jericho is thought to be the oldest continuously inhabited city in the world. Archaeologists have unearthed the remains of 20 successive settlements in Jericho, dating back 11,000 years. The city is found between Jerusalem the Jordan River and is today home to around 20,000 people. Jericho is also about the lowest city on earth. It is nearly 243 meters (800 ft) below sea level.