Top 10 Things To Do In Salamanca 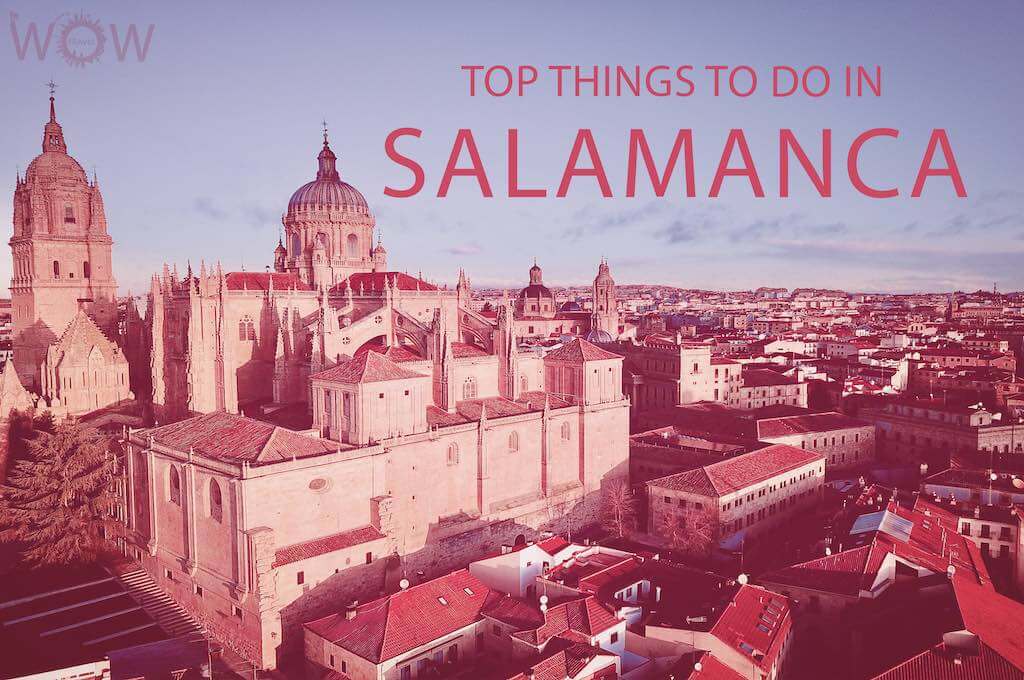 Perched on the hills of northwestern Spain, Salamanca is a feast for the eyes and soul. It’s home to stunning sandstone buildings, a lively arts and culture scene, and an indomitable nightlife. And as a university city since the 13th century, it isn’t surprising that Salamanca exudes an intellectual vibe. More than 180,000 people call Salamanca home. Yet despite its large population, the city projects an intimate and laid-back aura. A walk through the old city is a visual treat. You’ll see splendid cathedrals, university buildings, convents, and palaces. So, whether you’re planning a quick day trip from Madrid or a longer vacation, consider these top 10 things to do in Salamanca.

This is a beautiful, historic quarter that UNESCO has designated a World Heritage site. It’s a fantastic place to explore on foot since this is where you’ll find many of the top things to see in Salamanca. So, don’t forget to pack a pair of comfortable walking shoes! Explore the narrow, cobbled streets and you’ll discover amazing architecture and atmospheric plazas. Also, you can take your pick from any of the artsy cafes in the area and sip on an espresso while watching the street performers. Or browse through antique bookstores and medieval shops for souvenirs. Need a break? There are several quiet gardens where you can sit under the shade of leafy trees.

Salamanca’s central square teems with life almost all day and all night. Built-in the mid-18th century as a bullfighting venue under the orders of King Philip V, Plaza Mayor is the city’s heart and soul. People of all ages from near and far gather here, amid glorious Spanish baroque architecture. To the north is the City Hall while the Royal Pavilion lies on the east side. Lining its perimeter are many shops, bars, ice cream parlors, and restaurants. In addition, portrait medallions of famous historical figures such as El Cid, Miguel de Cervantes, and Saint Theresa are all around the plaza.

The University of Salamanca

Founded in 1218 by King Alfonso IX, the University of Salamanca is the Hispanic world’s oldest university. Modeled after the University of Bologna in Italy, it was a vital center of learning in medieval Europe. You’ll see many stately Baroque and Renaissance buildings here. For example, in the Patio de Escuelas courtyard, there’s the old University Library (Sala Calderón de la Barca) where you can see Fernando Gallego’s famous ceiling painting Sky of Salamanca. Nearby is the Museo de Salamanca, which occupies the 16th-century House of the Doctors of the Queen (Casa de los Doctores de la Reina). Look up and admire the ancient buildings’ intricate Plateresque ornamentation. Just as impressive are the carvings on the facades: busts of saints, royal coats of arms, medallions of mythical characters, and more.

Called the Catedral Vieja de Santa María in Spanish, the Old Cathedral of Salamanca traces its roots to the 12th century. By the 14th century, it saw completion as a Romanesque/Gothic architectural marvel. The main apse holds a magnificent reredos (ornamental screen) filled with paintings of Christ and the Virgin Mary. Meanwhile, Nicolás Florentino’s 15th-century fresco of the Last Judgment adorns the vaulting above the altarpiece. There are many other notable features that make the Old Cathedral a must-see in Salamanca. For example, there’s the Diocesan Museum, where you can see the works of artists such as Fernando Gallego and Juan de Flandes. Also within the cathedral’s premises are the imposing Torre del Gallo and the serene 12th-century cloister.

Construction started on the Catedral Nueva in the early 16th-century under architect Juan Gil de Hontañón. After two centuries, it finally saw completion by Alberto de Churriguera. The cathedral is a grandiose combination of Plateresque, Gothic, and Baroque architectural styles. Located mere steps from the Old Cathedral, this magnificent structure features a lofty domed tower and a Baroque choir. Its chapels contain artistic masterpieces such as an 11th-century crucifix. Another interesting thing about the New Cathedral of Salamanca is its facade. You’ll see carvings of an astronaut and a faun eating ice cream. These appeared courtesy of an artisan who was part of the restoration work on the cathedral in 1992.

More than 300 shells cling to the facade of Casa de las Conchas, a historical building dating from the late 15th to the early 16th centuries. The original owner, Rodrigo Maldonado de Talavera, was a University of Salamanca professor and a royal court doctor. He was also a knight of the Order of Santiago de Compostela, whose symbol was the shell. The facade of the house is a mixture of the Plateresque and late Gothic architectural styles. Aside from the shells, Gothic windows of different shapes and the coat of arms of Catholic monarchs are likewise prominent in the facade. Meanwhile, the Maldonado family’s coat of arms adorns the entrance portal. Since 1993, Casa de las Conchas has housed the Salamanca Public Library.

If bridges could talk, Salamanca’s Roman Bridge would have countless stories to tell. Historical research suggests that the bridge could be as old as 2,000 years, built during the reign of the Roman Emperor Trajan in the 1st century. It was a vital part of the Roman silver route. The bridge suffered through floods and wars over the centuries. Consequently, it has seen plenty of restorations too. The sheer weight of its historical significance has inspired artists such as David Roberts, Harry Fenn, and Gustave Doré. Today, visiting the Roman Bridge is one of the top 10 things to do in Salamanca. People stroll its length to admire views of the Tormes River and the city’s sandstone buildings.

A glimpse into Salamanca’s aristocratic history is what you’ll get at Monterrey Palace. Dating from the 16th century, the palace is a splendid example of Spanish Plateresque architecture. The building has amazing details, from loggias and grotesque carvings to soaring towers and chimneys. The Count of Monterrey was the palace’s original owner. Today, it belongs to the House of Alba, one of Spain’s aristocratic families. If you book one of the guided tours of the palace, you’ll be able to see its extravagant furnishings. For instance, paintings by the 17th-century Spanish painter José de Ribera grace the mansion’s walls.

Before La Glorieta’s opening in 1893, bullfights in Salamanca were held in other locations such as the Plaza de Mayor. Then a group of merchants commissioned architect Cecilio González Domingo to build the bullring. Classical in style, La Glorieta features three levels constructed from brick, wrought-iron, and stone. The stadium can accommodate upwards of 10,000 spectators. It can get packed in summer—the bullfight season—especially during the festival months of June and September. However, if bullfighting isn’t your thing, you can catch a concert or other events that are also held here.

The Convent of Saint Stephen is a Dominican monastery in Salamanca’s eastern section. Construction began in 1524, but it wasn’t completed until 1610. The facade enjoys renown as a stellar example of Plateresque architecture. However, the building features Gothic and late Baroque elements as well. Also, the Churrigueresque architectural style shows its presence here. The magnificent altarpiece, covered in gold, is a 1692 creation of architect and sculptor José de Churriguera. Perhaps just as breathtaking are the Cloister of the Kings, the elegant Soto Staircase, and the ornate sacristy.