Top 7 Things To Do In Bologna 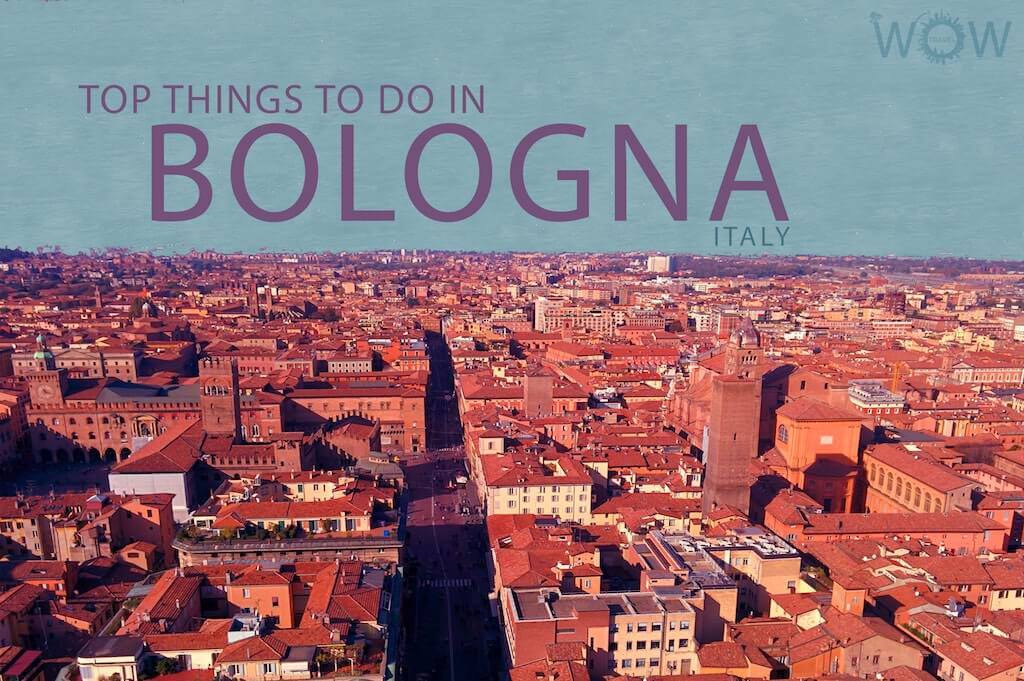 Bologna is a medieval town located in Emilia Romagna, a region in the north of Italy that is known for its ancient architecture, rich food, and the seaside. Bologna doesn’t have landmarks as grand as Rome’s, picturesque canals as beautiful as Venice’s, or the great artistic wealth flaunted in Florence, but it has its own charm and it is the perfect place to spend a weekend. Besides the famous medieval towers, elegant porticoes, great churches, Renaissance palaces and markets; Bologna is legendary for its traditional cuisine (tagliatelle al ragù and lasagne alla bolognese are just a few examples) and Ragu, otherwise known as bolognese sauce. Here is our list of the Top 7 Things To Do In Bologna.

Bologna is the “cultivated” one, the “red” one, because of the red-brown reflections due to the materials its buildings were built with, and the “fat” one, for its excellent cuisine.

Built at the end of the 11th century, Torre Asinelli is the symbol of Bologna along with the leaning Garisenda rising next to it. The Torre Garisenda was built in the same period as the Asinelli. It just a little bit over 48 meters (157 ft) tall , although it started out as more than 60 meters (196 ft) tall. However ground settlement led to such a dramatic leaning that in the 14th century it was cut off for safety reasons. So it turns out that Pisa is not the only place with a leaning tower. Climb the twisting staircase of Torre Asinelli, from the top of the tower you can admire a breathtaking view of Bologna.

Piazza Santo Stefano is one of the most peculiar places in Bologna. Even though it is mainly considered as a square, it is not properly this: Via Santo Stefano widens to create this peculiar area that leads to the monumental group of buildings named after the same Saint. From Piazza Santo Stefano the ancient road to Tuscany may be taken. This group of churches is mainly known as “seven churches” as it is formed by seven holy buildings built and renovated during different periods, mainly on behalf of the patron Saint of Bologna, St. Petronio. Apart from giving prominence to these churches, the square allows visitors to see the beautiful buildings surrounding it: on the left side Casa Berti, whose frescoes were made by Gaetano Gandolfi, Palazzo Isolani and the 15th century Palazzo Bolognini Isolani that hosts Corte Isolani, a court that leads directly to Strada Maggiore; on the right side, the 16th century Palazzo Bolognini Amorini Salina. At present, the square is often used to host cultural events and concerts. Source: bolognawelcome

Framed by Piazza Maggiore, via Rizzoli, Via Castiglione and via Farini, Quadrilatero (literally quadrilateral) is the heart of Bologna and one of the most ancient areas of the city, born for the development of handicraft and trade. Here you will find every specialty that Bologna has to offer. From the many fresh vegetables stands to butchers, fishmongers and cheese shops to delightful coffee shops and little eateries. Quadrilatero is where antiquity and modernity perfectly blend together and gastronomy shopping has never been so fantastic.

Sanctuary of the Madonna of San Luca

The Sanctuary of the Madonna of San Luca is a basilica church sited atop Monte della Guardia, in a forested hill just south west of Bologna. Many pilgrims walk all the way up to the top of the hill from the center of Bologna. The entire 3.8 km (2.7 miles) path is covered by a porch made of 666 arches. From this hill-top sanctuary you can have a great view on the city and it is visible on a clear day from most parts of Bologna.

This oldest university in the Western world was founded in 1088. Make sure to see the Archiginnasio, a two-story building that was the original seat of the university; Teatro Anatomico where corpses were first dissected in studies of the human body; and the library which houses 500,000 texts and 12,000 manuscripts.

The people of Bologna have been gathering on the Piazza Maggiore for centuries. This large square in the heart of the city is surrounded by beautiful medieval buildings like the Palazzo del Podestà, Pallazo d’Accursio and, of course, the giant Basilica of San Petronio with its unfinished grey façade..

Basilica di San Petronio is the largest and most important church in Bologna. It is 132 meters (433 ft) in length and a height of 47 meters (154 ft). The massive church honoring Bologna’s patron, the 5th-century bishop Petronio, was begun in 1390 and designed to be larger than St. Peter’s in Rome but it was actually never completed.

“Bologna is the best city in Italy for food and has the least number of tourists. With its medieval beauty, it has it all” Mario Batali