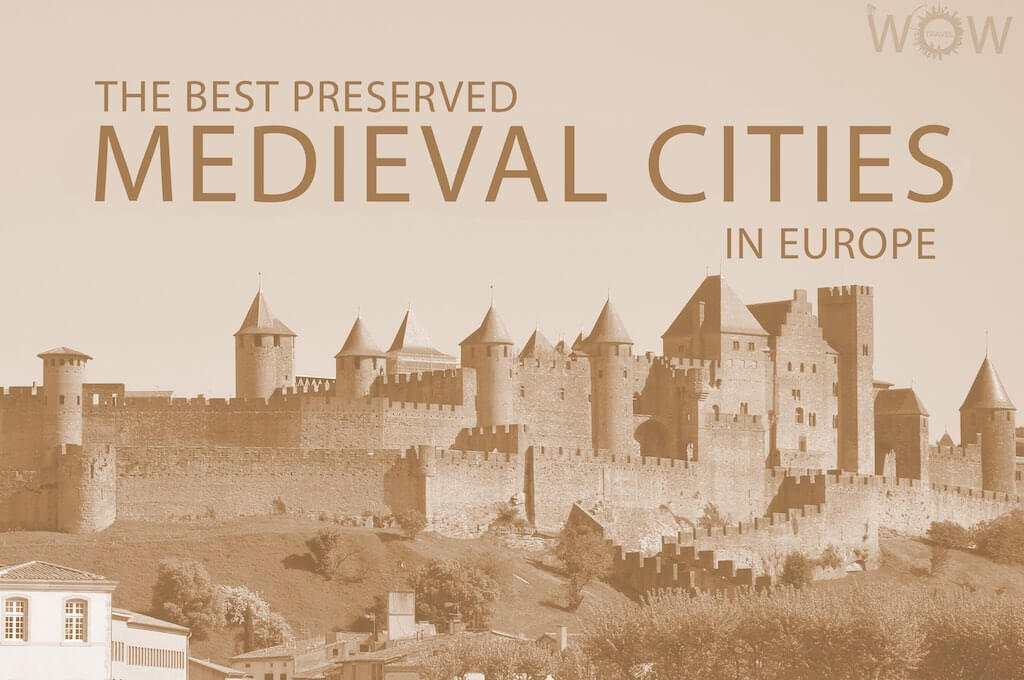 The most mysterious European era is none other than the Middle Ages, thanks to the diversified events which marked significant changes in the course of Europe’s fate, culminating in what we today know as Renaissance and Reformation. Starting from the time of the downfall of the Roman Empire, the Middle Ages have been always considered to be both a glorious and darkest time for various countries. Even though this glorious historic era ended around the 15th century, many countries have still preserved the roots, like the high walled cities, medieval castles, gothic churches and so on. Not only this, but even the folkloric tales are also cherished till date like the stories of Robin Hood, Braveheart, Slavic and Scandinavian stories and so on. Starting from England to Germany, most of the European countries have preserved the pride of the medieval cities like York, Sienna, Venice, and so on. So, let’s have a glance at the best twelve European cities which have still protected the roots of their history and culture.

This Scottish town is one of the most famous medieval cities in Europe, thanks to the royal castles dating back to 1100 and the famous folklore tales of Braveheart. The famous Edinburgh castle will make you marvel at its artistic beauty. Another 14th-century structure is the St Giles’ Cathedral which is the major attraction of Edinburgh.

Siena is the house of medieval beauty, thanks to the impressive structures which will remind you of both the Middle Ages and the Renaissance. Palazzo Pubblico is still one of the most visited places in Siena followed by the Cathedral and the Tower of the Eater. The main focus of Siena is lying in the Piazza del Campo, the medieval square with a horse race ground. The city has a plethora of castles, including the Castello di Barone Ricasoli which was built in 1141.

Prague in the Czech Republic

Prague is one of the most beautiful medieval towns in Europe, thanks to the central city castle standing proudly in the middle of the town, the numerous watchtowers scattered in the city. The cobblestone pathways through the old town are lit with a wonderful golden hue of the lamps in the evening, making the ambiance warm and inviting

Rothenburg village is perhaps the most eccentric preserved medieval cities in Europe, thanks to the high city walls bordering the village now. The tranquility of the city lies in the narrow cobblestone pathways, the timber houses, the various city gates which once used to grant access to others, and the watchman tower are some of the elements which will teleport you directly to the old times.

Started in 100BC by the Romans, the structures and fortifications in Carcassonne were completed in the medieval age. The Cathar castle was built in the 12th century, which is one of the main sites of attraction besides the main Carcassonne castle. Other popular medieval attractions of the city are Saint Nazaire Basilica, La Bastide Saint Louis, and the old bridge or Le Pont Vieux. Can’t get enough of the view? Stay at one of the 11 Best Hotels in Carcassonne.

It is almost an untouched property, with stone walls and cobblestone paths dating back to the medieval period. The beauty of this French town is inexplicable, such that late Marc Chagall lived here for many years. Wineries and terraced cliffs are the main attractions of the city. Planning to visit? Make sure to stay at one of the 11 Best Hotels in Saint Paul De Vence.

The medieval city wall, which makes York one of the rarest gems of England, was built in 300AD by Roman Emperor, Constantius Chlorus. In York, the cobblestone paths are known as gates while the actual ‘city gates’ are known as bars. The houses along these paths date back to the 14th and 15th centuries. York will give you a small glimpse in the famous folklore

This Estonian capital is the hidden European gem, having the essence of the medieval period still lingering in the air. The Tallinn old town will take you back to the 13th century when it was built. The Town Hall in the central city is the major attraction as it was built in 1322, followed by the numerous city towers, St. Olav’s Church, St. Alexander Nevsky Cathedral.

Housing the most famous Kaiserburg Castle from 1050AD, Nuremberg is one of the most beautiful medieval towns in Germany. The city walls and the watchtowers will give you that old city vibe, which will fill you with sheer excitement. There is a medieval dungeon from the 1300s with twelve underground cells. Planning to visit? Make sure to stay at one of the 11 Best Hotels in Nuremberg.

Eze is known as the ‘City Medievale’, meaning that it is the heart of the medieval era in France, even though this city is quite small in size. The old passage gives you the feeling of walking into the old Centenaire Palace, just like the medieval times

Though located in Greece, this island Rhodes has Roman influenced architectures, including the high city walls and the statues. Home of St John, the knight’s leader, the Palace of Grand Master of the Order is one of the best places to visit. Apart from this, you can visit the Agia Triada Church, the medieval clock tower.

Avila in Spain is one of the impeccable medieval picturesque in Europe, thanks to the nine humongous city gates, 40 ft tall city wall, and more than a hundred drum towers. When you visit, we recommend staying at one of the 11 Best Hotels in Avila.