Top 12 Things To Do In Rhodes 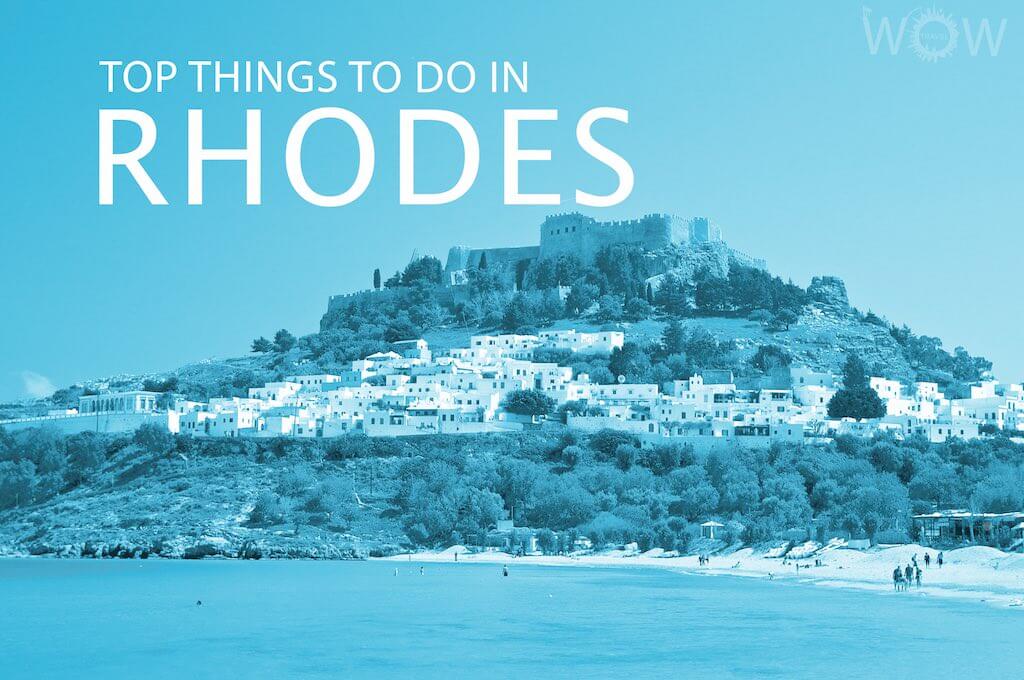 The Greek island of Rhodes is the largest and most historically important of the Dodecanese islands. The historical city of Rhodes (Rodos) is located on the northern tip of Rhodes Island. The city is distinctly divided into the ancient and the modern. It’s easy to see the clear demarcation of the town as the Medieval Old Town, a World Heritage Site, lies behind a double set of soaring walls. The narrow cobbled streets and squares of the Old Town will transport you back into the Byzantine era. Rhodes has seen a variety of dynasties take over through the centuries. From the Greeks to the Knights of St. John, Ottoman Turks and Italians, each one has left its distinct mark on the town. You’ll never be at a loss for things to do at this beautiful location which has the best mix of both worlds.
[booking_product_helper shortname=”rhodes”]

Palace of the Grandmasters

Located at the highest point of the Old Town this medieval castle was built in the late 7th century as a Byzantine citadel. It was later converted into the palace of the Grand Master by the Knights Hospitaller (The Knights of Saint John) and occupied by them till the late 15th century. The palace was later used by the Turks as a command centre and fortress. An ammunition explosion in 1856 destroyed many of the rooms on the first floor. The damaged parts were later restored when the Italians took over the island. It was then used as a holiday residence for Italian King Emmanuel III and then by the Fascist dictator Mussolini. Today, only 24 of the 158 rooms are open to visitors.

You can walk around the ramparts of the old town walls which were built by the Knights Hospitaller. They enhanced the existing Byzantine walls to fortify the city, finishing the work between 1457 and 1465. When the Ottomans finally defeated the Knights in 1522, instead of demolishing the walls they repaired them and maintained them for four centuries. The walls are a walk through history as you take in the magnificent gates, imposing towers and a dry moat.

Lindos is a popular holiday destination situated on the island of Rhodes about 50 km south of Rhodes Town. Besides the beautiful beaches that attract so many tourists, Lindos is renowned for its ancient ruins. The Acropolis of Lindos is situated above the modern town, overlooking the sea. A steep footpath leads to the beautifully preserved Acropolis, situated at the top of a 116-meter high rock. Ancient remains of a Temple to Athena Lindia dating from about 300 BC, and a Hellenistic stoa of 20 columns dating from 200 BC will leave the history buff quite amazed. There are ruins of several other historical monuments like the Castle of the Knights of Saint John and a Greek Orthodox Church.

Street of the Knights

The street which is about 600 meters long connects the Palace of the Grand Masters to the Hospital of the Knights. Along the cobbled Street of the Knights, you’ll find many stone buildings and Gothic arches. This is where the knights resided, in ‘Inns’ for each ‘tongue.’ Tongues were basically the languages that were associated with the region from where the knights originated. There were seven tongues in all with their own ‘Inn.’ England, France, Germany, Italy, Aragon, Auvergne and Provence were the tongues.

About a 20-minute drive from Rhodes town you’ll find the Petaloudes, better known as the Valley of Butterflies. By the end of May after the wet season, thousands of moths – a subspecies of the Jersey Tiger Moth cover the entire landscape. The moths are attracted to the scent of the Oriental Sweetgum trees in the Petaloudes Valley. Even off season when the moths are not visible, Petaloudes is a beautiful place to visit with streams, forest paths and natural pools.

For a stunning view of Rhodes, a climb to the top of the Roloi Clock Tower should be on your cards. This 7th-century clock tower was rebuilt with baroque elements after it was damaged in an explosion in 1856. Visitors recommend visiting the tower early morning or in the late afternoon.

The thermal springs of Kallithea are located 9 km from Rhodes Town at the bay of Kallithea. The opulent art deco spa was constructed in 1929 on the site of ancient thermal springs. The thermal springs renowned for their therapeutic properties have attracted visitors since antiquity. The dazzling white domed pavilions designed by Italian architect Pietro Lombardi have been recently restored after years of neglect. During peak season the springs can get very crowded.

Three disused windmills stand out prominently at the ancient Mandraki Harbor which dates back to 408 BC. The harbor was presumably the site for the Colossus of Rhodes, one of the Seven Wonders of the Ancient World. Today, two stone columns topped by bronze figures of a doe and a stag flank the entrance to the harbor. You can take an excursion to the nearby islands from the port or walk to the historic 15th century Fort of Saint Nicholas located here. The tower of the fort was built between 1464 and 1467 to the guard the military harbor whilst the bastion was added in 1480, after the siege of Rhodes.

The Mosque of Suleyman

When the Ottomans captured Rhodes many churches were converted into mosques. However, many mosques were also constructed during the time, the most prominent being the Mosque of Süleyman. The pink-domed mosque was built in 1522 to commemorate the Ottoman victory against the Knights. The mosque is now a museum which can be visited on specific days.

The Church of Evangelismos is near Mandraki Harbor. The church was built in 1925 during the Italian occupation of Rhodes. The church is a fine example of Gothic architecture with decorative elements carved from local sandstone. The church which is dedicated to St. John has some beautiful Byzantine murals in its interior.

The Kahal Shalom Synagogue is the oldest synagogue in Greece. Built in 1577, the Sephardic synagogue was once frequented by many Jews. As recently as 1920, there were about 4000 Jews living in the Jewish Quarter (La Juderia) of Rhodes Old Town. Kahal Shalom was the only synagogue in La Juderia out of four, to escape the bombs of the Second World War. You will find much of the history of the Jews of Rhodes at the adjoining Jewish Synagogue Museum. Since there are very few Jews left in Rhodes, services are only held on holidays.

This beach is extremely popular as it is the closest beach to Rhodes Town located between the Mandraki harbor and the Rhodes Aquarium in the New Town. The beach is filled with colorful umbrellas and sundecks that you can rent. The restaurants and taverns that line the beach are great places to enjoy the local cuisine. You could also try your hand at some watersports or go diving.