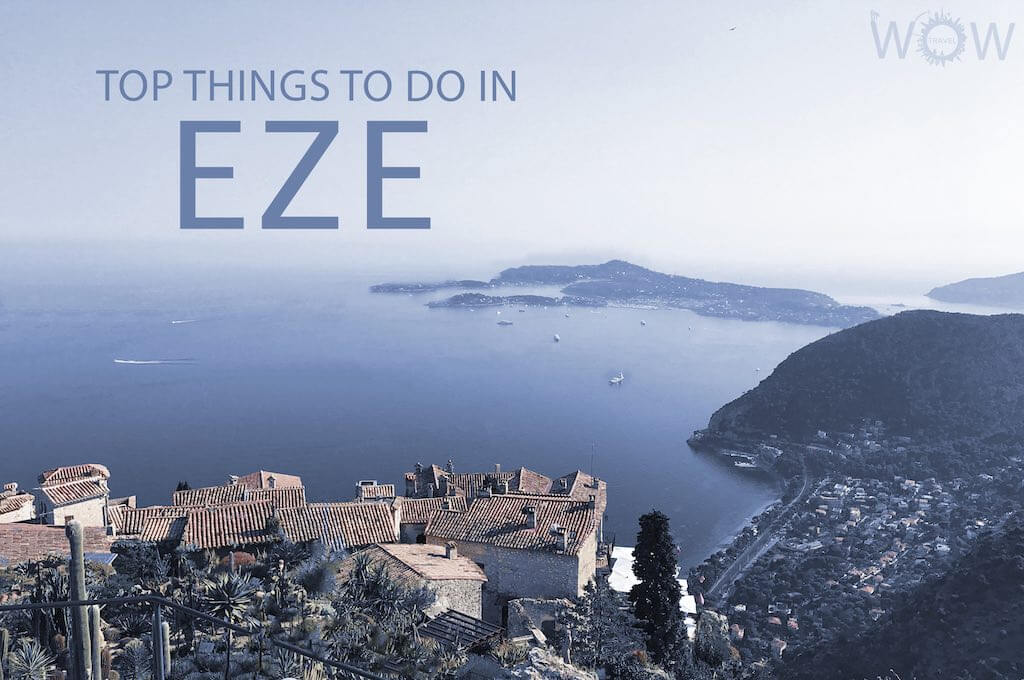 The French commune of Eze is located between Nice and Monaco on the French Riviera. It is easily accessible from either city, and a bus or train ride is generally the best way to visit. The medieval village of Eze sits like an eagle’s nest at a height of 427 meters from the sea, on the top of a hill. The village was once fortified by walls when it was under the jurisdiction of the House of Savoy because of its proximity to Nice. The walls were later torn down on instructions from Louis XIV in 1706, during the War of Succession. The ruins of the castle located at the highest point are a poignant reminder of an era gone by. In contrast to the medieval village on the hill, is the seaside town of Eze-sur-Mer. The train station, beach, and hotels are located in this part. If you are visiting Monaco or Nice, the commune of Eze should definitely be on your itinerary.

The old village of Eze is quite a marvel in itself. Perched on the top of the mountain, it must have been a tremendous effort to build the village. The medieval village with its narrow meandering streets is worth the effort of the climb. Once at the top, the spectacular views will take your breath away. Numerous shops, restaurants, and bars are built into the walls. However, some of them can be quite pricey.

This exotic garden located on the slopes of Eze will give you a stunning panoramic view of the coast below and the beautiful Cote d’Azur. Created after World War II by town mayor André Gianton and Jean Gastaud, the Jardin Exotique d’Eze has a beautiful collection of cacti and succulents from the Mediterranean region, the Americas and Africa. The garden is also adorned by a number of statues by Jean-Phillipe Richard.

Church of Our Lady of Assumption

This neoclassical church dedicated to Our Lady of the Assumption was built in the 18th century. The iconic yellow church was built to replace an earlier church which fell into ruins. The classical façade of the church is quite a contrast to its beautiful Baroque interior. There are some beautiful paintings on the walls and the ceilings but the church itself is badly in need of repair.

The ruins of the Eze fortress are located at the summit of the exotic garden. They are a reminder of a bygone era when Eze was a place of importance. Constructed in the second half of the 12th century by the Lords of Eze, the fortress later passed into the hands of the Counts of Provence and then the Dukes of Savoy. Soldiers called ‘Castellans’ were posted at the fortress castle for a year. These soldiers were responsible for the protection and upkeep of the castle. In 1706 the fortress castle was destroyed by Louis XIV during the Spanish Wars. There’s not much left of the castle, but the view from the top is spectacular.

The trail to the top or down from Eze village is named after Friedrich Neitzche who stayed for a little over a year in Eze. He is said to have found the third Zarathustra on his walk up the trail to the village. You could either take this path while walking up to the village or going down from the Jardin Exotique Gardens. The path begins near the Eze train station and leads all the way up to the village. It is a moderately difficult path but is quite doable even for an inexperienced hiker. The views along the path are quite stunning. Although the climb or descent takes about an hour, you may take a little longer as you stop to rest or click some beautiful photos. A word of advice is to wear good sturdy shoes and make sure you carry drinking water.

Fort de la Revere, built in 1870, is located just below Eze in a regional park at the top of the mountain. Although the fort is closed to the public, the view from the area is fantastic. The place is highly recommended for the stunning 360-degree views of the entire surrounding. There are quite a few hiking trails which you can also take to soak in the stunning views. The area around the fort is popular with locals as a picnic spot as there are plenty of picnic tables around the park.

Villa Ephrussi de Rothschild is located about 17 km away from Eze in Saint-Jean-Cap-Ferrat. Constructed between 1905 and 1912, the Villa Ephrussi which is a listed building is one of the few residences that are open to the public. The beautiful villa with its works of art and various gardens is definitely worth a visit. There are nine gardens in all at the villa, which are classified as one of the Notable Gardens of France. A Japanese garden and an exotic garden are some of the gardens you would expect to find here. Once a year in the month of June, the villa has ‘The Painters’ Day.’ On this day artists are invited to practice their art in any of the nine gardens.

Trophee des Alpes or Trophy of Augustus is hardly a 10-minute drive from Eze, located in the medieval town of La Turbie. The colossal trophy was erected to celebrate the Emperor Augustus’ victory over the Alpine tribes in 6 BC. The original structure was said to have been 49 meters in height with a base that measured 35 meters in length. The Trophy was partially destroyed during the War of Spanish Succession when Louis XIV ordered that all fortresses in the area be destroyed. The Trophy then fell into ruin and its stones pillaged to build the nearby church. In 1929 the monument was partially restored with funds from Edward Tuck in whose honor the museum at the site now stands. Today, the monument is still an imposing structure, standing at a height of 35 meters.

About 8 km away in Beaulieu-sur-Mer is another beautiful villa – Villa Kerylos, built in the early 1900s. This villa too belonged to a member of the Ephrussi family and was the inspiration behind Villa Ephrusi de Rothschild. Built by French archaeologist Theodore Reinach, the house was modeled around the ancient Greek villas. He aimed to replicate the ancient Greek noble houses in a modern building. The building took 6 years to complete in order to incorporate all the finer details. The property was bequeathed to the Institut de France after Reinach’s death in 1928, although his children continued to live there till 1967. The villa is now a museum.

You cannot miss the imposing Chateau Eza as you make your way through the stone city. Located right at the heart of the old village, the chateau was built four centuries ago. Chateau Eza was once the private winter residence of Prince William of Sweden. The Castle of the Prince of Sweden fell into decline by the mid-20th century but was restored by Andre Rochat who owned the place till 1993. The Chateau Eza is now one of the 11 Best Hotels in Eze with a Michelin star restaurant, offering some stunning views. On similar lines is the Chateau de Chevre d’or that once belonged to Yugoslav violinist Zlato Balokovic. The chateau officially became a hotel in 1960. The hotel with its beautiful garden, breathtaking views and two Michelin star restaurant attracts celebrities from all over.

If you’re an aficionado of perfume then you should definitely head to the perfume factory Parfumerie Fragonard L‘Usine Laboratoire. The factory was founded in 1926 and named after painter Jean-Honore Fragonard. The 30-minute free guided tour will give you a great insight into the making of various perfumes and cosmetics. The tour ends at the gift shop where you may be tempted to pick up a thing or two. At the gift shop, you’ll also learn the differences between parfum, eau de parfum, and eau de toilette. Another activity of interest for many visitors to the factory is the paid Lamborghini tour that begins at the factory. Whizz away in your dream car for a 15-minute or longer ride.

There is only one beach in Eze-Sur-Mer but it’s a great beach for swimming. Since it is a public beach you’ll find some decent facilities like toilets and showers. There are two restaurants on the beach – the sophisticated Papaya Beach and the more relaxed Anjuna Bay. The restaurants have their own sun loungers and parasols which you can hire for the day. Halfway along the beach, you’ll also find the Club Nautique which offers kayaking, scuba diving, and sailing.