Top 12 Things To Do In York 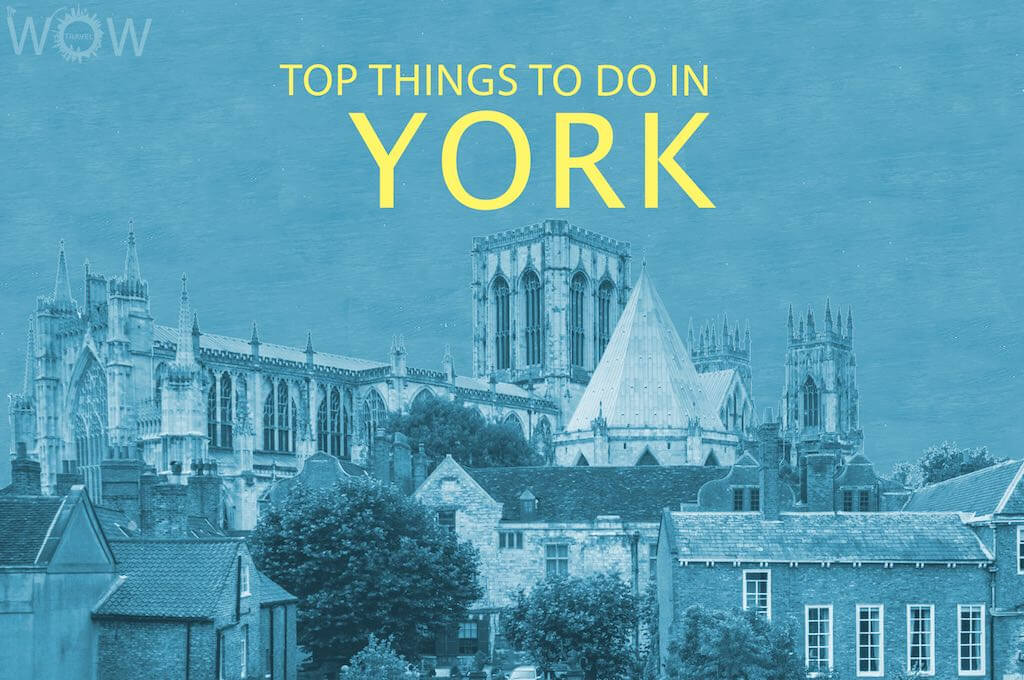 York, a city located in North Yorkshire, England is famous for its historical landmarks and variety of cultural and sporting activities. Founded as Eboracum by the Romans in 71 AD, some of its Roman heritage is evident in parts of the medieval wall which is still quite intact. With the conquest by the Danes in 866, the city was then known as Jorvik which gradually reduced to York by the 13th century. There is a lot to see and experience in York, which was voted as the European Tourism City of the Year in 2007. In 2018, it was deemed as being the ‘Best Place to Live,’ in Britain by the Sunday Times.
[booking_product_helper shortname=”york”]

The term minster is given to churches that were established during the Anglo-Saxon period. The cathedral of York is an imposing building dedicated to Saint Peter, which is the seat of the Archbishop of York. Built in the 13th century, the York Minster is built in the Gothic style, evident in the beautiful wide nave. The stained glass windows are quite spectacular, especially the Pilgrimage Window which dates back to 1312. During the English Reformation, much of the cathedral’s treasures were looted as every effort was made to remove any trace of Roman Catholicism from the cathedral. As such, windows, tombs and altars were destroyed. The cathedral underwent a massive renovation which was completed in 2018. For a spectacular view of the city, the adventurous can climb to the top of the medieval Central Tower.

This is the oldest remaining part of York Castle which was built by the Normans. The first castle on the same site was built in 1068 after the Norman conquest of York. It was later destroyed by rebels and a Viking army but rebuilt in 1069. The original castle was made of wood and then rebuilt in stone by Henry III in the middle of the 13th century. Clifford’s Tower also referred to as the ‘keep’ of the castle was named after the leader of the Lancastrian party, Roger de Clifford. The tower has an infamous past of being a dreaded prison and also the site where the king displayed the remains of those that were executed. Today, you can avail of some stunning views from the ruins.

These medieval walls date back to the 12th- 14th century. A large portion of the walls is still intact, making the walls of York one of the most intact in all of England. The original walls were built by the Romans around 71 AD and occupied about 50 acres near the banks of the River Ouse. These original walls are still visible in certain parts, like a section in the Museum Gardens, as well as the north-west and north-east sections between Bootham Bar and Monk Bar. The Bars make up two of the four well-preserved gatehouses of the walls. Walmgate Bar and Micklegate Bar are the other two. You can also experience the lives of England’s best known medieval knights at the Monk Bar and Micklegate Bar.

The museum stands on the site that was once York Castle. Founded in 1938 by John L Kirk York, the Castle Museum is housed in the prison buildings of the former castle. York Castle was originally built by William the Conqueror in 1068. Today, the museum gives visitors a wonderful insight into the English way of life through the centuries. Some of the highlights of the museum include a recreation of a Victorian street, Kirkgate, and The Cells, in the old prison. You can also check the museum’s database of former victims and prisoners.

Shambles is one of the most popular attractions for visitors to York. This 14th-century thoroughfare will make you feel like you’ve stepped back in time. The overhanging timber-framed buildings are picture worthy. In the past, it was known as the ‘The Great Flesh Shambles’ due to the number of butcher shops and stalls that used to dominate the area. The term probably originated from the Anglo-Saxon word ‘Fleshammels.’ Till the end of the 19th century there were at least twenty-five butcher shops still operational, but today none remain. Restaurants, tearoom, boutiques, and shops now cover the area. At the Shambles you’ll also come across five fascinating Snickelways. These small streets and winding footpaths were so named by author Mark W. Jones.

About 24 km north of York is the private residence and home of the Carlisle branch of the house of Howard. The stately home is a not a true castle, but this beautiful estate furnished with treasures and antiquities would rival any castle of today. You can marvel at the paintings, carvings, and furniture as you explore the interiors of the castle that took over 100 years to complete. Surrounded by 1000 acres of parkland and sitting amidst beautiful gardens, Castle Howard is truly a sight to behold. The castle has featured in various films and television series.

The National Railway Museum is a fascinating place to journey back in time. Covering an extensive 20 acres, there is a lot to see and discover about the railways of Great Britain. The impressive display of over 100 locomotives have carriages that date from 1820 to the modern day. A collection of Royal Trains including carriages used by Queen Victoria stands proudly in the museum, which has won a number of accolades for its beautiful collection. The museum which was established on its present site in 1975 attracts a large number of visitors.

Between 1976 and 1981, extensive excavations that were carried out by the York Archaeological Trust at the site of the Cravens factory in Coppergate, unearthed some interesting finds. Remains of the Viking city of Jorvik saw the light of day after being buried for centuries. Workshops, animal pens, fences, remains of timber buildings and wells were some of the things that were discovered. The trust recreated the excavated part of the site at the Jorvik Viking Center which was opened in 1984. Lifelike mannequins, reconstructed Viking dwellings, and medieval workshops are part of the interesting ‘Time Warp’ experience that the center offers.

If architecture fascinates you, a visit to Goddard House and Garden should be on your itinerary. This Arts and Crafts house was built in 1927 for Noel and Kathleen Terry the famous chocolatiers. Goddards House was the last major project of renowned architect Walter Brierley who died whilst the house was still under construction. The vaulted ceiling in the drawing room is a notable architectural feature. The property was acquired by the National Trust in 1984 to be used as regional offices. Today, the garden and parts of the house are open to visitors. The story of the Terry family and their confectionary business are showcased through displays.

These extensive gardens spread over an area of 10 acres in the heart of the city are a great place to unwind. The gardens are renowned for the historic buildings that occupy a prime place in its environs. The ruins of St. Mary’s Abbey and other historic buildings such as the remains of the Roman fort of Eboracum stand out prominently. The Anglian Tower is another historical monument that is a part of the garden. Besides the historical buildings, the gardens are also home to a number of plants, trees, and birds. A variety of events are held at the gardens such as open-air theatre performances and festivals.

This reconstructed townhouse museum was originally inhabited by monks of the Nostell Priory in the 14th century. The priory was used by monks as a townhouse or hospice when they visited the city but by the mid-15th century, the priory fell on hard times. During the Dissolution of the Monasteries, the townhouse was closed. By the 20th century, the building had fallen into such disrepair that a decision to demolish it was taken. However, the discovery of its medieval architecture in 1980 stopped the proceedings. It later became the property of the York Archaeological Trust who proposed reconstructing the place into a medieval museum. The museum was named Barley Hall in honor of the trust’s chairman, Professor Maurice Barley.

The riverbanks of the River Ouse are a great way to discover more of York. The riverside architecture which includes the majestic 15th –century Guildhall and the beautiful gardens are worth exploring. Alternately, you could also take a cruise down the river in a self-drive motorboat or an all-weather passenger boat to take in the sights of the city.