Top 12 Things To Do In Carcassonne 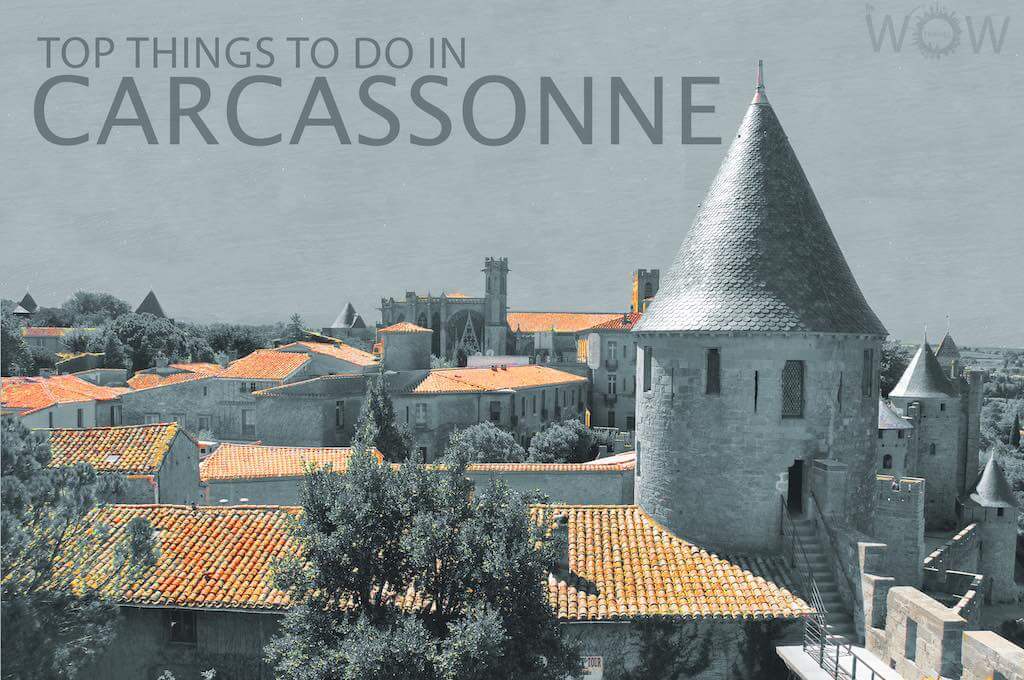 Carcassonne in France is the largest citadel in Europe that was fortified by the Romans. This citadel is located between the Mediterranean Sea and Toulouse and happens to be one of the major tourist spots, especially among the connoisseurs of history. It is the astounding walls of Carcassonne’s citadel which protected the city for centuries and the same were left to decay. It was in the 19th century that a full restoration of this citadel was done by the architect Eugene Villlet-le-Duc. Here are the top 12 things to do in Carcassonne.

St. Vincent’s Church is one of the major tourist spots of Carcassonne and if you are game for climbing the top of the tower of this church, you will see yourself reach the summit of the city. You can catch a glimpse of some of the most breathtaking views of the citadel from the top. This church is known to be a great example of Languedoc Gothic. This church entertains free access.

Chateau Comtal was built in the 12th century and this place happens to be one of the most famous tourist spots of the citadel. This chateau permits you to admire its beautiful bastions and towers, and you can also explore the amazing secret passages as well as places from where the soldiers indulged themselves in throwing hot oil down the walls upon the arrival of the enemies. This attraction of citadel is surely going to give you an insight into the Middle Age.

The Jacobin Gate is yet another tourist spot of Carcassonne and one of the places that you must visit while touring the citadel. This gate is located at the south end of the backside of St. Louis. This gate is known to be the only gate out of all the four main gates of the walls, which has survived even today. Thus, this factor makes this gate a famous tourist spot. The Jacobin Gate was originally built in 1365 and the same was rebuilt in 1779

The School Museum of Carcassonne is located in a former school in the old city. The most amusing thing about this museum is that it captures the school life of France between the 1880s and 1960s. Thus, you can actually view what the schools looked like in the old times in France. The museum gives you five different rooms to navigate. Each of the rooms has its own furniture as well as vintage teaching accessories.

This beautiful lake is situated nearby the city of Carcassonne. This brings you closer to the beauty of nature and is a great indulgence for all nature lovers. You can enjoy a walk around this lake. There are beautiful landscapes around the lake. The lake also has different beach areas near it where you can sit in peace and enjoy a variety of water activities in the summer months. You can take a bus from Carcassonne to reach this spot.

Museum of the Inquisition

Strict warning – this museum is not for the younger minds and thus if you are touring the city with your family and small kids, it is recommended not to let your kids explore the museum of the Inquisition. There are some sad-looking mannequins in the museum that expose some of the most eye-watering inventive methods and tools which were used for torture in the Revolution during the medieval times. The museum of the Inquisition is not for the faint-hearted.

The Black mountains rear up at the back of this beautiful village of Caunes-Minervois which is located towards the north of Carcassonne. This place is all about the beautiful surroundings with rustic stone walls, beautiful vineyards as well as olive groves. This one is a medieval village that was founded in the 700s and hence remains as one major tourist spot. The village is built around an abbey. The whole setting of the building reflects the modest Roman style.

Narbonne is located east of Carcassonne and happens to be a famous tourist spot. In the Roman Gaul, Narbo served as an important port on the Aude River. However, among a number of misfortunes that devastated the city in the coming time was the changing course of Ausde and the silting up of this harbor. Today, this is nothing but a monument that gathers a great footfall of all the tourists around the world. Apart from Narbonne, the Archbishop’s Palace is one of the greatest visits while you are touring to Carcassonne.

This one is known to be an extraordinary work of Pierre-Paul Riquet. This canal was dug in the 17th century and helped to connect the Atlantic as well as Mediterranean costs. This canal passes through Carcassonne just northern of the Lower Town. The leg in between the city and Mediterranean town of Sete is known to be the most gorgeous of all. Canal du Midi is all about the beautiful and pleasant views which are surely going to steal your heart.

This Museum of Fine Arts of the city was first established in the year 1836. This beautiful museum is nothing but a treat for all the tourists as it provides them with an enlightening journey via French art from the 1600s and 1900s respectively. This museum has eight different galleries, each of which comes with a display of some of the most exclusive French remains. The museum also has a telescope which was used by Napoleon post departing Elba in the year 1815.

Basilica of Saints Nazarius and Celsus

This is a church that was built over several hundred years from the 800s to the 1300s respectively. The feature of its Romanesque and Gothic design is something that makes it a piece of art as well as a fine tourist attraction. You can witness a good sense of harmony inside the church as the interiors clearly speak for the same. The long central stained glass window in the choir is from 1280 and the same is considered to be the oldest.

The statue of the legendary heroine of the city, Lady Carkass stands in front of the drawbridge of Carcassonne. The lady was the wife of Saracen king Balaak. The original statue of Lady Carkass dates back to the 16th century. Today, this has preserved itself in the form of a castle. There are a number of shops around this statue that sell shortbreads with the name of Friandises de Dame Carcas in the honor of the legendary heroine. Save to Wishlist. One of the museum’s eight galleries is also dedicated to Flemish and Dutch art from the 1600s.