12 Small Towns In France Worth Visiting 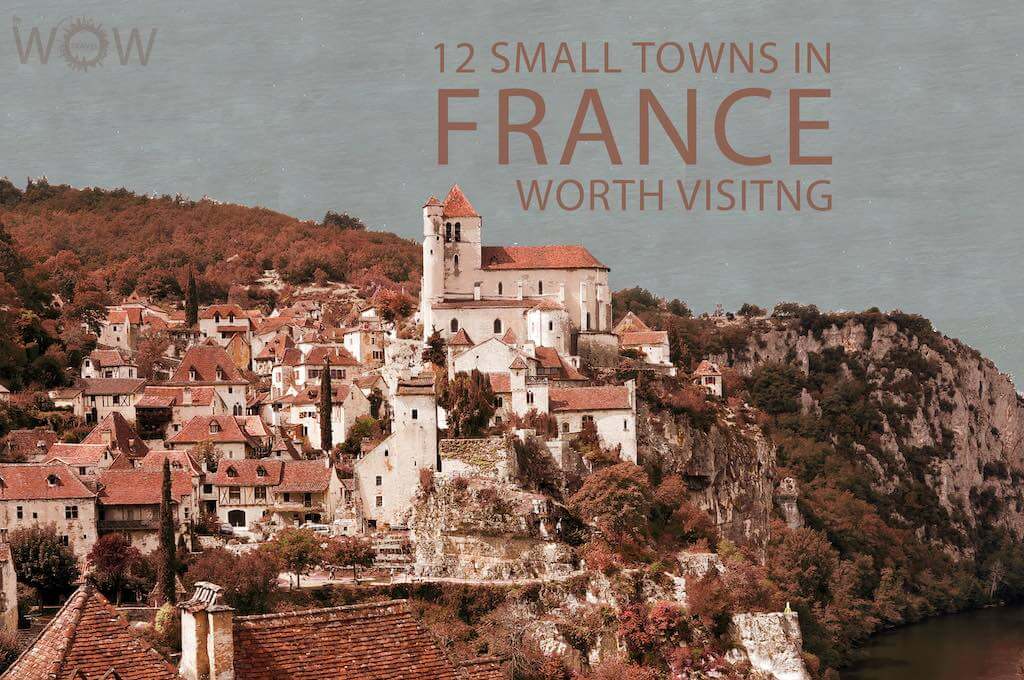 Mention France and the first image that comes to mind is Paris, the Eiffel Tower or the Louvre. France with its rich history and culture is one of the most visited countries in the world. Throughout history, people have traversed their lands seeking art, culture, geographical diversity or to simply enjoy its gastronomic delights. However, there is much more to France than the grand museums or the iconic monuments. The picturesque towns and villages of France have for long, enticed travelers to explore and immerse themselves in the uniqueness of each place. Each village with its own distinct character will undoubtedly wind its way into the traveler’s soul.

Colmar with its brightly colored Renaissance houses, scarlet geranium-festooned balconies, canals, and cobbled lanes, is a popular destination for tourists throughout the year. Numerous fountains and the languidly flowing river through the area called ‘Little Venice,’ keep the town cool even in summer. The most visible legacy of the town traces its roots to the Middle Ages when it became an Imperial Germanic city. Most of Colmar’s imposing buildings like the Collegiale Saint-Martin, were commissioned by the church as places of worship. Many beautiful German Rennaissance buildings such as the Maison de Têtes are a treat to behold. The city has tons of accommodation options. Check out our list of 11 Best Hotels in Colmar.

Stepping into this picture-perfect medieval village one is immediately transported into a fairytale land. The turreted houses built almost entirely of red sandstone, set against the luscious green pastures of the southern Limousin are a striking sight in the summer. The red stone covered in greenery with tendrils of wisteria, and the narrow alleyways that meander between the ancient edifices, will take you back in time. The Romanesque-style Church of St Pierre is the focal point of the village.

Time seems to have stopped the clock in this mesmerizing fortified town of Dinan. Sitting on a hilltop high above the river Rance, this medieval town with its quaint warren of cobbled streets, half-timbered houses and three kilometers of beautifully preserved ramparts will transport you back in time. The best way to explore Dinan is on foot as you explore the tapered alleyways and the historic port.

The breathtaking white cliffs of Etretat along Normandy’s Alabaster Coast have been immortalized in the paintings of renowned Impressionist painters who were attracted by its ever-changing light. The dramatic rock arches formed naturally over hundreds of years, coupled with the L’Aiguille or the Needle, a pillar-like structure rising up from the sea, draws numerous visitors to this beautiful place. Etretat is much more than the cliff formations and the white pebble beach which flanks the seaward side of the town. Le Clos Lupin, the home of Maurice Leblanc, now converted into a museum, is an interesting place to visit too.

Not too far away from Colmar on the Alsace Wine Route, is the birthplace of Pope Leo IX – Eguisheim. The distinguishing feature of this village is the manner in which its streets are arranged in three concentric circles around the octagonal castle. The brightly colored half-timbered 16th and 17th-century houses with pointed roofs, the cobblestone streets and award-winning floral decorations are the pride of the village.

A crumbling medieval castle occupies the highest point of the hill where the village of Eze is situated. Perfectly located at a dizzying drop straight into the Mediterranean Sea, one is treated to a fantastic view the year round. With its cobbled streets, slattered shutters and flower-covered stone houses, the village of Eze is dramatically beautiful in the traditional Provencal style. Another aspect of Eze that draws visitors traveling between Nice and Monaco to the region is its spectacular gardens with exotic species of plants. Planning to visit? Make sure to stay at one of the 11 Best Hotels in Eze to make your experience even more unforgettable. Stop by at Nice and stay at one of our 11 Best Hotels in Nice before you go to Eze.

Locronan in Brittany, is a charming village which is part of the association of Plus Beaux Villages de France. Locronan has a fairly rich history, going back more than 2000 years. From being a sacred place for the Celts, to becoming an important religious center during the middle ages, and then an important sailcloth manufacturing hub from the 15th century onwards, each period of its history has left its mark on the town. The remarkable grand houses of Locronan, fine architecture, and the village’s natural beauty continue to lure filmmakers and visitors.

The beautiful walled town of Pérouges has remained largely untouched by modernism with its cobbled streets and 15th and 16th-century homes. The town is so well preserved that it has been the setting for many films, especially period films like The Three Musketeers and Monsieur Vincent. Located in the heart of the Rhone-Alpes region, it was once a thriving community in the medieval period because of its weaving and wine-making industry. The spring festival and musical events that are held here attract visitors from all corners.

Nicknamed ‘Gem of Alsace Vineyards,’ this fairy tale town has maintained its charm of the past centuries. Fortunately, the time has been kind to this town which looks much like it did four centuries ago. Its intact towers, ancient walls, and brightly painted half-timbered medieval and Rennaissance houses will transport you back in time. The town’s historic wine trade still draws many oenophiles to taste its many wine offerings, especially the world-famous Riesling.

The commune of Roussillon is in the heart of one of the biggest ochre deposits in the world, creating magnificent red cliffs and facades. The ochre deposits lend a natural reddish-brown hue to the village which is often described as one of the most beautiful villages in France. The facades of the houses in the village which vary from light yellow to a dark red are enhanced by brightly colored doors and shutters. Against the lush green pine trees of the region, the houses form a striking contrast.

Situated at a height of 2,042 meters above sea level, in the heart of Parc Naturel Regional du Queyras, Saint-Veran prides itself on being the highest commune in France and one of the highest inhabited villages in the whole of Europe. The scenic village with its traditional hamlets, wooden chapels and fountains, is home to a little under 300 residents. The mountains that surround the little village are a photographer’s delight.

The pedestrian-only village of Saint-Cirq-Lapopie is perched high on a clifftop three hundred feet above the meandering river, Lot. The village of St.Cirq which is enclosed by fortified gates, has many stunning old houses characterized by steep-sloped, flat tile roofs, built between the thirteenth and sixteenth century. The place is so steeped in history that it has 13 listed buildings. Narrow winding streets lead down to the village from the ruins of the 13th-century fort. The town attracts many creative people and is renowned for being home to Andre Breton the co-founder of Surrealism. Breton is said to have ‘stopped desiring being elsewhere,’ when he chanced upon this beautiful town.