Top 10 Things To Do In Colmar 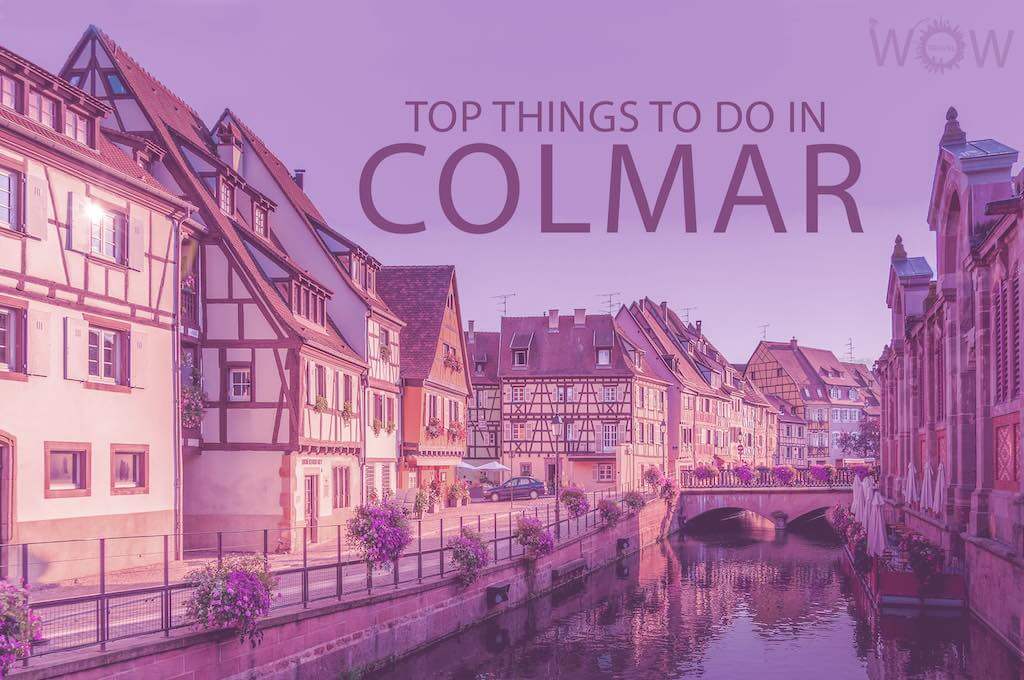 Looking for the best things to do in Colmar doesn’t have to be a challenge. This beautiful, colorful town in northeastern France’s Alsace region is a tourism hotspot that’s rich in history and culture. Visitors from all over the world are drawn to its picturesque half-timber houses, Gothic and early Renaissance structures, traditional festivals, and mouthwatering Alsatian cuisine and wine. As a gateway to Germany and Switzerland, it’s perfect for either quick weekend trips or longer holidays. Choose from the multitude of activities on offer, from intimate boat rides and museums filled with priceless works of art to dining al fresco in Old Town and shopping for fresh produce in the charming markets. Here are the top things to do in Colmar, whether you’re on a romantic vacation or a fun-filled trip with the whole family.

1
The Little Venice of Colmar, named after the famous city in Italy, is one of the town’s top draws. Set in the Krutenau district on the banks of the Lauch River, it’s a photogenic neighborhood where many of the tall, half-timbered houses—in pastel shades of yellow, pink, and sky blue—were constructed between the 14th and 18th centuries. Plenty of the best things to see in Colmar are right here, such as the historic Rue des Tanneurs where tanners used to live and work. The bustling Quai de la Poissonerie, where the local fishermen used to sell their catch, is a short walk away. Sightseeing can be done on foot or on a flat-bottomed boat along the tranquil canals. The neighborhood’s bridges are ideal places to take pictures of some of Colmar’s best views, and there’s no shortage of hotels, restaurants, charming shops, and lovely hotels to accommodate visitors.

Saint Martin’s Collegiate Church, dating back to 1235, is a prominent Gothic building in Colmar and the whole Alsace region. Restoration efforts in 1972 unearthed foundations from the 9th century as well as evidence of extensions from the 11th to 12th centuries. The building’s historic treasures include a Baroque organ case from 1755, a 13th-century Gothic stained glass window of a beardless Jesus Christ, and chapels adorned with medieval statues and altars. The church’s colored tile roof, huge pillars, and folk art images of Jews are some of its eye-catching exterior features.

Rain or shine, the covered market of Colmar (le marché couvert de Colmar) is open for business. This metal-framed, brick building celebrated its inauguration in 1865 and underwent several different functions before returning to its original purpose as a market hall in 2010. It’s a riot of colors inside, a result of wares such as fresh fruits and vegetables, just-butchered meat, a variety of cheeses, scrumptious pastries, homemade syrups and jams, and many more. A restaurant patio perched on the canal side of the building dishes out local specialties such as tarte flambée.

Set in the scenic Rue des Marchands district, Adolph House—also called the Adolf House—is a must-see in Colmar. Belonging to a certain Röschart in 1371, it’s believed to be the oldest house in town. The arched windows, large bays, and diamond lattices of the first two floors date from the second half of the 14th century. The half-timber gable and the third floor were added in the 16th century. The house underwent several modifications and in the 1800s, the Adolph family cleared the centuries-old Gothic picture windows. Another historic feature is the 16th-century well on one side of the house, surmounted by a gallows decorated with two lions’ heads.

Nature takes center stage at the Parc du Champs de Mars, a large public park just a stone’s throw from Old Town. It might be smaller than its namesake park in Paris, but its a popular attraction among locals and tourists alike. It’s a great place for a romantic stroll and there are benches under leafy trees for sitting and relaxing on a sunny day. Famed local sculptor Frédéric Auguste Bartholdi created the original fountain and statue of French admiral Armand Joseph Bruat in the park’s center in 1864. However, the fountain was destroyed by the Nazis in 1940 and rebuilt in 1958 by architect Michel Porte and sculptor Gérard Choan. Children can cool down in the sprinkler area on a hot summer day or enjoy the covered playground and carousel.

A visit to the grandiose Pfister House, just a short walk from Saint Martin’s Collegiate Church, is a must on any Colmar sightseeing trip. With its elaborate oriel windows, carved wooden balcony, and octagonal tower, it’s an outstanding example of medieval and Renaissance architecture. It stands apart from the traditional Alsacienne architecture of neighboring buildings. Stunning carvings and frescoes depicting scenes from the Bible and portraits of Germanic emperors decorate the ornate facade. Pfister House was built in 1537 for Ludwig Scherer, a wealthy hatter from Besançon. It has changed ownership several times over the centuries and has undergone renovations. In 1840, François Joseph Pfister acquired the house, giving it the name for which it is now known.

The Old Customs House is another historical and architectural gem that incorporates Gothic and Renaissance elements. Completed in 1480, it’s Colmar’s oldest public local building. General Jean Rapp, an officer in the French Army during the French Revolutionary Wars and the Napoleonic Wars, was born here. In the medieval period, the ground floor was used as a warehouse and a place of taxation for imported and exported goods. Historical meetings of Decapolis deputies were also held here. During the 19th century, the building was used for various purposes: as a theater, the office of the Chamber of Commerce and Industry, and a Catholic school for boys. Today, it houses a restaurant and serves as a venue for fairs, temporary exhibitions, and other public activities.

The House of Heads is one of Colmar’s top attention-grabbers, for good reason. This tall, large building boasts a facade that’s decorated with 106 carvings of small, grotesque human heads and masks. It was built in 1609 for Anton Burger, a merchant who later became a councilor and Stattmeister. Constructed in the German Renaissance style, the building is attributed to the architect Albert Schmidt. Its gables are adorned with volutes and a statue of a cooper, sculpted in 1902 by Frédéric Auguste Bartholdi, stands atop the structure. The House of Heads went through a series of different owners over the centuries, including one Baudoin de Launay and the Wine Exchange. Today, it’s home to an elegant hotel (one of the 11 Best Hotels in Colmar) and a Michelin-starred gourmet restaurant.

The begging order of the Preachers, also known as the Dominicans, arrived in Colmar in the mid-13th century. They began construction of the Dominican Church in 1283, though most of the work was accomplished in the first half of the 14th century. Tragedy struck in 1458 when a fire damaged the cloister and the roof, though reconstruction work was quickly begun. A baroque installation in 1720 eased the church’s original austere appearance. Since the 18th century, the conventual buildings have been used as gendarmerie barracks and as a school and reverted to a place of worship in 1898. Alsatian painter and engraver created the Altarpiece of the Dominicans in the 15th century, which is now preserved in the Unterlinden Museum. He also painted the Madonna of the Rose Bush altarpiece on wood, one of the church’s prized possessions to this day.

Situated in the heart of Colmar the Unterlinden Museum is one of the city’s top draws. In fact, it’s among the most-visited fine-arts museums in France, with a visitor count of 200,000 every year. A convent dating from the 13th century houses the museum, which was renovated and expanded in 2015 with the addition of the adjacent Neo-Baroque building that once served as Colmar’s public baths. The Isenheim Altarpiece created by German Renaissance painter Matthias Grünewald in 1516 is the museum’s most popular attraction. Colmar engraver and painter Martin Schongauer’s drawings, woodcuts, engravings, and altarpieces are likewise displayed prominently here. Other famous artists whose works are showcased at the Unterlinden include Hans Holbein the Elder, Lucas Cranach the Elder, Claude Monet, and Pablo Picasso.