The World’s 10 Most Beautiful Clocks 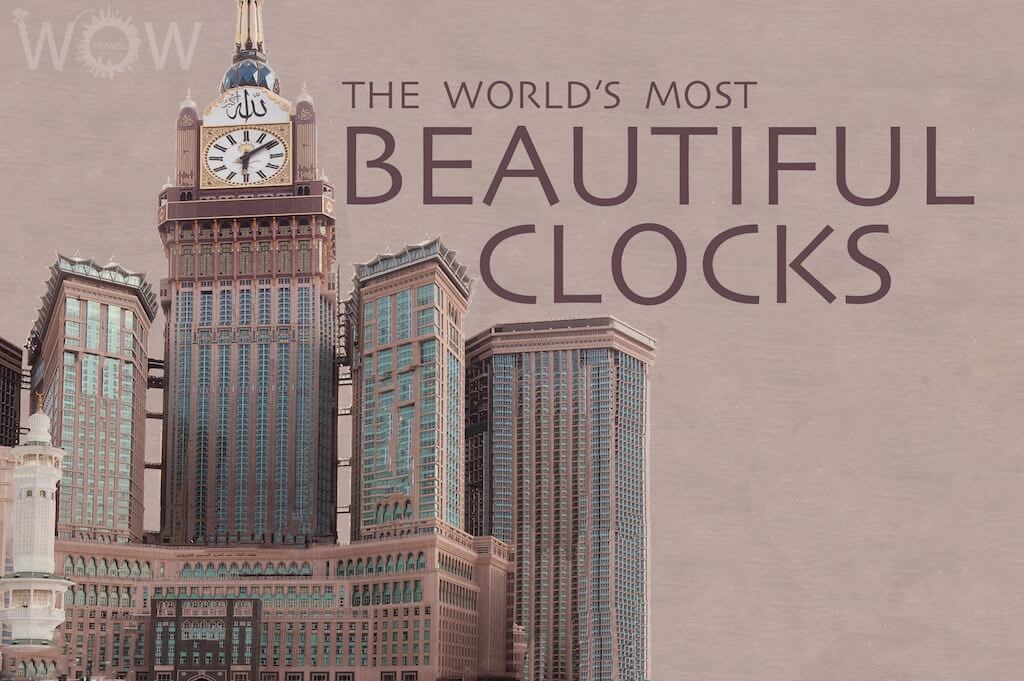 Time is what we want most, but what we use worst. No matter how busy we are, we must always take a break to breathe and think about something else than work. Sometimes we need a beautiful, magnificent and extraordinary clock to tell us it is time to relax, travel and enjoy life. Telling time is hardly the role of clocks anymore. But they can still draw a crowd. WOW Travel shares with you The World’s 10 Most Beautiful Clocks.

The clock tower marked the country’s independence at midnight on August 31, 1957, when the Malaysian flag was hoisted for the first time. Jalan Raja (the main road in front of the Sultan Abdul Samad Building) is closed during nights of special occasions, making it easier for the public to get closer to the building.

This gorgeous clock is found in the old part of the city which is a UNESCO heritage site. Today it is one of Bern’s most important sights. The ornate astronomical clock with its moving figures was built in 1530. It served as the city’s main clock and thus had an authoritative function in Bern. It was from there that travel times indicated on stone markers along the cantonal roads were measured. Standard units of length – formerly cubit and fathom, today meter and double meter – are displayed for the public in the arch of the gate.

Built in 1859, the “Big Ben” was originally a nickname used for the gargantuan bell inside this clock tower. These days, the moniker refers to the bell, the clock face, and the 315-foot tower too—though the beloved icon was officially renamed the Elizabeth Tower in 2012, as part of Queen Elizabeth II’s Diamond Jubilee celebration.

Is the second tallest building in the world (short of Dubai’s Burj Khalifa) as for Dec 2016. Its scale is further conveyed by the fact that each of four clock faces is 151 feet in diameter and it takes two million LED lights to light it up each night. Every day the clock announces the Muslim call to prayer, while an observation deck at the base of the clock allows travelers to take in dramatic views of the holy city.

It seems that the folks at Osaka Station City couldn’t decide if they should install a giant clock, water fountain or artwork, so they combined all three. This dot matrix water clock displays the time, as well as pretty graphics, using falling drops of water.

Every day the city’s central Marienplatz square is crammed with onlookers with their chins aimed skywards. They’re watching one of the city’s most loved oddities, the Munich Glockenspiel, or carillon. This chiming clock was added to the tower of the Neues Rathaus (New Town Hall) the year the building was completed in 1907. The clock rings daily at 11 a.m., noon and 5 p.m. (from March to October), with a 12-minute show featuring 43 bells and 32 life-sized figures. The show includes the story of the wedding of Duke Wilhelm V and Renata of Lorraine, a jousting tournament and a traditional “coopers’ dance” performed by the city’s barrel makers. The clock is now part of the new town hall in Munich. Some of the Top 11 Gay Friendly Hotels in Munich are not far from this attraction.

San Francisco’s Ferry Building, a Beaux-Arts building with a 245ft-tall tower, was the city’s primary point for arrivals and departures between 1898 and the late 1930s, when the Golden Gate and Bay bridges were built. Inside, a 660ft-long skylit atrium that once provided access to ferries now houses shops and restaurants, including Blue Bottle Coffee and the Asian restaurant Slanted Door. It is especially crowded on Saturday mornings when a farmers’ market takes over the space in front and in the rear of the building, overlooking the bay.

Every hour, hundreds of tourists from all over the world with cameras at the ready gather in front of the Old Town Hall to enjoy a fascinating mechanical performance which in the Middle Ages was considered one of the wonders of the world. The Prague Astronomical Clock, 59 meters (193 feet),  which for 600 years has been one of the greatest treasures of the city, still amazes people with its procession of Apostles, moving statues and visualization of time like no other instrument in the world.

Formally known as The Tower of Victory and Peace, this impressive clock tower stands in the middle of the Centre Block – the main building structure of the Canadian parliament complex, in Ottawa. This 92.2 meters (302 ft) tower replaced the 55 meters (180 ft) Victoria Tower which burned down in 1916.

Centered in the heart of downtown Philadelphia stands the nation’s largest municipal building (larger than the U.S. Capitol), serving the city’s government and politics for over 100 years. It is situated in the exact geographical center of William Penn’s original 1682 plans for the city, now known as the intersections of Broad and Market Streets, Center Square. While ascending to the Philadelphia City Hall’s observation deck in a tiny elevator, visitors can see the internal workings of the tower, the four big clocks as well as views away from the tower. Standing on the top of the tower is a 37-feet-high bronze statue of William Penn, the founder of Pennsylvania and planner of Philadelphia.

Count time by sensations and experiences, and not by minutes and hours. Simply enjoy life and the great pleasures that come with it.