Top 7 Things To Do In Mykonos 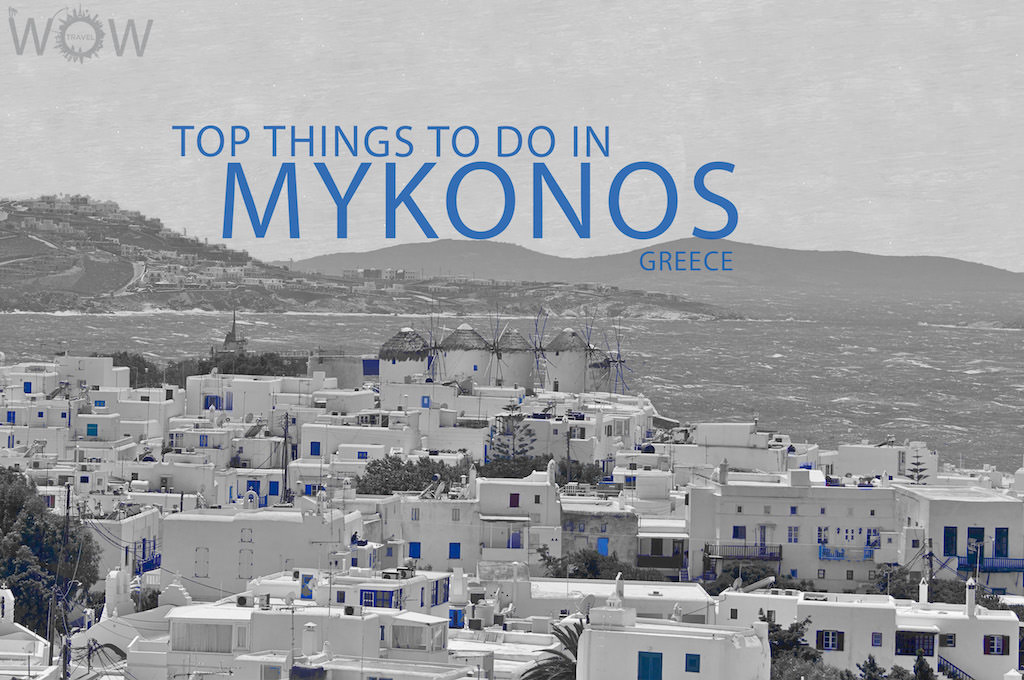 Mykonos is an island in the Cycladic region of the Aegean Sea and the second most celebrated Greek island after Santorini. Every summer it gets flooded by millions of tourists, who are attracted by its magnificent beaches, natural beauties, picturesque villages, cosmopolitan lifestyle and sophisticated nightlife. Some refer to Mykonos as the “Ibiza” of Greece based on the party atmosphere that occurs during the summer months, and with its paradise-like beautiful beaches, delectable Greek cuisine, super-luxurious resorts and those famous windmills and churches, this is the perfect island to play, sightsee and unwind on. Enjoy our list of the Top 7 Things To Do In Mykonos.

Little Venice is one of the most famous and charming areas in Mykonos, and it resembles Venice of Italy, due to its elegant old houses built directly on the sea edge. The seashore is lined up with bars and cafes where you can have a drink while admiring the sunset. The majestic view from Little Venice has attracted numerous renowned artists throughout the years. The deep blue sea and snow-white walls blend in harmony and the scenery is completed by the golden-red rays of the sun. Stroll along with the famous windmills or take a Sunset Cruise from Ormos port with your significant other, to enjoy the incredible sunset in the most romantic way. Source: greeka

Mykonos Town (Chora) is definitely one of the nicest and most charming towns of the Greek islands, with endless tiny little streets lined with white buildings splashed with colorful doors, shops, windmills, churches, terraces and whitewashed houses. The streets of Mykonos town were such fun to explore, visitors will be amazed by the quaint winding streets leading on from one another and most likely will get lost. Every corner brings a new surprise. This is also the place to pick up typically Greek souvenirs including cheery ceramics and shell mobiles.

The windmills are a defining feature of the Mykonian landscape. There are many dotted around the island, but most are concentrated in the main town of Chora and all facing the North. The famous “Kato Mili” in Chora (Greek for lower mills), stands majestically in a row on a hill overlooking the sea to harness the strong Northern winds. The windmills are symbols of an important aspect of the history of the island and many of them have been refurbished and restored to preserve their beauty. No windmills are in operation today but many serve as homes to locals and vaults to numerous Mykonian heritage documents. Source: inmykonos

The mykonian Lighthouse called Armenistis is worth visiting cause of the scenery around it. From there you may see all the boats arriving and departing Mykonos. Tinos island looks like it is next to you from there .the lighthouse Armenistis is at the northeast of the island and 7 km away from Mykonos Town. You can get there by following the signs to Fanari. This lighthouse was manufactured in 1891. The altitude of the tower is 19 meters (62 ft) and the height of the focal plane is 184 meters (603 ft). Source: mykonostour

Located on the south side of the island, Platys Gialos is a popular tourist resort. The beach of the region is very well organized. The long sandy beach, the crystal waters and the completely equipped installations that facilitate the bathers are the reasons for the fame of Platys Gialos. Mykonos is home to many other beaches, some known for their outrageous parties, some catering to predominantly gay tourists, and some family beaches.

When on Mykonos, it’s almost compulsory to take a day trip to the mythical birthplace of Apollo and Artemis and discover one of the wonders of the ancient world. Once the most sacred site in Greece, Delos is thousands of years old and easily compares in the scale and magnificence of its ruins with Delphi on the mainland. Only accessible by boat and liberally scattered with classical ruins and fragments of marble statuary, this is one Mykonos experience absolutely worth skipping the beach for. Source: Viator

Paraga and Paradise are the main areas for clubbers and party-goers, with popular beach parties hitting off at 5pm and going on into the early hours of the morning. There are also some very cool bars and clubs back in Chora, such as the ones in Little Venice. But the best place to experience a real good party in Mykonos is at Tropicana Mykonos Club.