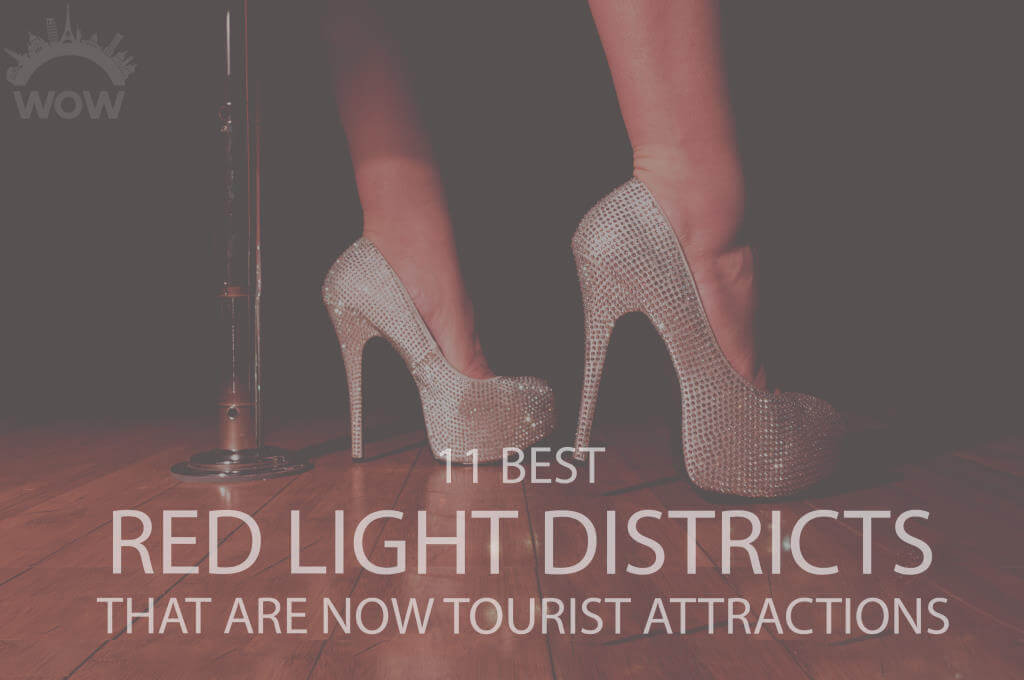 The mainstream, the margins, and the urban morals all converge under a neon glow in redlight districts around the world. After all, there’s more to a city’s character than its landmarks and attractions listed on to-do lists and guidebooks. If you really want to see what makes a town tick, then exploring its underbelly is a must. The world’s most famous red light districts, including Amsterdam, London, and even Los Angeles, are vibrant, exquisitely sordid, and exhilarating, to say the least. Elsewhere, there are cities talking about demarcating space, such as red light districts in Toronto. Cities all over the world have long-standing “relationships” with the sex industry. Either it’s an identifiable place of prostitution (legal/illegally regulated), or it’s limited to adult cinemas, strip clubs, and sex shops. But, the intrigue around it is equally rife everywhere and never seems to abate.

Whether they’re spoken about in hushed tones or openly, there are corners of almost every major world city where the sex trade thrives. The tangle of thorny dilemmas aside, there are redlight districts that are safe for curious travelers to visit and see what the hoopla is all about. So, where are these infamous places in the world, and can you visit them as tourists? Check out the 11 best redlight districts that are now tourist attractions as well.

We begin with one of the most famous red light districts in the world, De Wallen in Amsterdam. One of the largest and most well-known red light districts in Amsterdam, De Wallen sets the bar astronomically high. For one, it’s shockingly beautiful, with the gabled houses and tree-lined canals. Secondly, it’s surprisingly safe, as government regulations keep the area as pure, clean, and regular as a neighborhood dedicated to sex could possibly be. Picture this: sex workers occupy windowed red-lit cabins along the streets where pimping is illegal, but brothels are licensed, and prostitution is legal. In fact, everyone who’s involved, right from the client to the sex worker, pays taxes! Furthermore, De Wallen is one of the Top Things To Do In Amsterdam!

What’s more, Amsterdam even has a union for sex workers, with organizations such as the Prostitution Information Center offering pro-legalization/pro-sex platforms and even tours of De Wallen. The aim? To de-stigmatize and empower those working in the industry and who have chosen to engage in this line of employment. Don’t believe us? Check out this Amsterdam Red Light District & Coffee Shop Tour. It’s no wonder that Amsterdam is one of the Safest Cities In The World.

The capital of France, Paris, is famous as the city of love. So, it makes sense that the sexier side of love can be found here as well! Behold Pigalle, a high-brow take on a red light district, which is home to the famed Moulin Rouge. Think a full Parisian dinner service complete with a sex show that’s not obscene and yet utterly hedonistic and titillating. Despite sex work being illegal in Paris, officials usually turn a blind eye to Pigalle and its extra-curricular activities. The area is full of peep shows, strip clubs, porn stores, and sex shops, as well as alcohol-fueled belligerence in the form of clubs and bars.

However, the area is gentrifying rapidly, and the fact that Van Gogh and Picasso worked or lived here adds a touch of chic to the sleaze. Besides all kinds of x-rated adventures, the southern part of Pigalle is now a bohemian enclave with lovely little restaurants serving tiny plates of food and craft cocktails.

As was made famous in Hangover II, Patpong in Bangkok, Thailand is one of the most famous redlight districts in Asia. A fast-paced life and sky-high temperatures essentially make Bangkok perfect for all things sordid and steamy. So, it’s not surprising that sex work here isn’t legal or illegal, and it’s made the city an unofficial hub in Southeast Asia. Many real-life “Wolf Packs” have tested their mettle in Patpong, which had very unimaginative origins as a banana plantation! After the 1960 influx of American troops, there was a demand for the entertainment of a salacious kind. In fact, you’ll see practically every Thai stereotype in Patpong; think massage parlors, ping-pong shows, ladyboy cabarets, and go-go girls. What’s more, you’ll even find stalls selling an entire (unimaginable) spectrum of enhancements and sex toys lined along the two streets.

When it comes to redlight districts in Thailand, there’s another city that’s a top contender – Pattaya!

A real-life legendary Sodom and Gomorrah sit smack dab in the busiest part of the capital of Japan, Tokyo – and it’s called Kabukicho. Japan is famous for its eccentricities, and Kabukicho is no different. The host and hostess clubs of this redlight district are the absolute stuff of legends. These sex-packed neighborhood bars exclusively employ pretty young men and women who host visitors. However, services remain fairly tame (think conversations and flirting, but there are bars where sex is for sale – and they’re on almost every block. If you thought that well-mannered and mild Japan has a spic-and-span sex trade, think again. Here, sex work is technically illegal, but as usual, there are ways around these laws. What’s more, organized crime is involved in the daily running of Kabukicho. So, it’s much like the red light districts of London and Amsterdam, minus the Yakuza, of course.

Mild-mannered Hamburg is home to one of the most unusual redlight districts in the world, the Reeperbahn. Not only is it a redlight district, but it’s also one of the top two nightlife neighborhoods in the city. Part of the area is chock-full of theaters, bars, nightclubs, and restaurants. Meanwhile, there are sex shops, strip clubs, and even a sex museum elsewhere in the same neighborhood. However, the most hardcore of all action takes place on the Herbertstraße, where prostitutes entice prospective clients from behind windows.

But still, sensibilities are taken care of by partitioning the street so as to not offend people, especially minors. Plus, sex work is legal in Germany, making the entire scene seem less tawdry than in other parts of the world. If that wasn’t enough, those under 18 years of age and women are strictly forbidden in Reeperbahn. That’s what makes it one of the Top Things To Do In Hamburg.

One of the most (in)famous red light districts of London is an indoor one! Welcome to Chelsea, where lies the Chelsea Cloisters, which is rather indelicately described as ‘the ten floors of whores.’ Would it surprise you if we told you that the building is a residential one? Yes! Owned by millionaire Christopher Moran, the sex workers in the building are so comfortable in the setup that they lunch downstairs wearing pajamas and stockpile on sex supplies themselves. For them, the building is like a hotel, and no one bothers them. In fact, the atmosphere is very friendly, and everyone just gets along fine. Despite the supposedly sordid activities that go on here, the building is shared by the prostitutes and regular families with children – and no one bats an eye. This is one of the most popular red light districts of London.

Zona Norte in Tijuana is one of the most legendary redlight districts in North America. Located right across the border from San Diego, Tijuana’s entertainment offerings by the adult industry are nothing less than legendary. Zona Norte is the big daddy and houses Adelitas, which is not just Tijuana’s biggest brothel but also the oldest and the largest brothel in all of North America! The city is a “tolerance zone,” which means that not only is prostitution legal, but also clubs must conform to health regulations. Besides Zona Norte and other established brothels, prostitutes known as “paraditas” openly advertise on the streets and have become a permanent part of Tijuana’s fabric and cultural history.

Even a country that’s known for world-class chocolates and waffles has a seedier side. Behold what is dubbed as Europe’s most high-tech bordello, the redlight district of Schipperskwartier in Antwerp, Belgium. But, it hardly looks like what a red light district typically looks like. Not only is it not seedy, but the three-block tolerance zone (read: legal) that is the Schipperskwartier offers a civilized, today, and tasteful way to indulge in baser activities.

The brothel of Villa Tinto is its crown jewel. The swanky and safety-conscious brothel looks more like an outpost of the W than a brothel. For one, every woman’s biometric data is stored in the security database, and a fingerprint reader activates the room amenities. Plus, every room has a call button for summoning the police if customers get out of hand. Think of it as a mini-mall for sex – really. If cities such as Toronto, London, and Los Angeles were to put up red light districts, they could model them off of Schipperskwartier.

Bangkok’s other red light district is Soi Cowboy, and it’s the actual place that was immortalized in The Hangover II. The entertainment district’s origins go back to the 1970s when it was started by an African-American vet. The 150-meter-long street is home to more than 50 go-go bars, with hundreds of women offering everything from live sex acts to ping-pong shows. In fact, Soi Cowboy is a major tourist attraction. So, culture vultures can glimpse into Bangkok’s infamous sex trade. Since Soi Cowboy is officially an “entertainment zone,” they can play music later than other areas. Plus, they can even sell alcohol, despite regulations being slightly arbitrary.

There aren’t any red light districts in Los Angeles, just red light streets. For instance, Figueroa Street, Sepulveda Boulevard, and Sunset Boulevard are all famous for the sex trade, but it’s Western Avenue that wears the crown. The bulk of LA’s sex trade takes place on this street which was business as usual even during the peak of the pandemic’s stay-at-home orders. Porn performers, escorts, strippers, you’ll find them all peddling their wares here if you know what we mean. It’s not legal, but no one hassles the workers. Rather, you’ll find police officers working with advocacy groups to “increase awareness of good sanitation habits.”

Is it surprising that Thailand has one of the most redlight districts in the world? Not really, given the country’s liberal attitudes towards sex, gender, and even the LGBTQ lifestyle. One of the largest ones lies in Patong in Phuket, which has more than pristine beaches, turquoise seas, and palm-lined beaches. Patong is the main party hub in Phuket, complete with rowdy bars and nightclubs pounding live music until late. Just like other redlight districts, you’ll find all manner of sex shows, for-pay sex, and anything that you can possibly imagine or not imagine that goes along with it. The heart of all action is along Bangla Road, where you’ll find everything from sex workers to notorious clubs and bars.