Top 10 Things To Do In Antwerp 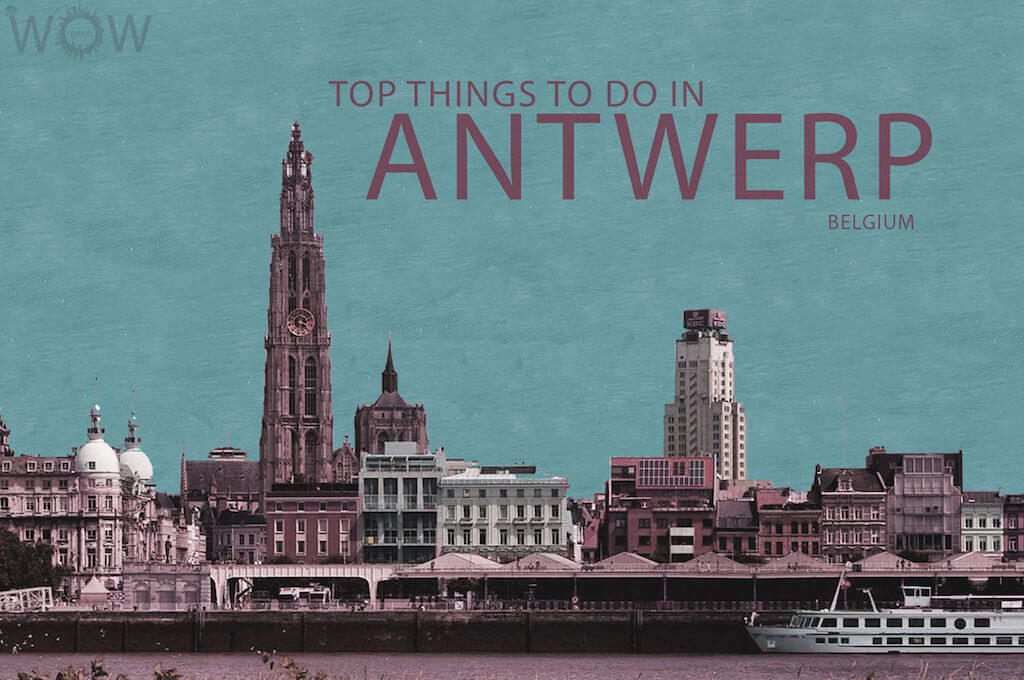 Situated about 44 km (27 miles) from Brussels, Antwerp is a vibrant city that is famous for its thriving port, outstanding cuisine, its vibrant artistic community, many museums and art galleries and its traditional role as Europe’s diamond market. Antwerp is just perfect for a short weekend getaway so take a look at our list of the Top 10 Things To Do In Antwerp.

Antwerp’s Grote Markt (town square) is a jewel of 16th-century architecture. The houses of the Guilds are richly decorated with golden statues, like in Brussels‘ Groote Markt. The Stadhuis (town hall) was completed in 1564 in Renaissance style, with a touch of Flemish Gothic so as not to contrast too sharply with the surrounding buildings. In the middle of the square stands an 1887 statue of Brabo, the legendary slayer of the giant. Source: eupedia

Cathedral of Our Lady

Our Lady’s Cathedral of Antwerp is one of the largest in Europe. Aside from being inscribed in the UNESCO list, this gothic cathedral boasts a majestic 123 meter (403 ft) high spire that dominated the skyline of the city for five centuries without changing. There has been a church on the site since the 9th century, long before the Cathedral of Our Lady was begun in 1352.

Built-in neo-Baroque style and designed by Louis Delacenserie, the Antwerp Central Station is one of the world’s most impressive railway stations. Its two neo-Barque monumental façades are topped with an enormous 60 meter (196 ft) cupola that can be seen from distance.

Also known as “the stone,” this fortress (the oldest building in Antwerp) was once Antwerp’s castle; its origins can be traced back to the early 13th century, although the castle was renovated during the 16th century. Originally built to protect the city against Viking raiders, the castle has been remodeled and updated several times.

The Meir is Antwerp’s main shopping street lined by 16th century’s patrician mansions. Check out the De Stadsfeestzaal (City’s Party Hall) — one of the most beautiful shopping centers you’ll ever see with more than 40 luxurious shops.

The St. Paul’s Church or Sint-Pauluskerk is a Roman Catholic church. This “baroque jewel” stands in a “gothic shrine”. The former church of the Dominican monastery of 1571 is pleasing to the eye: the splendid baroque altars, the sublime furniture, the famous organ, over 200 sculptures and more than 50 paintings, among them a series of 15 works of Jordaens, Rubens, Teniers, Van Balen, Van Dyck. They give the church its unique charisma. The garden of the Calvary next to the church building appears to be a sculptural fragment of an epic movie about Christ’s suffering and resurrection. Source: mkaweb.be

The Vleeshuis (Meat House) is an imposing gothic 500-year-old turreted building that once served as headquarters for the guild of butchers, the most powerful guild of its time. Today, it is a fascinating museum which offers six hundred years of the history of Antwerp through the sounds and music of its streets, its dance-halls, churches, theaters, and belfries. In the Middle Ages, it was illegal for anyone who was not in the army to play drums or trumpets. To circumvent this regulation, people made their own instruments. Some of these unusual inventions are on display and you can listen to them through headphones. Source: belgiumwithkids

St. Anna Tunnel is a 572 meter (1,876 ft) unique pedestrian passageway that was built underneath the Scheldt in 1931-1933 to link the old centre with the left bank (Linkeroever). It is still served by old wooden escalators.

Located at the Modenatie on the corner of Nationale and Drukkerijstraat, other than having the Flanders Fashion Institute (FFI), the Fashion Museum (MOMU) and the Fashion Academy on its domain, it also holds a lot of fashion boutiques in the surrounding area or streets, especially around the Kammenstraat, Schuttershofstraat, and Lombardenvest. Another distinct fashion area would be Zuid District – it basically means the ‘South’ district and it has a lot of designer shops, interior showrooms and contemporary galleries in the neighborhood. For notable outlets, go to the Demeulemeester or Atelier Assemble (for retro clothing). Source: iamaileen.com

Vrijdagmarkt is the city’s oldest antique flea market at the historic center of Antwerp. It has been operating every Friday morning since the 16th century and offers second hand products from bikes, to old furniture and antiques, Everything is sold by auction.