Top 10 Things To Do In Los Angeles 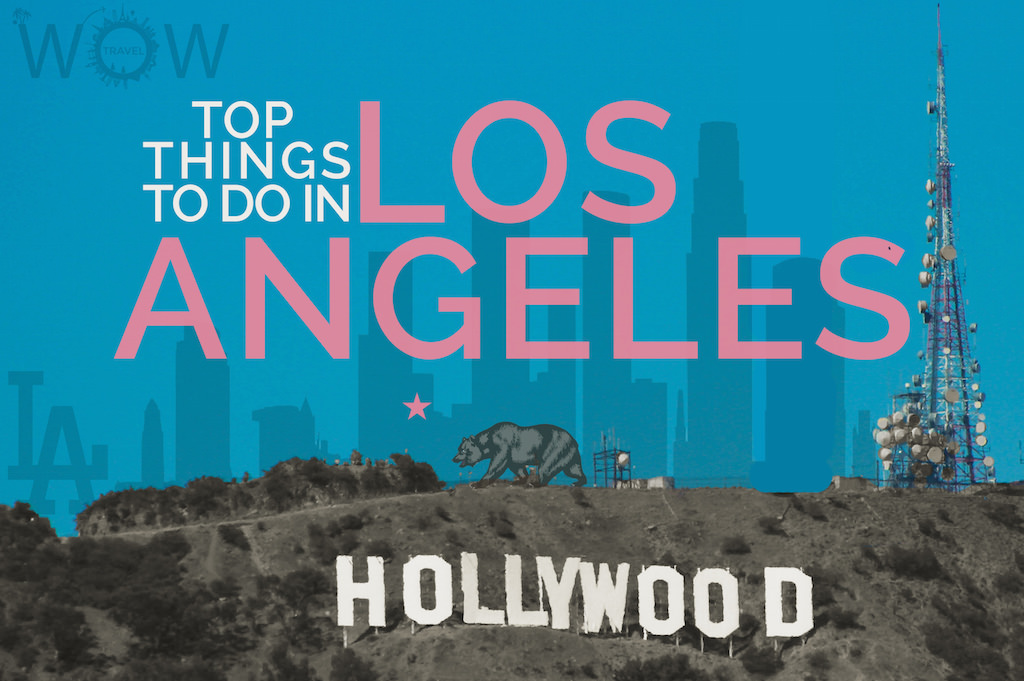 Los Angeles, the second-largest city in America, is a modern, trendsetting city with diverse residents, a rich global culture, varying landscape, good eats, impressive architecture, eye candy and sunny nearly all year around. Visit the Universal Studios theme park, take a picture of the Hollywood sign, wander along Hollywood Boulevard to Grauman’s Chinese Theater and look at all the celebrity handprints and footprints, shop at the expensive stores on the twisty part of Rodeo Drive, defy gravity by riding one of the scariest roller coasters in the world at Magic Mountain Kingdom and have a fun day at Disneyland Park. Welcome to America’s entertainment capital and California’s liveliest city with non-stop things to do. Enjoy WOW Travel’s Top 10 Things To Do In Los Angeles.

“Los Angeles is a microcosm of the United States. If L.A. falls, the country falls” – Ice T.

Walk along Sunset Boulevard that runs from downtown Los Angeles to the Pacific Ocean, through some of Los Angeles’ most exclusive neighborhoods. The Sunset Strip is a major thoroughfare used to get from Hollywood to West Hollywood and beyond. The boulevard itself runs for many miles both east and west. The Eagles’ biggest-selling album, “Hotel California,” featured a photo of a Sunset Boulevard hotel on its cover, the “Pink Palace” itself – the Beverly Hills Hotel.

Take a stroll on the Boardwalk and you’ll see various street performers juggling, dancing, singing or haggling. Step away to the beach for some peace and quiet. You may even spot a few dolphins swimming or even seals very close to the shore. Don’t forget to visit the rest of the eclectic and artsy neighborhoods like Abbot Kinney Blvd, Washington Blvd, Lincoln Blvd and Rose Ave. for boutiques, art galleries, restaurants, bars, and cafes.

Renowned for its gardens, architecture, artwork and impressive location on a hill overlooking LA, the Getty Center is a must-do attraction for anyone who visits the city. This inspiring museum features outdoor sculptures, gorgeous gardens and an incredible collection of art. Enjoy Impressionist masterpieces, European decorative arts and American photography.

“In Los Angeles, by the time you’re 35, you’re older than most of the buildings” – Delia Ephron

Located just 42 km (26 miles) across the Pacific from Los Angeles, Santa Catalina Island, also known as Los Angeles’ leisure isle, is an easy-to-reach paradise that offers something for everyone. You’ll be amazed at the beauty of the island and the friendliness of the people. The island features fabulous land and water activities including the zip line adventure, SeaTrek undersea adventure, super-high-speed boat rides, flying fish spotting, snorkeling, submarine trips, romantic lodging for every taste and budget, a diversity of dining experiences and all-night bar crawls.

The first of Walt Disney’s ventures, Disneyland Park is 85 acres of everything you love about Disney – from the whimsical characters that dominate the rides and roam the walkways to the sophisticated “animatronics” that wow visitors, no matter how many times they’ve been here. Enter a magical kingdom where you can sail with pirates, explore exotic jungles, meet fairy-tale princesses, dive under the ocean and rocket through the stars.

Sprawling historic market features tons of variety of fresh fruits and vegetables, many different types of cuisine and restaurants, handmade goods from all different kinds of cultures, a range of trendy shops, gourmet grocery purveyors and more. There is live music on occasion, plenty of opportunities to people watch and diversity of flavors in one place for everyone, from fish and chips, pizza, charcuterie plates and baked goods to Malaysian food, Singaporean food, and even chocolate shops.

Six Flags Magic Mountain is a 262-acre theme park located a 45-minute drive northwest of downtown Los Angeles and it is by far the greatest theme park in America. Hardcore rollercoaster fanatics and thrill seekers alike must come here and dare to defy gravity by riding the world’s tallest and fastest looping roller coaster, the worlds first 100mph roller coaster or the state-of-the-art Twisted Colossus, the most innovative hybrid coaster in the world. The roller coasters grow more impressive each year and even the old ones can hang!

Griffith Park is one of the largest urban parks in North America, covers 4,310 acres of land with California oak trees, wild sage and manzanita. Over the years recreational attractions have been developed throughout the Park, however, an amazingly large portion of the Park remains virtually unchanged from the days when Native American villages occupied the area’s lower slopes. Today’s Griffith Park offers numerous family attractions, an assortment of educational and cultural institutions, and miles of hiking and horseback riding trails. Check out the Griffith Observatory, one of Los Angeles’ great cultural icons, located above Los Feliz on the southern slope of Mt. Hollywood, offers some of the best city views, from the Pacific Ocean to Downtown.

“I love Los Angeles. I love Hollywood. They’re beautiful. Everybody’s plastic, but I love plastic. I want to be plastic.” – Andy Warhol