Top 12 Things To Do In Crete 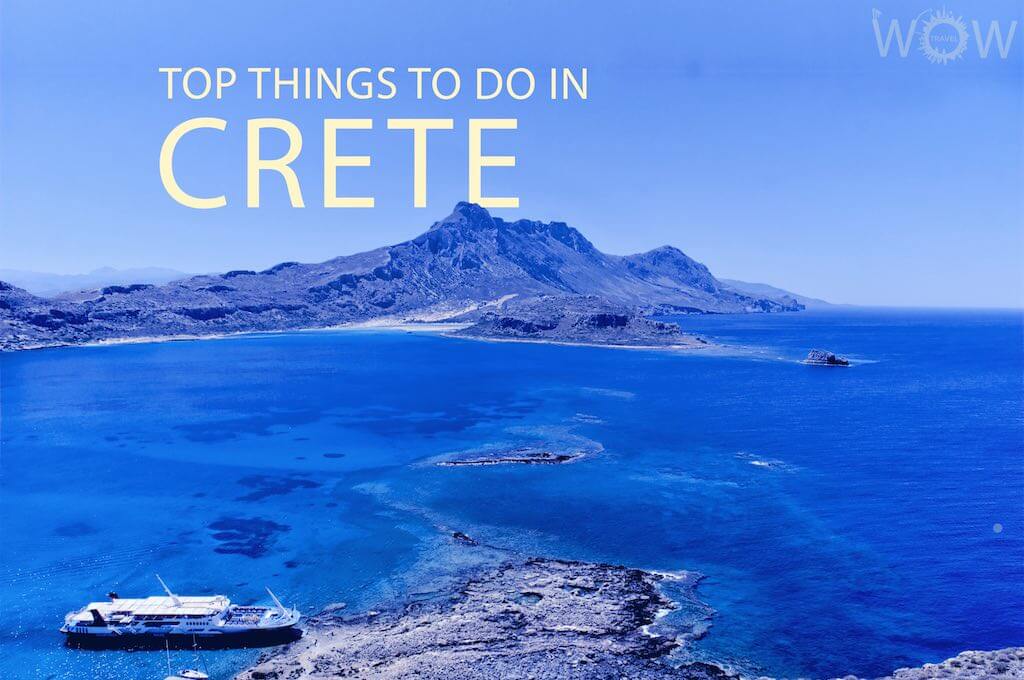 Crete, the largest and most populous of the islands of Greece, is located 318 kilometers south of the port Athens. It is the most southerly outpost of Europe with its southern coast extending to the Libyan Sea. The island is steeped in tradition and history; being the birthplace of the Minoans, the first advanced civilization in Europe. Before becoming a permanent part of Greece in 1913, Crete was ruled by the Romans, Byzantines, Arabs, Venetian Republic, and the Ottoman Empire. Traces of its rich history are visible at various places on the island, one of the most famous being the Palace of Knossos. The island with more than 1,000 kilometers of coastline is a stunning blend of contrasting landscapes. Ancient settlements and picturesque villages nestle between dramatic mountains, separated by breathtaking gorges, whilst gorgeous beaches form the perfect frontage to modern towns. Crete is also a ‘foodie’s paradise’ with the healthy local cuisine topping the menus at almost every eating place.
Booking.com

The capital city of Crete is the fifth largest city in Greece. It was founded in 824 by the Arabs who had seized the island from the Byzantine Empire. A century later the Byzantine forces recaptured the land and controlled it for over two centuries before it was sold to the Republic of Venice. The Venetian influence on the city is evident in the fountains and fortifications which still stand, the most prominent being the Koules Fortress and the ramparts. Heraklion has the distinction of being the site of the longest siege in history which lasted 21 years when its fortifications were able to keep the Ottoman’s out. Today the city is a popular stopover for cruise ships sailing the Eastern Mediterranean and is also fast becoming one of the most visited places in Greece.

The Palace of Knossos

The grand capital of Minoan Crete, the Palace of Knossos, is one of the most renowned historical attractions on Crete. Located just 5kms from Heraklion, the ruins attract visitors from far and wide. The site is said to have been inhabited during the Neolithic period and then later flourished under the Minoans. Cretan palaces were built in different locations by the Minoans after 2000 BC, but the palace of Knossos was the largest, with its main building alone spread out over three acres. There were bathrooms, toilets and a drainage system in the palace. A theater with a seating capacity of 400 spectators was also discovered. Replicas of the most famous frescoes of Knossos are housed in the Fresco Gallery of the restored part of the palace.

At an altitude of 220m and just 2km from the village of Melidoni is this stunning cave, adorned with some beautiful stalactites and stalagmites. The cave which was used as a place of worship during the Neolithic times also has a more tragic significance to Crete as it was the site of another massacre. When the Turks laid siege to the area, about 370 villagers which included women and children and 30 soldiers holed themselves up in the cave for protection. After a three month siege, the villagers were asphyxiated by the Turks who lit a fire to ‘smoke them out.’ The bones of those massacred are contained in a large sarcophagus within the cave. There is also a small chapel at the entrance of the cave.

The western part of Crete with its enormous mountains, memorials, and folklore is presided over by the romantic port city of Chania, the second-largest city on the island. Chania was the capital of Crete until 1971 when it was replaced by the present capital, Heraklion. The two distinctively different parts of the city, the old and the modern are quite clearly demarcated. The old town which has been inhabited since Neolithic times lies near the old Venetian harbor. It still maintains its old-world charm with cobbled streets and romantic alleyways flanked by colorful houses. The new town is in sharp contrast to the old one but has some historical buildings that are worth exploring.

At the southwestern corner of Crete in Chania province lies the breathtakingly beautiful Elafonisi Beach. The fine pink-white sand of the beach juxtaposed against the turquoise blue water is a photographer’s delight. However, during peak season the beach can get extremely crowded. Elafonisi Islet lies just off the beach and can easily be accessed by walking or wading through shallow water. The islet is a protected nature reserve with low dunes and several semi-secluded coves. There is a plaque on the highest point of the island to commemorate the people who were killed on Elafonisi by the Ottoman soldiers. A large wooden cross on the island also commemorates the victims of a shipwreck that occurred in 1907.

The popular 16km Samaria Gorge which cuts through a part of the National Park of Samaria is on the itinerary of many visitors as a ‘must-do’ experience. Beginning at an altitude of 1230m at Xyloskalo, the hike ends at the coastal village of Agia Roumeli near the shores of the Libyan Sea. During the months of April and May, the trail is extremely scenic as wildflowers grow in abundance. You may find the initial part of the trek a bit of a letdown, but after you cross the abandoned village of Samaria, the trail becomes more scenic and interesting. Many people hike this trail so you’ll never be without company.

Walking through the old town of Rethymno is a step back in time. The Venetian-Ottoman quarter with its maze of lanes, narrow stairways, cobblestone streets, and historic buildings seems to be frozen in a period of its own. One of the best-preserved castles in Crete is the Fortezza of Rethymno, the Venetian-era citadel which overlooks the old town. Also worth visiting is the Venetian Harbor which is a constant buzz of activity. The coastline along the route to the city has some beautiful beaches and resorts. There is also a good sandy beach east of the old town where visitors can take a break from sightseeing and relax. With a sizeable student population residing in the city, the town also has a vibrant nightlife.

23 kilometers south of Rethymno lies the 16th century Arkadi Monastery. The monastery is historically significant for the Cretans as it was the site of a tragic massacre wherein hundreds of locals who had been cornered by the Turks, massacred themselves and their oppressors. The tragic event is thought to be the spark that set off the freedom struggle. The impressive Venetian church with its ornate triple-belled tower and Renaissance facade was built in 1587. On the grounds of the church, visitors can also visit a small museum and an old wine cellar which was used for storing gunpowder.

Near the town of Plaka in northeastern Crete is the Gulf of Elounda where the Spinalonga island is located. The island was originally a part of Crete but was carved out of the coast for defense purposes by the Venetians in 1526. A huge fortress was built on the island in 1579. In 1903 the island was converted into a leper colony and as many as 1000 Greeks were quarantined on the island. When a cure for leprosy was discovered in 1948, patients gradually began to leave the facility. The last person to leave was in 1957. The island catapulted into the public imagination due to the bestselling novel ‘The Island’ by Victoria Hislop in 2005. There is now a constant stream of visitors to Spinalonga Island.

This Greek Orthodox Monastery located in the Akrotiri peninsula was built by two Venetian brothers in the 17th century. The main church which is dedicated to the Holy Trinity is flanked by two smaller domed chapels, following the Byzantine architectural cruciform style. One of the most outstanding features of the chapel is its altarpiece. The monastery which is still in use has a rich library with some rare books and also a small museum. Wine is also made on the premises and can be tasted and bought from the store here.

Getting to this little piece of paradise may not be everyone’s cup of tea and is definitely not for those seeking an easy walk to the beach. The drive down from the city of Chania may be a bit nerve-wracking as there are quite a few twists and bends but the adrenaline rush does not end there. Once at the destination, it’s a steep walk down to the beach along a small craggy path so its advisable to wear good walking shoes. However, if you get here early you definitely won’t regret taking a dip in the vivid turquoise waters of this sheltered cove.

Gortyna located near Agia Deka, 45km southwest of Heraklio dates all the way back to the Neolithic times. According to Greek mythology, it is the site of Zeus and Europa’s love affair. Gortyn has also been mentioned by Homer as one of the flourishing fortified cities of Crete. It once served as the capital of Roman Crete from about 67 BC until AD 824 when the island was raided by the Saracens. Today the ancient ruins are in two sections, separated by the highway. The 6th century Byzantine Basilica of Agios Titos is the most prominent monument in the fenced-off area. A Roman theater, the Odeion, from the 1st century BC is located a few steps away. However, the highlight of a visit here is the massive stone tablets which have the 6th century BC Laws of Gortyn inscribed on them. The 600 lines of the code provided historians and archaeologists with a deeper insight into what life was like at that time.