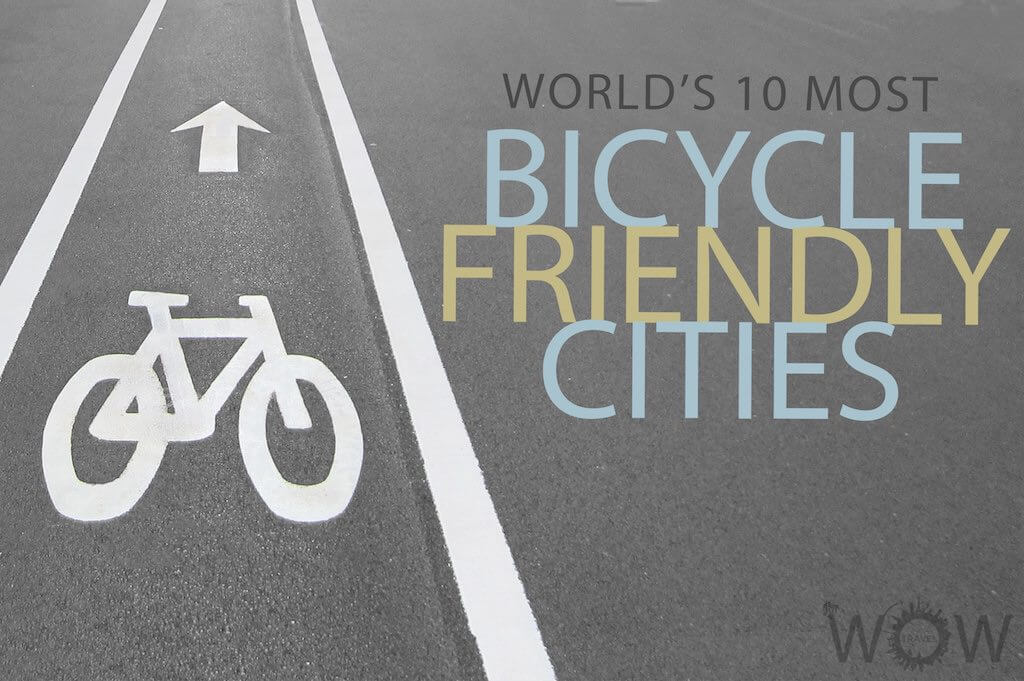 There are lots of cities where it is good to be a cyclist, but some are a true paradise for two-wheelers. As more environmentally friendly methods of travel are being embraced throughout the world, a number of countries have begun to reinvest in one of the oldest means of travel: the bicycle. Our list of the World’s 10 Most Bicycle-Friendly Cities has been made by different parameters such as bike facilities, social acceptance, and a general perception that cycling is safe.

The privilege of hosting the 2014 World Cup and the 2016 Summer Olympics firmly places the international spotlight on both a nation and the cities within. As a host city for both events, Rio de Janeiro has been revamping the landscape in preparations for the great number of tourists that will travel to the city. However, Rio’s association with cycling can be traced back to the Rio Climate Summit in 1992, which saw cycling tracks created along the famous Copacabana beach. This development proved to be a success, and the city now has a modest but ever-expanding network. The city has had success with a new bike-share program, and while still behind the truly elite cycling cities, Rio looks to be taking the right steps toward modernizing cycling in Brazil. Source: escapehere

Montreal is a city with a lively bike culture. With 645 km (400 miles) of trails throughout the city, including paths that pass through tourist centers likes Old Montreal and the downtown area, there is certainly an infrastructure here to make bicycle-powered sightseeing possible. Montreal boasts a number of dedicated bike paths, some with lane lines similar to those seen on roads. The bike scene does not slow down in winter, with the city removing snow from paths, sometimes even faster than it is plowed from the streets.  Source: mnn

Tokyo, one of the biggest cities in the world, the overpopulated home to over 13 million people and capital of the largest car producing nation on the planet, is surprisingly among the most bicycle friendly cities in the world. Tourists can get around quite easily on bicycle here. In fact, many locals choose two-wheelers as a convenient means of transportation that allows them to avoid traffic jams and the sometimes-crowded public transit system.

Western Australia’s capital is laced with more than 700 km (435 miles) of paths, bike lanes, and bicycle-friendly streets. Indeed, the Perth Bicycle Network is touted as “one of the most extensive and advanced cycling networks in the world.

Barcelona has fully integrated cycle lanes and you can cycle through the city’s open spaces and parks. Barcelona’s Bicing program, one of many mass bike rental systems that have popped up recently in Europe and beyond, debuted in 2007 in the Catalonian capital. An annual Bike Week is held in late May to spread the word.

With Wide streets, bikes in parks and great cycling culture Berlin has highly developed bicycling infrastructure and it is estimated that it has 710 bicycles per 1000 residents. 15% of traffic in the German capital comes from bicycles, and the city boasts 1,030 km (640 miles) of bike paths, as well as an online bike-route planner. Berlin also has many bike-friendly hotels with amenities such as secure bicycle storage, rooms for drying clothes and equipment, and tools for simple repairs and maintenance.

Designated street lanes, independent bike paths, traffic signals and bike maps, making Basel a very bicycle-friendly city. The best place in town for starting your adventure is the Rent-A-Bike underground bike park, in the center. There are specific bike trails that connect to other parts of Switzerland. These bike trails are indicated by signs at some intersections. When you’re visiting, make the best of your stay at one of the 11 Best Hotels in Basel.

Minneapolis in Minnesota as a varied bicycle network that connects all parts of the city. The city boasts 193 km (120 miles) of what it calls ‘on-street bikeways’ and 145 km (90 miles) of off-street lanes. Minneapolis’ growing network of bike lanes and a well-used bike share program making it the only U.S. city to rank among the world’s top 10 cities for cyclists.

With more than 400 km (250 miles) of urban bicycle paths, Amsterdam is perhaps the first European city that comes to mind when you think of cycling, and indeed it is one of the world’s best cycling cities. In Amsterdam, over 60% of trips are made by bike in the inner city and 40% of trips are made by bike overall in the greater city area. The city is equipped with an elaborate network of cycle-paths and lanes, so safe and comfortable that even toddlers and elderly people use bikes as the easiest mode of transport.  But the pursuit of spinning happily alongside canals and over bridges has become so popular the city is running out of bicycle parking space.

Copenhagen is the most bike-friendly city in the world, knocking Amsterdam out of the No. 1 spot. The city with more bikes than people, at a rate of 5 bikes to 4 people. Many cities in Europe have taken steps to make cycling the dominant form of transportation in cities, but Copenhagen is the gold standard among them. The Danish capital is packed with crosstown bike lanes and bicycle bridges and is “impressively consistent in its investment in cycling as transport and in making efforts to push it to the next level.