Top 10 Things To Do In Montreal 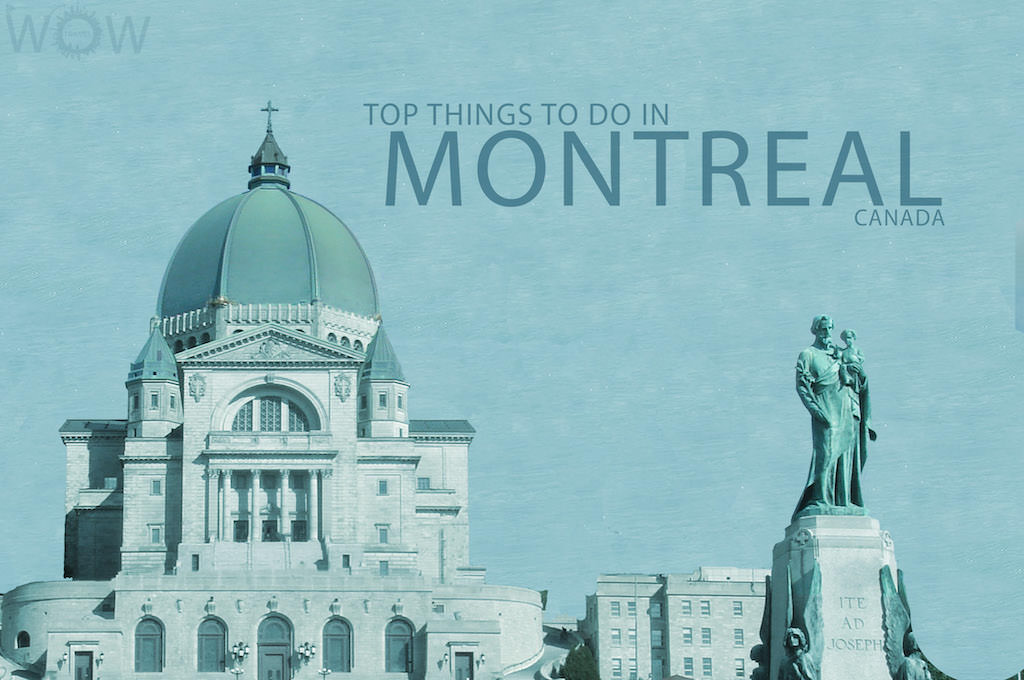 It is the second-largest French-speaking city in the world (after Paris), originally called Ville-Marie, Montreal is named after Mount Royal, the triple-peaked hill located in the heart of the city. The main city of Montréal occupies a 48 km (30 miles) long island along with the convergence of the St. Lawrence and Ottawa rivers. The island is linked to the mainland by a tunnel and 15 bridges though most of the city’s main attractions are within a decent walking distance of one another. Montreal diversity of restaurants, attractions and festivals make it the perfect destination, whether your goal is romance, sightseeing or family fun. Here are 10 reasons to put Montreal at the top of your list.

The iconic spherical structure was originally the United States pavilion at Expo 67, this 1967 World’s Fair designed by noted American architect Buckminster Fuller. In 1995, the structure was redesigned and became a museum dedicated to the environment. Located in the heart of Montreal at Parc Jean-Drapeau. Visit its educational exhibitions to get a better understanding of major environmental issues: air, water, biodiversity, climate change, sustainable development, and much more.

To get a panoramic view of Montréal head to the top of Mount Royal – a majestic multifunctional city park and the tallest point in the city. Designed by Frederick Law Olmsted, who created New York City’s Central Park, this park boasts a vast network of walking paths and stairs that will lead to you a variety of wooded areas and landscapes. Magnificent lookouts offer breathtaking views of the city and region.

Designed by Irish architect James O’Donnell and built between 1824-9, Basilique Notre-Dame was built in the neo-gothic style, this grand structure is chock full of beautiful details, with extensive stained glass windows, beautiful works of art and wood carvings. The basilica also houses le Gros Bourdon, one of the largest bells in the world, which weighs more than 12 tons. Don’t miss the fine art paintings in the nave and the impressive Chapelle du Sacre-Coeur hidden behind the altar.

One of Montreal’s most remarkable attractions, Parc Olympique is also one of its most controversial. Built for the 1976 Olympic Games, it remained unfinished until the 1980s, despite a cost of $1.4 billion, and the retractable roof over the stadium has never full worked. Nevertheless, visitors can easily spend a full day or two entertained by the varied exhibitions, sights and activities. The Olympic Stadium includes the tallest inclined structure in the world, a tower that stands 175 meters (583 ft) tall that’s built at a 45-degree angle. For a spectacular panorama of the city, visitors can ride in a funicular up to the observation deck at the top of the building.

St. Joseph’s Oratory was designed in an Italian Renaissance style with a copper dome rising 97 meters (318 ft) high making it one of the biggest of its kind. The Oratory was built as a monument to St. Joseph and thousands of people from all over the world make the pilgrimage to Montréal to visit the famous site. The inside of the basilica is decorated with intricately carved murals and thousands of votive candles leading to the crypt. St. Joseph’s Oratory receives several million visitors each year (the most devout Catholics climb the basilica’s 99 steps on their knees).

Enjoy a visit to the most frequented museum in Canada, welcoming more than a million visitors every year. Discover its unique encyclopedic collection of over 41,000 works, and its original temporary exhibitions featuring unusual presentations of an array of artistic disciplines-fine art, music, fashion and design.

These gardens are considered one of the world’s best. The Botanical Garden offers 10 exhibition greenhouses, more than 30 gardens with the colors and fragrances of the world and more than 22,000 species and varieties of plants.

Beneath the city streets, you will find the underground city; an enormous underground structure integrated into the city’s major commercial districts. It is known for being the largest underground complex in the world, containing and linking to over 200+ restaurants, 1,700 boutiques, 30 movie theatres, halls, museums, and hotels, all connected to 10 of the city’s subway stations. This unique feature has made people often refer to Montreal as “two cities in one” and can allow visitors to explore the city without having to worry about bad weather or lengthy travel time between the city’s shopping districts.

With nearly 100 gaming tables and approximately 3,000 slot machines, the Casino de Montréal offers one of the largest game varieties in North America, an electrifying experience, and a festive atmosphere. Breathtaking views of the city, four restaurants with distinct ambiances, four lively bars, and the show Vintage with Gregory Charles ensure memorable moments.

The minute you enter Old Montréal, modern life seems but a distant memory. As you leisurely wander around the Place Jacques-Cartier, gaze at the grandeur of City Hall and stroll the quiet side streets, you’re magically transported back in time. Then, you turn the corner and come face to face with lively terraces, art galleries, boîtes à chanson, quadricycle rides, shows and museums… so much to see and experience! Not to mention skating on the giant ice rink and Igloofest on the Quays, better with each passing year.