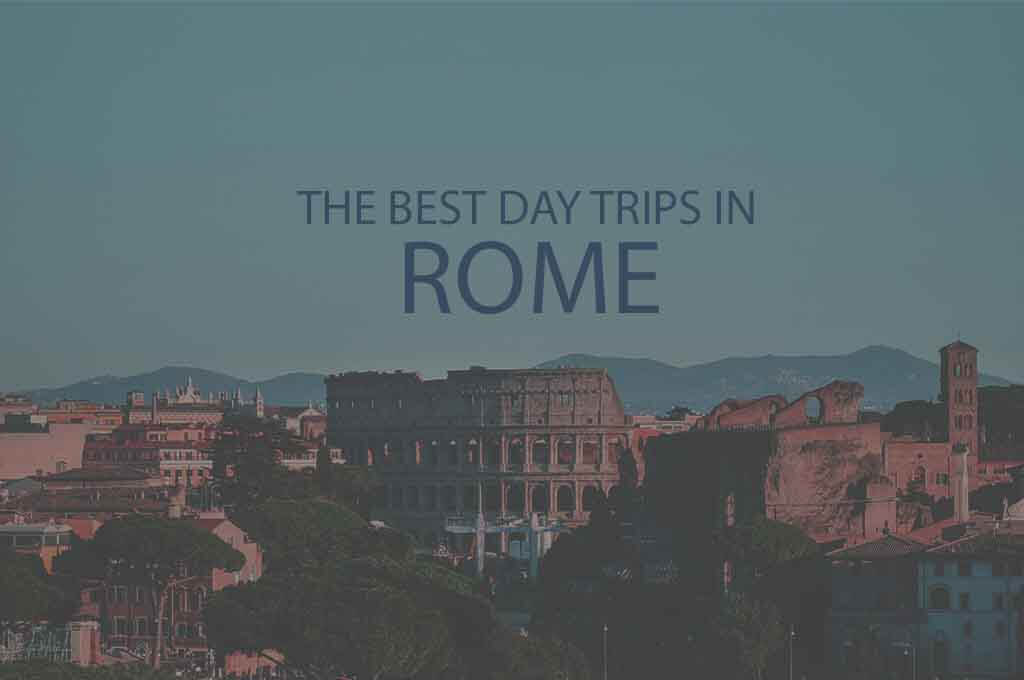 All roads lead to Rome, and that adage is as true today as it was a few hundred years ago. The scintillating and vibrant Italian capital is one of the most culturally significant cities in the world. The “Eternal City,” as it’s famously known, has more than 900 churches and 280 fountains. What’s more, St. Peter’s Basilica is the world’s largest church ever built. If that wasn’t enough, there’s a museum dedicated entirely to pasta! Clearly, there’s so much to do in Rome that you could easily spend months here and still not explore the city completely. This list of the best day trips in Rome will help you crack the code on the must-sees and must-dos. What’s more, it’ll help you prioritize your itinerary if you are in this city for a limited amount of time.

And since Rome has so many things to see – including housing one of the world’s smallest countries, Vatican City, within its folds – this list of day trips is invaluable. To that end, here are the 13 best day trips in and from Rome, Italy.

Check out the Egyptian Corinthian columns, walk on the original marble floors, and be enthralled by the structure’s engineering secrets. Your guide will also tell you about the immense diameter of the tomb and its famous oculus, making you feel like you’re in a Dan Brown novel! Discover pagan stories behind parts of the structure and learn all about the history of the catacombs and the popedom.

Who doesn’t know about Pompeii and the wrath of Mount Vesuvius? Discover this ancient city and listen to its stories on this Full-Day Trip of Pompeii and Mt. Vesuvius Volcano on this best day trip from Rome. An air-conditioned bus takes you to Pompeii, one of the most famous lost cities in the world. Here, you get to skip the line and walk amongst the ruins. Snap pictures of what was a thriving civilization done in by the wrath of an angry volcano.

After visiting Pompeii, you drive up the slopes of Mt. Vesuvius, one of Europe’s last active volcanoes and one of the world’s biggest volcanoes. For those who’re interested, they can join the short yet scenic hike up to the steaming crater. There, you’re treated to stunning views of Sorrento and Capri. The route to the mountain is shut during winters, so the tour continues to Naples instead. You’ll get to explore this wonderful coastal Italian city’s museums, castles, and galleries.

One of the best day trips in Rome is this St. Peter’s Basilica Guided Tour along with a Papal Audience. This amazing four-hour tour begins with a special, early-access visit to the Papal Audience ceremony. This takes place at St. Peter’s Square, one of Europe’s most beautiful squares. After a gathering of prayers, blessings, and a homily, make your way to the iconic St. Peter’s Basilica for a guided tour. Spy masterpieces by Bernini and Michaelangelo and marvel at the architecture of this stunning Renaissance-style church. For the complete experience, we’d recommend selecting the tour with the option of touring the Vatican Gardens. It comes with an open bus ride and insightful commentary by a knowledgeable local guide.

The magic of the Amalfi Coast is well-known throughout the world. After all, it’s one of the world’s most scenic drives. Discover the delights of this region on this Day Trip to Amalfi Coast and Positano. A high-speed train whisks you from Rome to Naples, after which a minivan takes you along the spectacular coast to the enchanting town of Positano, one of the most beautiful and must-visit places on the Amalfi Coast. It’s one of Southern Italy’s most beautiful villages, and it’s easy to see why. Think narrow, cobblestoned streets, a vibrant harbor, and tons of small cafes, bars, and bistros to enjoy the local cuisine. Snap pictures of the typically Mediterranean architecture, which is distinctive of the Amalfi coast.

This Catacombs & Crypts with Roman Aqueducts Tour is one for history lovers, culture vultures, and Dan Brown novels enthusiasts. This tour takes you to the darker side of Rome to parts of the city that very few people ever see. Your tour begins with three amazing sites with extraordinary secrets of Ancient Rome, including the labyrinthine catacombs. Next, head to the “Bone Chapel,” a.k.a. the Capuchin Crypt, whose walls are decorated with the bones of thousands of monks. Finally, your tour takes you to the Roman Aqueducts, one of the most spectacular sites in all of Rome, which you’ll see from a vantage point.

This Assisi & Orvieto Day Trip from Rome is the best day trip from Rome to these Umbrian hill towns. After leaving Rome, drive along the Tiber Valley to reach the Etruscan town of Orvieto, complete with a magnificently gothic 14th-century cathedral. Later on, move to the green vineyards and olive groves of Tuscany to taste some of the best local wines. After a traditional local lunch, drive along Lake Trasimeno’s shores to reach Assisi, the birthplace of St. Francis.

The tour will take you around Townhall Square, this childhood home, the church where he was born, and the Roman Temple dedicated to Minerva. You’ll love the most visiting St Francis’ Basilica, where you can click pictures of the magnificent frescoes. The tour ends with a visit to Santa Maria Degli Angeli, where the saint died in 1226.

The Borghese Gallery is one of Rome’s most popular museums, and this Borghese Gallery Tour with Gardens is one of the best day trips in Rome to explore it. Skip the line on this guided walking tour of one of the world’s most beautiful art museums. Right from Bernini’s and Canova’s sculptures such as “Apollo and Daphne” to Caravaggio’s “Boy with a Basket of Fruit,” this gallery has it all. As you see the stunning masterpieces and frescoes, the guide will also tell you stories and secrets of Ancient Rome. Later on, stroll through the lush Borghese gardens, complete with trees, lakes, and spectacular views from the Pincio Terrace.

Escape the crowds in Rome and head east to lush lands on this Day Trip to Tivoli, Hadrian’s Villa, and Villa d’Este.
Board an A/C coach and head to the UNESCO World Heritage Site of Hadrian’s Villa, a 2 AD retreat for Roman Emperor Hadrian. Your guide runs you through history as you explore the archaeological ruins with thermal baths, theaters, statues, and temples. After a delicious local lunch, the romantic Villa d’Este awaits, where your guide will tell you all about the intriguing history of the Renaissance. The stunning gardens at this former Benedictine convent are an Instagrammer’s dream – think pools, impressive waterfalls, and the famous Fountain of Neptune.

If there’s one image of Rome that everyone recognizes, it’s that of the magnificent Colosseum. This detailed Colosseum Tour with Arena Floor, Underground, the Roman Forum, and Palatine Hill is sure to leave you enthralled by the end of it. This incredible tour takes you back in the gladiator era, even as your licensed guide regales you with tales, facts, and stories about this monument. The tour also takes you to the Roman Forum, which was the economic and political center of the city. And finally, a tour of the Colosseum is incomplete without exploring the Palatine Hill, which was like the “Beverly Hills” of Ancient Rome! The high hill was meant for the nobles and emperors to reside, high above the commoner below.

Discover two amazing cities in one go on this Florence and Pisa Full-Day Tour from Rome. This best day trip from Rome Depart from Rome takes you to the rolling Tuscan countryside, even as your guide tells you the history of this stunning region. Florence is a stunning city bursting with Renaissance architecture, science, art, and history and has wonderful sights such as Vecchio Bridge, Mercato Nuovo, and Piazza del Duomo, among others. You can even dig into delicious Tuscan cuisine and desserts. In fact, Florence is one of the best luxury honeymoon destinations, making this perfect for newlyweds! Next, head to the UNESCO World Heritage Site of Piazza Dei Miracoli in Pisa. It’s home to not only a Romanesque cathedral but also the iconic Leaning Tower of Pisa.

One of the best day trips in Rome is to one of the world’s best museums, the Vatican Museum. This guided Vatican Museum and Sistine Chapel Tour will help you explore one of the world’s greatest art collections. Your licensed guide tells you a litany of fascinating facts and histories. Walk around the Gallery of Maps, Gallery of Tapestries, and the Rotunda and marvel at the gorgeous frescoes, intricate tapestries, ancient statues, and baroque ceilings. Next, you proceed to Michaelangelo’s crowning achievement, the world-famous Sistine Chapel. As you gaze at the creation, your guide even tells you secret messages that are said to be hidden in the painted ceiling frescoes!

What could be better than taking a break from Rome’s crazy crowds and escaping to the undulating lush landscapes of Tuscany? Sit in air-conditioned comfort as this Tuscany Taster Tour whisks you to Tuscany, with your well-versed tour guide explaining the region’s rich cuisine, culture, and history. Your day begins with a walking tour of hilly Montepulciano straight to the bowels of an ancient but functioning wine cellar amongst pre-Rome ruins.

Next comes the 16th-century Renaissance church of San Biagio, followed by a delicious three-course Tuscan lunch with wine pairings. You enjoy this at an authentic vineyard farmhouse, where you can even buy wine! Your final stop is Pienza, where you can shop for local specialties such as wines, balsamic vinegar, and pecorino cheese or walk the streets like a local.

How about journeying back to a time of extravagance? This Domus Aurea Guided Group Tour takes you to the opulent Golden House of Nero, the crazed Roman emperor. This huge and awe-inspiring palace might also be a symbol of his massive ego. Nero’s party pad is all about spacious rooms with soaring vaulted ceilings and majestic frescoes and has been painfully restored after his successors bulldozed it. As you tour the excavated ruins, your guide gives you an insight into the life and times of the nasty Roman emperor. Did you know that there even was an artificial lake on these premises? It was filled in ages ago, and today, the Colosseum stands in its place!