Top 12 Things To Do In Assisi 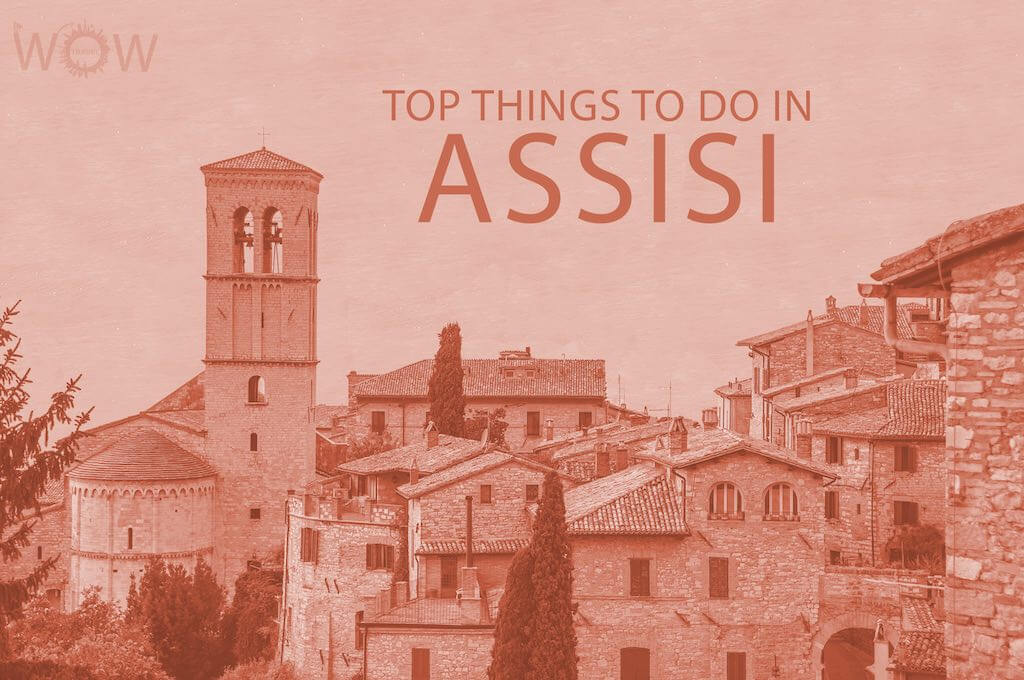 One of the most visited pilgrimage sites in Umbria, Italy is the medieval town of Assisi, renowned as the birthplace of Saint Francis, who founded the Franciscan order. Assisi dates back to the 7th century as an early Umbrian settlement which was conquered by the Romans four centuries later. Traces of its Roman past are still visible in some of the buildings and streets. Although Christianity was introduced in the area by Bishop Rufino in 238 AD, Assisi’s strong Christian connection is attributed to Saint Francis. Assisi is renowned for some amazing works of art and is also a UNESCO World Heritage Site with a majestic castle overlooking the whole area.
[booking_product_helper shortname=”assisi”]

The iconic Basilica of St. Francis which is spread majestically on a hill can be seen from miles. The foundation stone for this iconic landmark was laid by Pope Gregory IX a day after St. Francis was canonized in the 13th century. Two churches make up this sprawling complex; the Gothic-style Basilica Superiore and the older Romanesque Basilica Inferiore. The dimly lit lower church is adorned with frescoes but the ones to look out for are the four above the main altar which represent the ‘four great allegories’ that St. Francis described. The upper church which was built later, between 1230 and 1253, has one of the most famous pieces of art in Italy, the 28 frescoes that depict the life St. Francis. These colorful and realistic frescoes are said to have been painted by Giotto and his pupils, but their authorship is now a subject of debate in the art-history community. These frescoes are long considered to be one of the turning points in Western art for their human portrayal of Christ.

In the Cripta di San Francesco of the lower church is the stone sarcophagus of the saint. The tomb with the Saint Francis’ remains lay undiscovered for almost 600 years beneath the basilica. When the saint’s remains were brought here from the temporary resting place in the 13th century, it was hidden for fear of it being stolen and dispersed. In 1818, the tomb was discovered after digging for more than fifty days. It was restored in 2011.

The present building of the Cathedral of San Rufino was constructed in the 12th century, the third church to be built on the same site. It is dedicated to Saint Rufino who is said to have brought Christianity to Assisi and died a martyr. The church is another important pilgrimage center as it is the place where both Saint Francis of Assisi and Saint Clare were baptized. The Romanesque facade of the cathedral is typical of the 12th-century churches of Umbria. The interior, however, was completely modified in 1571 to a late Renaissance style. In 1946, the Chapel of Our Lady of Consolation was built after a miracle was witnessed of Our Lady weeping. The 15th-century German terracotta sculpture which was the scene of the miracle has since been stolen and a wooden replica now stands in its place.

A striking pink and white striped facade and a huge rose window, set this church apart from the rest. The church which was founded in 1265, is dedicated to one of Saint Francis’ staunch disciples, Saint Clare, who gave up her riches just like Francis to work for the poor. The remains of Clare were transferred here in 1260 and remained hidden under the high altar for 600 years until they were unearthed in 1850. Today a crystal coffin in the church’s crypt contains the remains. The coffin lies beside the Byzantine cross, Crocifisso di San Damiano in front of which Saint Francis is said to have got his call from God.

The ancient Roman building located in the Piazza del Commune currently houses the church of Santa Maria Sopra Minerva. It was built in the 1st century BC and was probably dedicated to the male demi-god Hercules whose dedication stone was discovered. The temple was thought to have been dedicated to Minerva because a female statue had first been discovered here. The church was built in 1539 and renovated to the current style in the 17th century. However, the facade of the ancient with six Corinthian columns was preserved. One of Giotto’s frescoes in the Basilica of Saint Francis shows barred windows on the medieval building which historians believe served as a jail.

Dating back to Roman times is the main town square Piazza del Commune, which is still the heart of the town. Cafes and shops line the square and the surrounding streets. The Temple of Minerva dominates one side of the square with the 47 meters tall Torre del Popolo beside it. The tower was built in 1303 to house the family of the Captain of the People. Beneath the Piazza, you will also find the remains of the towns ancient Roman forum which was discovered in the 19th century. The Piazza is a great place to take in the surroundings and watch people.

Located to the northwest on the edge of the hill connected to the upper and lower church of the Basilica of Saint Francis is the Sacro Convento. The monastery is considered the spiritual center of the Conventual Franciscan order while Assisi is considered the mother town. A scriptorium library, a refectory, papal hall, dormitory and chapter hall were part of the original Sacro Convento but during the 15th century, the friary was enlarged under Pope Sixtus IV. It then served as a summer residence of the popes. A theological institute was established here in 1971 and became a theological training center. A museum of art donated by pilgrims over the centuries is also housed here.

Standing majestically over the town of Assisi the 14th century Rocca Maggiore is a site worth exploring. The first documented evidence of the castle is from 1173 by German diplomat and Catholic Archbishop Christian of Mainz during the reign of Emperor Frederick I Barbarossa. Emperor Frederick II the future king of Sicily also lived at the castle. When the city passed to the Guelph of Pope Innocent III in 1198, extensive damage was caused to the fortress. The fortress was reconstructed in 1356 to strengthen the fortification of the town. A long wall connects a tower at the end from which you can get stunning views of the valley below. The slots which the archers used to defend the city can also be reached via winding staircases and small passageways.

Built in 1615, by means of a generous gift from Phillip III of Spain on the presumed site of the birthplace of Saint Francis, the baroque domed church was the last church to be built in Assisi at the time. When the Spanish Vicar General of the Franciscans visited Assisi in 1613, he was saddened to see the original home of the saint falling apart. With the help of the Spanish Embassy in Rome and the monetary help of the king, he bought the home and built the church over it. The high altar is built over what was considered to be St. Francis’ room. Frescoes created by renowned Italian painters, Cesare Sermei and Giacomo Giorgetti adorn the walls of the church.

In a steep forest gorge on Monte Subasio, about four kilometers from Assisi is the hermitage complex of Eremo delle Carceri. Carceri means isolated places or prisons and is derived from the Latin word ‘carceres.’ In medieval times the area was popular with holy men including Saint Francis who often came to the caves located here to pray and contemplate. Legend has it that Saint Francis tossed a troublesome demon into a hole in the smooth pink stone called the Hole of the Devil which is still visible. Visitors can visit the cave where the saint prayed and the stone bed on which he slept. Various buildings have been added around the caves and the original oratory, but the place is still extremely peaceful.

Basilica of Saint Mary of the Angels

At the foot of the hill of Assisi about 4kms west of the main town is the huge Basilica of Saint Mary of the Angels built between 1569 and 1679. A 9th-century chapel, the Porziuncola, is enclosed within the walls of the basilica. This little chapel is one of the most sacred places for the Franciscans as the young Francis of Assisi is said to have renounced his worldly goods here. Frescoes by artists of different periods embellish the simple Porziuncola. Look out for the beautiful six-part fresco in the apse. The cell where Saint Francis breathed his last, the Chapel of the Transito, is also located here. The interior of the Mannerist styled church is quite simple with minimal decorations, in sharp contrast to the decorated side chapels. Also noteworthy are the Rose garden and the Rose chapel within the complex.

The first monastery of the Order of Saint Clare was built in the 12th century for the community of Saint Clare. Prior to becoming a monastery for the nuns, the church was where Saint Francis would come to pray. It was here that Francis received God’s message while he was praying before the cross. The cross has since been shifted to the Basilica of Saint Clare and a replica installed in its place. In 1212, the convent became the home of Saint Clare and her community who lived here until her death in 1253. They then moved to the chapel of San Giorgio as it was felt that this convent would be too dangerous.