Top 14 Things To Do In Sicily 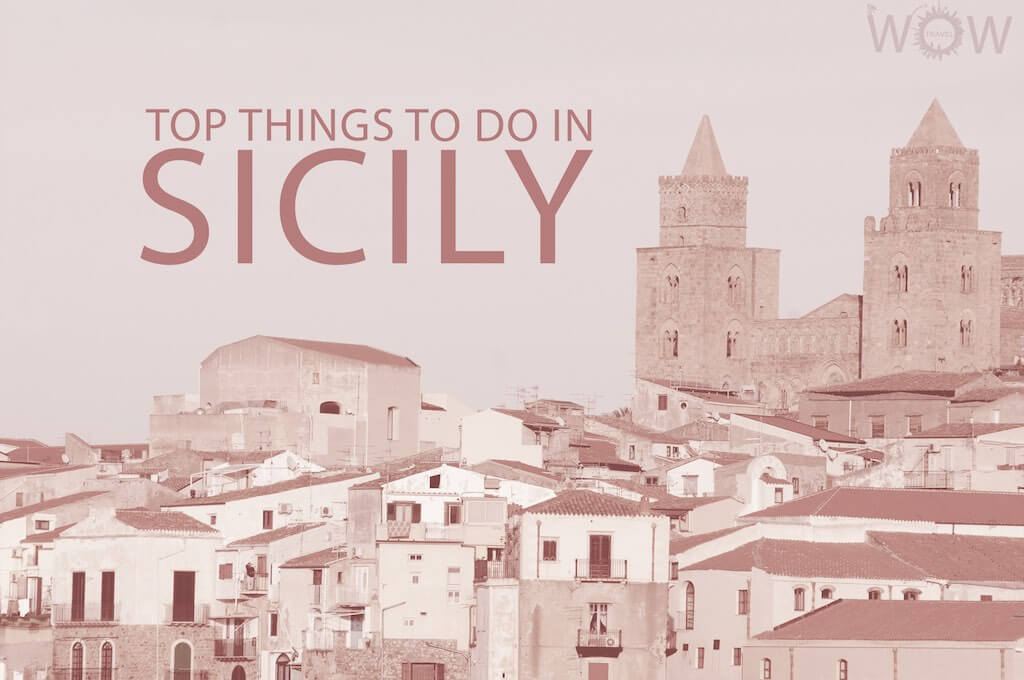 Sicily is the largest island in the Mediterranean, located at the tip of Italy. A crossroads of east and west, north and south, the Italian island of Sicily is endlessly enticing to visitors from across the globe. Come see the results of more than two thousand years of ancient Greek, Roman, Byzantine, Arab, Norman, and native Sicilian intermingling of cultures, foods, and architecture.
[booking_product_helper shortname=”sicily”]

Cathedral and Cloister of Monreale

Be prepared to be dazzled by the mosaics as you enter the Cathedral. Completed in 1176, it was designed by Islamic architects and built of limestone and lava stone. The iconography is Greek-influenced and depicts the triumph of Christianity from the Old Testament through the Acts of the Apostles.

Visit this village for the beautiful views and signature castle, Castello di Venere, built by the Normans. Erice is known for its beauty, its sweets, and its crafts. Make sure you try the marzipan, genovesi ericine, and mustaccioli cookies. If you are looking for souvenirs, you won’t go wrong with the hand-woven carpets or hand-decorated ceramics.

Located about 160 km southeast of Palermo, this baroque masterpiece of a city will enthrall you with its charm and beauty. You can spend days wandering around looking at the churches and palaces. There are numerous festivals and fairs throughout the year. If you’re lucky, you might be there for the Festival of Mustard and Prickly Pears. The food is incredible.

You can get a closer look at the highest volcano in Europe by either hiking or skiing up the side. Even from the bottom, it is an incredible site. Volcanoes have been erupting from this site for about 570,000 years, and it continues to be one of the most active volcanoes in the world.

Palermo is known for the world-class street food found in its ancient markets of Vucciria, Ballaro, Capo, and Borgo Vecchio. In a single visit, you can taste foods from all of Sicily’s many traditions; everything from boiled octopus to cedars served with salt.

Ragusa is a beautiful ancient city that was essentially rebuilt after a major earthquake in 1693. There are now two pieces: Ragusa Superiore, the new town, and Ragusa Inferiore (Ibla). You can get to Ragusa Ibla via bridge or stairs to enjoy the variety of baroque architecture and the traditional Sicilian food at the bottom of the hill.

The city was established by the ancient Greeks in the 5th-4th century BC on a plateau between two peaks of a mountain. The Doric temple is a remarkable display of artistry preserved through the ages. Higher up the slope is the Segesta Theater, partly cut into the rock. In the same area, you can also see the Sanctuary of Mango. There are relics from the 8th century BC to the medieval city built by Arabs and Normans.

Once the largest city in ancient Greece, today Syracuse is a living history lesson. The Greek Theatre continues to hold performances of the Greek tragedies as it has done for millennia. Ortygia Market offers authentic Sicilian foods which will draw you in with their amazing aromas. Castles, temples, fountains – Syracusa has it all.

Taormina is a hilltop town on the east coast of Sicily. Start at the ancient Greek Theatre with the view of Mt. Etna and the bay of Naxos. Go through the Porta Messina (northern entrance to the city) and watch history unfold in front of you. Churches and government buildings from the 13th century are followed by a small theater built during the time of Caesar Augustus Octavian. Of course, before you leave, you’ll need to stop by the 14th-century Palace Dukes of Santo Stefano.

Valley of the Temples

Step into the valley, and you can almost see yourself in ancient Greece. Possibly the most well-preserved set of Greek temples in the world, they sit amidst almond groves in the bright sunlight. Also the site of a necropolis and various sanctuaries.

You will enjoy wandering around the villa, experiencing what home may have looked like for an aristocratic Roman in the 4th century AD. The mosaics on the walls have disappeared but the ones on the floor are amazing. They are a testament to the skilled African mosaic workers of that period.

You’ll see Sicily as it was before it was inhabited at the Zingaro Reserve. You can walk for seven kilometers through an undisturbed wilderness, seeing animals, birds, trees, rocks, beaches, and the sea.

Messina is the third biggest city in Sicily after Palermo and Catania. This beautiful city is full of artworks in its churches and old palaces which carry the remembrance of its great ancient civilizations. It’s known for the Norman Messina Cathedral, with its Gothic portal, 15th-century windows and an astronomical clock on the bell tower.

Built by the Greeks on Sicily‘s northern coast, this medieval town has maintained its original old look and ambiance and nowadays attracts thousands of tourists every year. You’ll find here sandy beaches, a picturesque historic town on a rocky headland, some high culture in the shape of a fine Norman cathedral, decent transport links, Sicilian food and sunshine all add up to make the town one of Italy’s most attractive seaside destinations. Planning to visit? Make sure to stay at one of the 11 Best Hotels in Cefalu.