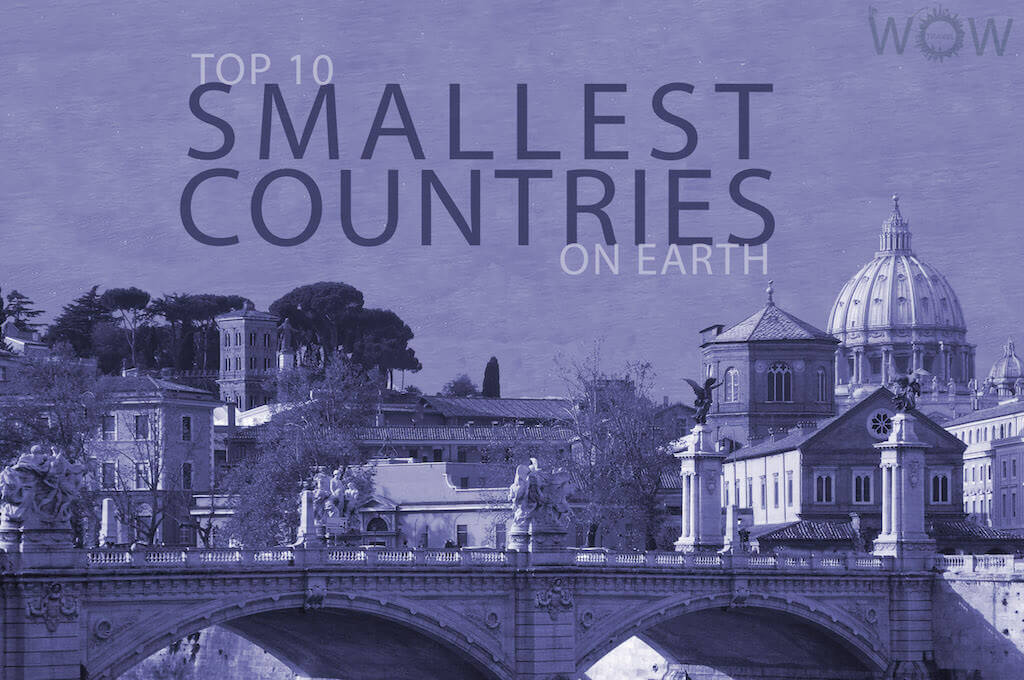 There are 196 countries in the world today, according to eight accepted criteria used to determine whether a place is an independent country (also known as a State) or not. From the word “Country” some may think of a large area of land with lots of people residing, but some of the countries on earth are so small that the cities of other countries are monstrous compared to them. For those who venture into these extremely tiny countries, there are many strange and exotic treats to behold. Find out which are the Top 10 Smallest Countries On Earth.

Grenada is an island country and sovereign state consisting of the island of Grenada and six smaller islands at the southern end of the Grenadines in the southeastern Caribbean Sea. Carib Indians inhabited Grenada when Christopher Columbus discovered the island in 1498, but it remained uncolonized for more than a century. Grenada boasts silky stretches of white sand beaches, sunken treasures adorned by corals and unspoiled landscapes undiscovered by crowds. It is also known as the “Island of Spice” due to the production of Nutmeg and mace crops of which Grenada is one of the world’s largest exporters.

Malta is a small, island country in the Mediterranean between Sicily and the North African coast. It has 7000 years of history with prehistoric temples, beautiful architecture with an ancient heritage, fossil-studded cliffs and glittering hidden coves. It is world famous for its thrilling diving opportunities with its crystal-clear blue waters, some of the cleanest in the Mediterranean.

Consists of 1,190 coral islands and spread among 26 major atolls (200 inhabited islands), Maldives is an archipelago of islands quite unlike any other. The Maldives is recognized for its amazing coral reefs, hardly touched by illegal fishers, which is why its reefs are in such pristine condition. It houses so many different species of fish, making it a world-renowned snorkeling and diving location. It is a paradise for couples and families as well, with its white sandy beaches, warm crystal clear waters, exhilarating water sports and luxurious resorts with pampering spa treatments.

Located in the Leeward Islands chain of the Lesser Antilles, about one-third of the way from Puerto Rico to Trinidad and Tobago, Saint Kitts and Nevis is the smallest sovereign state in the Americas. When Christopher Columbus explored the the two mountainous Caribbean islands of St Kitts and Nevis in 1493, they were inhabited by the native tribes. But the Europeans didn’t colonize until the British arrived in 1623 and today most of the inhabitants are the descendants of African slaves. Here you will find intoxicating natural beauty, sunny skies, warm waters, and white sandy beaches.

The Principality of Liechtenstein is a small German-speaking country doubly landlocked by Switzerland and Austria. It was established within the Holy Roman Empire in 1719 and became a sovereign state in 1806. Liechtenstein is mountainous and it is mostly popular as a winter sports destination. The most popular landmark is the Vaduz Castle located in its capital Vaduz, the home of the reigning prince of Liechtenstein and the Liechtenstein princely family.

The Most Serene Republic of San Marino is a must-see destination for lovers of history and for those who love picturesque panoramas. Surrounded by Italy on all sides, this high-GDP micro-state of only 35,000 residents is indeed an enclave of calm. The medieval architecture, the warm Mediterranean climate and the fantastic heritage are all a part of San Marino’s charm. San Marino boasts an impressive assortment of museums, art galleries, elegant jewelry shops, boutiques and shopping centers as well. The city has tons of accommodation options. Check out our list of 11 Best Hotels In San Marino.

Tuvalu, one of the most remote nations in the world in the South Pacific, is an independent island nation within the British Commonwealth. Its 9 islands comprise of a vast expanse of ocean interspersed with atolls, magnificent lagoons, coral reefs and palm-fringed beaches. In Tuvalu you will discover a distinctive Polynesian culture of atoll island people who vigorously maintain their unique social organization, art, crafts, architecture, music, dance and legends.

Nauru, officially the Republic of Nauru and formerly known as Pleasant Island, is a potato-shaped island country in Micronesia in the Central Pacific. The exact origins of the Nauruans are unclear since their language does not resemble any other in the Pacific region. Germany annexed the island in 1888. A German-British consortium began mining the island’s phosphate deposits early in the 20th century. Australian forces occupied Nauru in World War I; it subsequently became a League of Nations mandate. After the Second World War – and a brutal occupation by Japan – Nauru became a UN trust territory. It achieved independence in 1968 and joined the UN in 1999 as the world’s smallest independent republic. Ready to explore the country? Take a look at our Top 10 Things To Do in Nauru first! Source: cia

The Principality of Monaco is the second smallest state and the most densely populated in the world, although it only has about thirty thousand inhabitants. This tiny country which until a few years ago was blacklisted for being considered a non-transparent tax haven is now the residence of magnates and families of noble lineage whose impressive mansions with private heliports cause the admiration of travelers and visitors. Let us not forget that Monaco is the residence of the Grimaldi family the reigning family of Monaco.

Vatican City is the smallest state in the world, surrounded by Rome, Italy, with a population of under 1,000 who are not even full-time residents. It is one of the most sacred places in Christendom and the temporal seat of the Pope, head of the worldwide Catholic Church. The Vatican City was established in its current form as a sovereign nation with the singing of the Lateran Pacts in 1929.